I love vegetarian and vegan food, but I don't love pretty much any of the "meatless meat" alternatives out there, personally.  I would rather just eat vegetables than chickenless chicken.

I was excited to find this recipe in my copy of Sweet Potato Soul  - cauliflower fried like chicken!  The Boy also thought it was interesting, so we gave it a try. 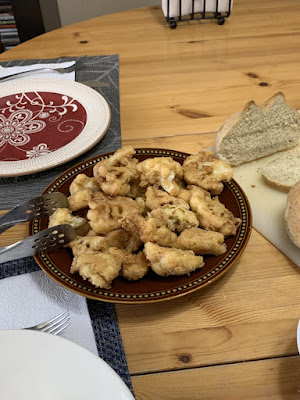 And we loved it! It was easy, as easy as anything fried gets, and it was delicious.  I definitely could have used more of the seasoned flour to get through all my cauliflower pieces, but even though some of the last pieces to get battered and fried were light on the batter, they were still delicious. 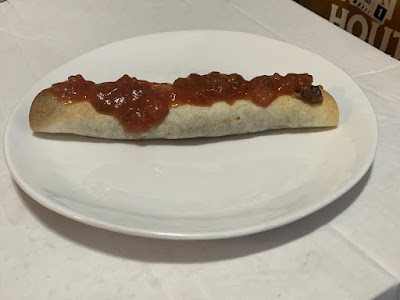 One of the biggest challenges with a 12 year old deciding to become a vegetarian is trying to make him understand that he has to eat.....vegetables.  I'm not sure what exactly he would eat if he was left to plan and prepare his own meals but I think that kid would have scurvy in no time.

I've had this recipe for black bean and sweet potato taquitos bookmarked for years but I was sure the family wouldn't love it and it would be a waste of food and effort.  But now that we have to try new things to keep The Boy fed, I whipped it out and man was it GOOD.  Good and really, not too much work.  I did add cheese to keep other family members happy, and we all enjoyed it very much.  Even the leftovers didn't last long!  This is a definite repeat recipe. 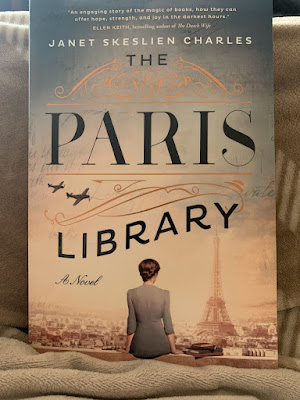 book club 7 - The Aussie Next Door by Stefanie London - audiobook 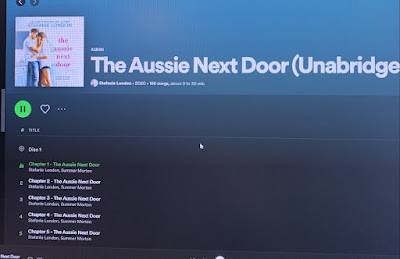 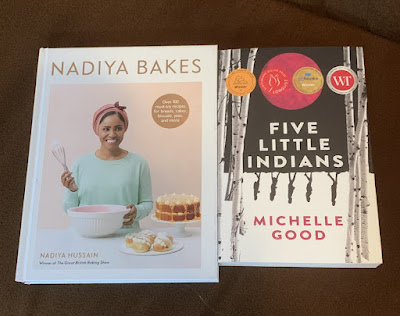 I have not opened either one yet but am excited for both.  I have been very very bad with reading so far this year.  I can't wait for the weather to (finally) warm up so I can sit outside and read.

IT'S THE MIDDLE OF APRIL.  HOW.

This year is sailing by way too fast for my comfort.  This was supposed to be a good year for me, to make some changes and improvements.  Those ground to a halt in March and have yet to restart.

The Boy is still eating mostly vegetarian.  He has had meat but only a handful of times, which is admirable.  I am sure I would have caved by now.  He has agreed to have fish sometimes, so that makes me feel a bit better that he is getting enough protein and whatnot.  He's tried a few meatless meat options and has liked most of them - the deli meats are pretty awful though.  I bought him some meatless deli ham and pepperoni for lunches and snacks.  The Mister and I used to eat the veggie pepperoni when we lived in Calgary as we quite liked it, but either we have changed or it has  - none of us liked them at all.

Tonight for Sunday dinner I'm making a turkey breast roast, and salmon for the boy.  Pie from Chrissy Teigen's book for dessert.  I made it last night  - it needed chilling time - and I'm a bit worried of how it will turn out.  Fingers crossed.

There's lots of blue sky out there this morning, but it's chilly.  Spring is off to a cold start this year.

I made this chicken a few months ago, and it was pretty good.I love pretty much anything with garlic and butter.  Keep those pesky vampires away. 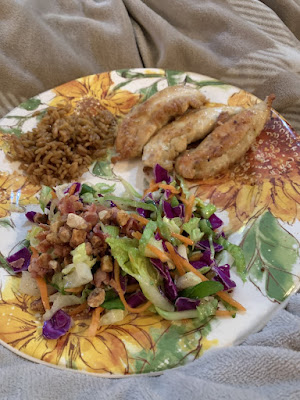 Off to do the Wordle.  Happy Sunday. 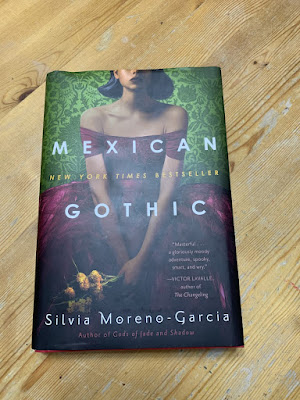 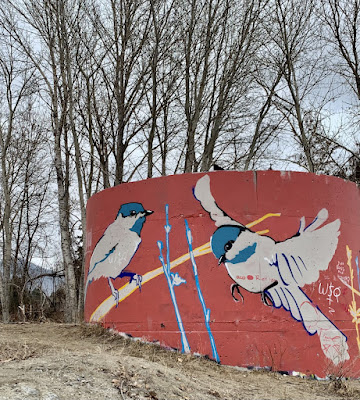 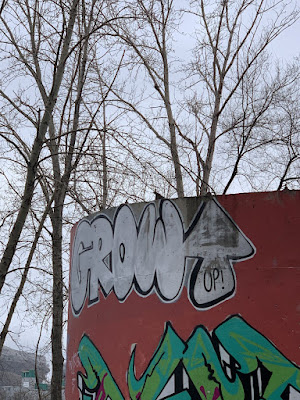 This is not a very exciting list because I am not a very exciting person.  Also I am having a very hard time coming to terms with the fact that it is APRIL.  APRIL 2022.  Where is the time going?  It's all slipping by and I have nothing to show for it.  I'm feeling a little depressed.

Somebody Somewhere - I LOVE Bridget Everett so I was super excited for this one, and it was so great.  My fingers are crossed for a season two. 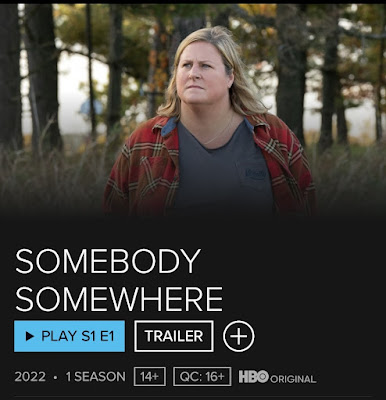 The After Party was very good and I enjoyed it more than I expected to.  Ben Schwartz  needs more roles like this.

I googled American Gods when I was reading the book, because I didn't understand something in the book, and found out they'd made a show.  I watched it and loved the first two seasons (mostly because of Mad Sweeney) but wasn't sad that they cancelled it after the 3rd (because no Mad Sweeney in season 3).  But I would re-watch it (solely for  Mad Sweeney.)

Barb and Star go to Vista Del Mar is one of those movies that is so ridiculous, but you also cannot stop laughing.  It was dumb, but it was hilarious. 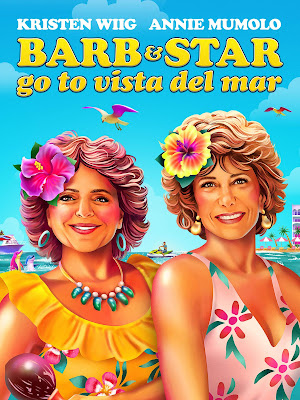 Ted Lasso - we finally broke down and got Apple TV so we could watch Ted Lasso, and I don't regret it one bit. 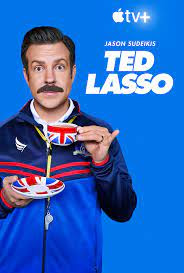 Hawkeye - The Boy is still just a bit into Marvel, and wanted to watch this one and I wasn't excited but said ok.  I have 2 kids and have seen ALL the Marvel movies 11 billion times each and Hawkeye is my least favorite part of all of them, BUT - this is a really good show. 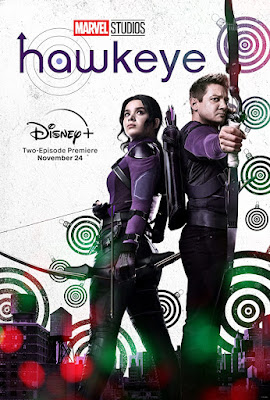 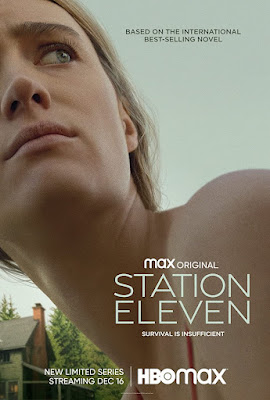 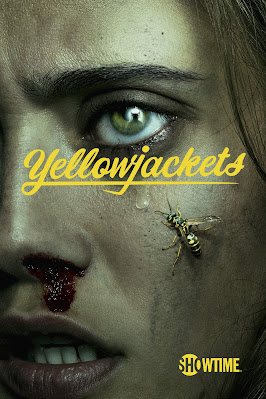 White Lotus - one of those ones where there is not really anyone to like. 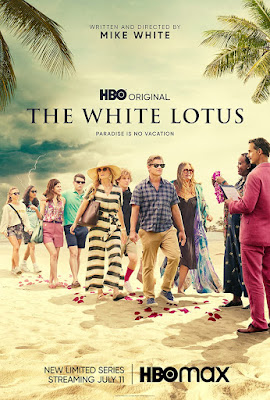 The Tourist - I loved this one so much. 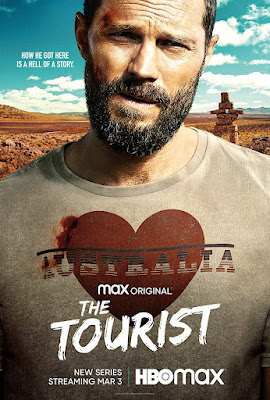 Yellowstone - my boss mentioned this one to me, which was weird, but I put it on my list, and now The Mister and I are binge watching it whenever the kids aren't around.  A truly bonkers show. 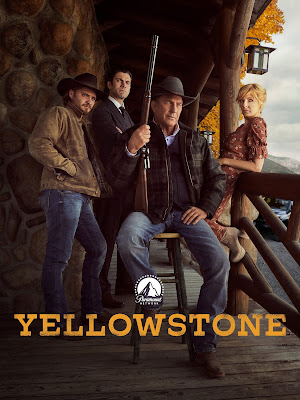 Servant - this one is WEIRD y'all.  I still don't know what I think.  It's on pause for us right now as we barrel through Yellowstone. 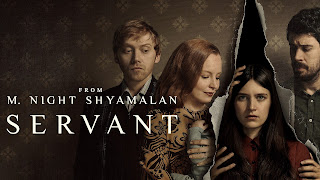 Also one thing that is NOT show related - I have become addicted to Wordle.  I tried it out a few months ago and didn't like it, but I tried again and actually GOT the word, so that certainly piqued my interest.  I don't always remember to do it and I certainly don't always get the word because I get frustrated and impatient, but it's fun. 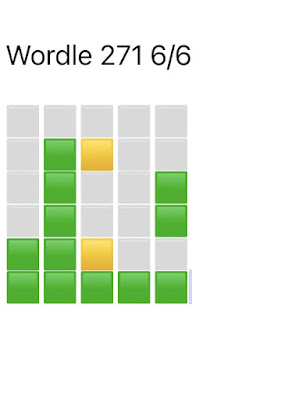 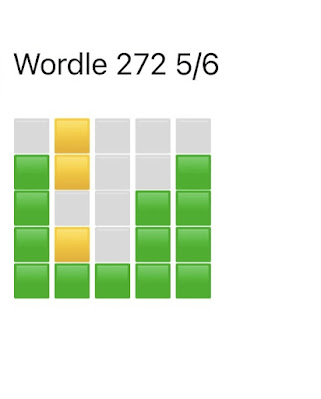 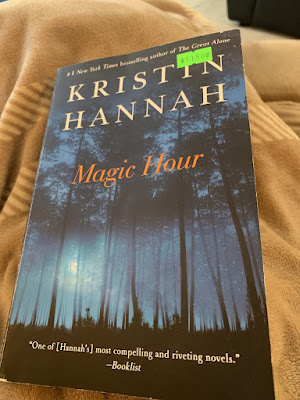 cookbook clean up 29 - Come and Get It by Ree Drummond

This is the second Pioneer Woman/Ree Drummond book to hit the cookbook clean up, and I assumed I'd bought them both second hand, but a search on ye old blog shows I bought this one new back in 2017.  Huh.

So this is Come and Get It! and it's in the same style as her other books and the same thing happened with this book that happened with the last one....I made a few things and then the book has sat, untouched, for months.

We tried Peachy Pancakes and My Mom's Muffins.  And Mini Turkey Meatloaves and Caramel Apple Sundaes.  They were all good!  But I looked at my list of recipes to try and flipped through the book again, and I'm just not interested.  Nothing wrong with this book, but just another one not for us. 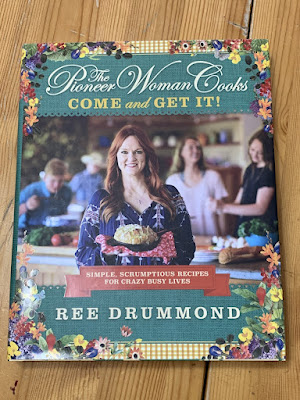