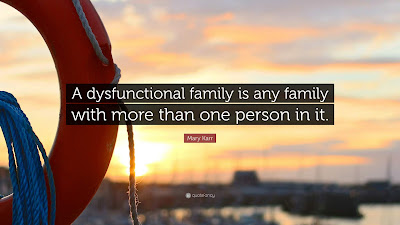 Labels: its a brand new day 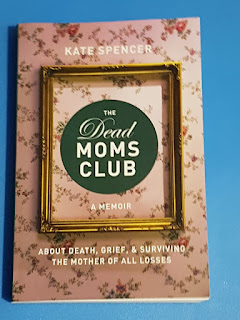 "Almost every day I look up to the sky and think, Are you here?  Are you seeing this?"

"She is nowhere, but she is everywhere too." 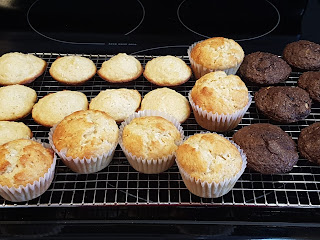 My family is cruel and often prefers store bought baking over my own.
These 2 recipes were a hit with them though.
They aren't all bad all the time, my family. 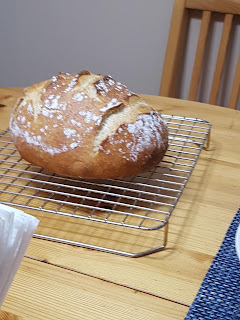 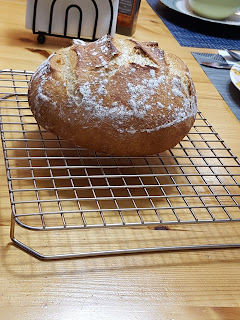 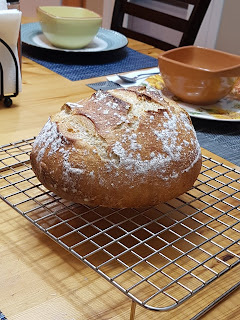 Getting this one from all angles 'cause it's so lovely. 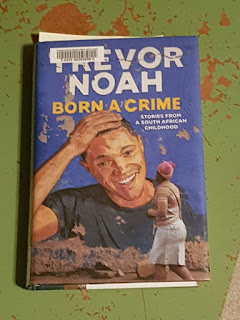 "Love is a creative act.  When you love someone you create a new world for them."

So much room in the freezer.  So much happiness at getting it cleaned out!

Did I mention I have a small life?

So last time I had the following to deal with -

I made another batch of turkey stock and it got used up on a chicken pot pie with biscuit crust AND  a batch of Mac and Cheese done in the instant pot.
The ham became ham fried rice which the kids loved.
The meat pies are still in the fridge freezer.
The apple muffins got taken to work because no one here was eating them.
Seafood patties got eaten.
Hawaiian chicken got postponed because we had too many leftovers.

Last week was a tough one - I was short on time for menu planning, and we had a couple of nights already set so I didn't need much.  I planned on heating up the leftover container of seafood stew I found, and  to use the hawaiian chicken that hadn't gotten used the week before.
I took a bag of buns out for sandwiches etc.

We are getting into weird territory now - 2 (or possibly more) bags of hashbrowns, so much frozen spinach - both store bought and home frozen.  Spicy sausage that I know the kids won't eat.  Coffee beans.  Lots of black bananas.

Also - I found TWO MORE half bags of ice.  I married a hoarder.

Neither the seafood stew or hawaiian chicken got eaten as we had so much leftovers from our lunar new years dinner and enchiladas.
The buns didn't defrost well and only a couple got eaten before they started to go moldy.

I have just finished my menu plan for the week and not much from the freezer is involved.

I'm going to use a block of frozen spinach for some creamed spinach tonight.
I'm going to turn some leftover holiday turkey into turkey cakes for tomorrow's dinner.

I found a freezer bag with a ground beef/pork combo we will use for Taco Tuesday.

The Hawaiian chicken is optimistically on the plan for Friday's dinner, but that is so far away who even knows what will happen.
Posted by Sara at Sunday, February 10, 2019

I haven't been taking too many Sunday Dinner photos, or even making a good effort to remember what we had, but here's a super good one from Chrissy Teigen - Thai Fishcakes with Peanut Sauce followed by a completely decadent dessert of chocolate peanut butter blondies.

The fishcakes were very easy to make - I left out the spice for the kids and the Grandfather and they were still perfect.  Peanut sauce is my very favorite and this was a very good one.

The dessert was amazing too and I think we all gained a couple of pounds before we even cut into it.  So rich and good. 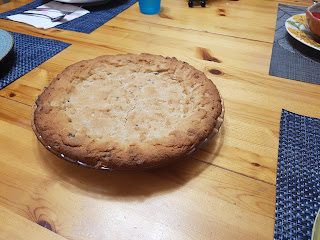 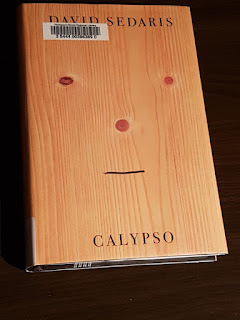 "Our silence translated to: Let's pretend we didn't hear that."

"The times I miss her most are when I see something she might have liked: a piece of jewelry or a painting.  The view of a white sand beach off a balcony.  How I'd have loved to spoil her with beautiful things."

"Man, oh man," he'll say in my memory, lifting his glass and taking us all in, "isn't this just fantastic?"

My first David Sedaris book.  Heading to the library for another one.
Posted by Sara at Thursday, February 07, 2019

My alarm went off at 5 this morning, and I crawled out of bed at 5:30 to see how cold and snowy it was.
I thought I might do some yoga this morning before I started the less fun jobs but instead I crawled under my blanket in the living room and finished my book.
Got moving at 6:30 - we bought a weather monitor station at Costco last month (The Mister's favorite hobby is obsessing about the weather) and it told me that it was -20 out, with windchill -26.  Wheeeeeee. 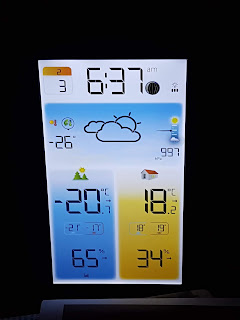 I read my to-do list that I wrote last night and decided to start with cleaning the fridge. 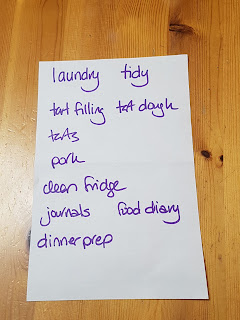 This is the after and it's still very full because we are having a Lunar New Year dinner with my Dad tonight.  Lots of delicious dishes are planned. 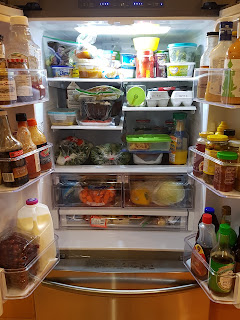 Next I made tomorrow's dinner - Sour Cream Enchiladas.  I am very excited to try this tomorrow; it was easy to make and looks wonderful. 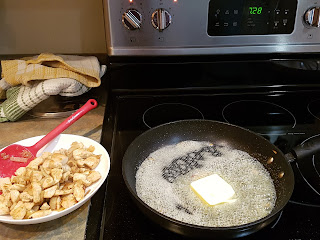 Cheese grated with my Grandmother-in-laws cheese grater.  I hate grating cheese - hate it! - but The Mister wasn't up yet so I did it myself. 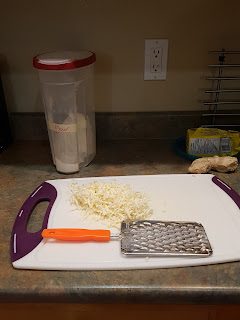 The Girl made herself a peanut butter, strawberry jam and dried apricot tortilla for first breakfast. 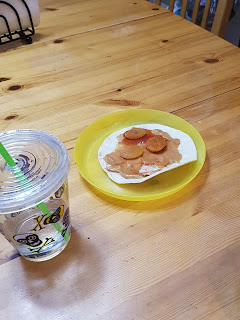 For dessert tonight I'm making pineapple hamantaschen.  I made the filling and the dough early as they both need to chill.  The recipe left out the amount of water needed for the dough - I used 3 TB.  We will see shortly if that works out. 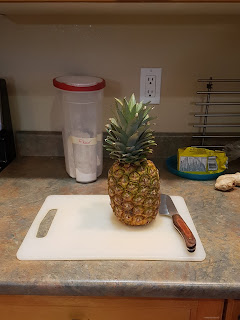 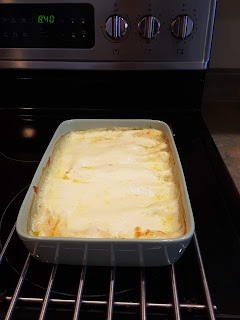 Yesterday morning I read through all the recipes to make my shopping list.  This morning I read them again for timing and discovered that the noodles for the Crispy Chow Mein needed to be cooked in advance so they can dry out, and the shrimp mixture for the Crispy Prawn Balls needs to be in the fridge for a while too.  I cooked the noodles and laid them out to dry, then warmed up the car and drove to my Dad's to get the shrimp. 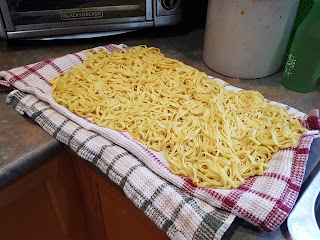 Getting ready to make the Hamantaschen - the filling has cooled. 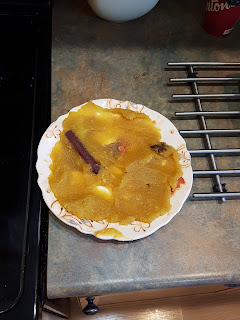 We went to the library yesterday.  Got 2 cookbooks and one memoir.  If I get all the dinner prep done soon, laundry finished, dusting done, and journal work, I can have some reading time! 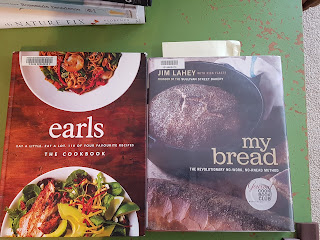 Hope you are having a lovely Sunday.  Stay warm, be kind, do something nice for yourself today.
Posted by Sara at Sunday, February 03, 2019

So The Girl is like many other kids out there and is currently obsessed with unicorns.
I remembered a video someone had shared on The Facebook about how "easy" it is to make a unicorn (or lots of other animals) out of a 9x13 pan cake.
It was her 4th birthday!  A fancy cake was needed!  And so I went for it.

I made the cake (box mix with sprinkles mixed in) the day before her birthday and so the morning of, I was up early to knock this thing out of the park and wow my family.

I realized right away that I hadn't thought about what I would serve the cake on, and I knew we didn't have any sort of tray or pan big enough to hold it.  I knew The Mister would not be excited if I woke him up at 5am to share this info, so I wandered around the kitchen for a bit before deciding I would have to cover my biggest baking sheet with foil and use the back of it.

I covered the pan in foil, and briefly felt a little sting on my hand, but I was too busy getting nervous about how wrong this was all going to go to give it much thought.

Following the video, which by now I had watched 20 times, I made my first cuts: 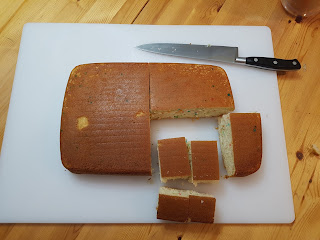 I started to move the pieces to the unicorn shape when I noticed something red smeared on my hand and on a bit of the cake.  It was blood.  I had cut the palm of my hand on the TINFOIL and was bleeding onto the CAKE.  Nice. 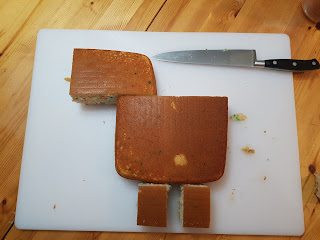 I bandaged myself up, cleaned up all the blood, and trimmed the blood off the cake.  Thank God no one was awake and watching this.
I had realized already that the tray covered in foil looked like crap BEFORE I got blood everywhere, so I trimmed the cake down a smidgy more and left it on the cutting board. 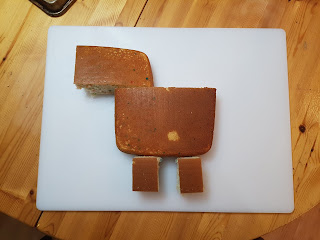 A month before The Girl's birthday, The Boy had his birthday.  I had a cake plan in mind and some ingredients bought - he is very much into Harry Potter lately and I thought he might like a cake like the one Hargid made for Harry - but then a couple of weeks before his birthday he announced that he wanted a totally different cake, so I had the package of white icing and a tube of pink icing already in the cupboard. 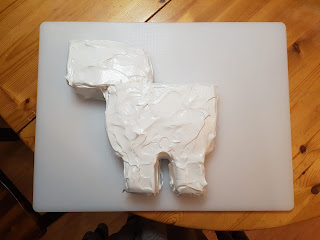 I bought the icing at Bulk Barn, it was some sort of "professional" icing that all you had a to do was add water to and whip.  I had planned on following the video and piping little dots/blobs all over the cake, but this was not that sort of icing.
The pink tube icing went on sort of ok, but it was heavier than the white icing and it was looking like it was going to slide right off the hoofs - which it actually did a few hours later.
The black tube icing was a real pain in the ass and I was getting very frustrated that I couldn't get it quite where I wanted it.
Also, I feared the unicorn looked more like a pig. 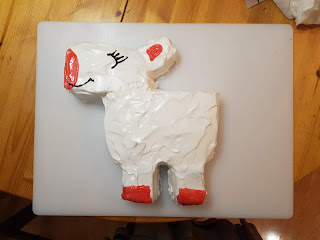 I started working with the little tub of fondant I'd bought at Michaels, and it was wayyyy harder than I thought.  I was getting pretty unhappy about the whole thing.  At this point, The Boy woke up and came into the kitchen and was so excited about how the cake looked.  He flattered me enough to keep me going, and together we managed to get that damn fondant shaped into a horn and tail. 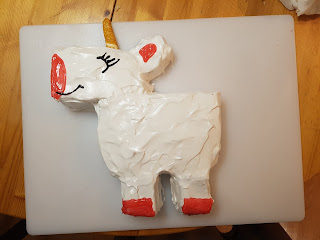 The video we were following also had a rainbow mane, but we didn't have a big enough unicorn to fit one in nicely. 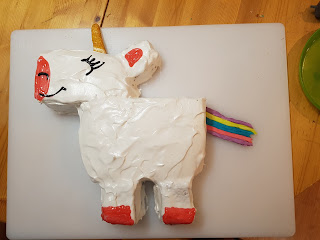 The girl was beyond thrilled with her cake, which made all the blood loss, sweat and tears worth it.

One super weird thing that happened, that you can see the starting of in the last photo, is that the white icing actually began  to dissolve in spots shortly after the cake was done.  The icing on the right leg above you can see it looks almost bubbly.  So odd.