Some things changed (which kids cake I messed up this year), and some things stayed the same (my kids love sugar).

The Boy is still obsessed with The Simpsons, and he wanted another Simpsons cake.  I found online a cake with a photo of Homer reaching up on the cake for doughnuts (homemade of course), but we swapped it out for Timbits.

I bought a couple of 6 inch cake pans so I could get good height on the cake without it being super huge.  I made the cake and icing from scratch, printed the Homer photo, and sent The Mister to Timmy's for the Timbits.

It came together perfectly, into a super cute cake: 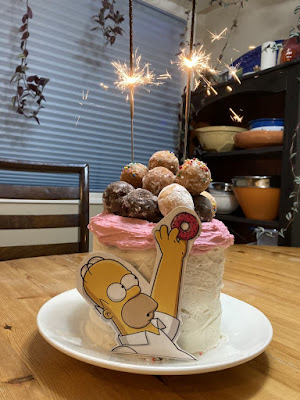 The Boy loved it; he and his sister had plenty of sugar, and everyone was happy.

A month later it was The Girls turn and I am not ashamed to admit, I was worn out.  When she (finally!) decided on a candy cake, I decided to go the easy route and use not only box cake mix but also store bought frosting.

I was going to make a Pinata cake full of candy, so I knew it had to be assembled the day of her birthday so the candy inside wouldn't go all gross.  I baked the 4 layers of cake the night before and was up nice and early to knock the cake out of the park.

Pretty much right away I realized that a 4 layer, 9 inch cake was going to be way bigger than we needed, so I changed it to 3 layers.  Then to make sure I had plenty of room for the candy I cut a very large hole in the middle layer.  Too big, I would realize later.  As soon as I started frosting the bottom and middle layers together, I realized I probably hadn't bought enough frosting.

I kept plugging along, trying to frost sparingly to make sure I had enough frosting left for the outside, but it sure didn't look good. 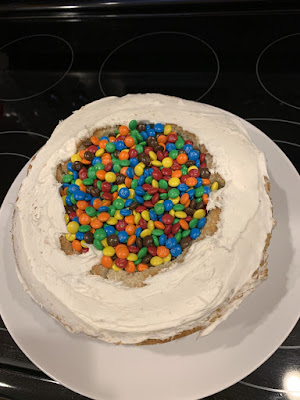 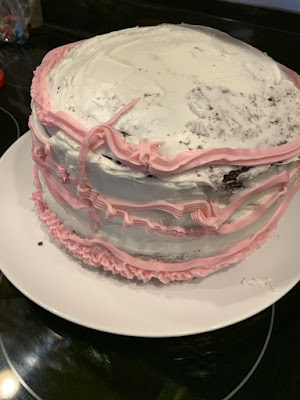 In addition to the tubs of white frosting I'd also bought a can of frosting with a variety of nozzles you could use to do your final decorating.  I wasn't going to be able to save that for the decorating, I was going to need it to try to frost the cake.

The spray can of frosting was A PIECE OF GARBAGE.  It was hissing and spitting and would randomly stop dispensing frosting and just shoot out air.  The cake looked bad before; now it looked hideous.

I was hysterical with laughter by this time - what good would getting frustrated and upset do?  The cake looked terrible and I couldn't stop laughing.  I laughed so hard I cried.  Eventually I pulled myself together and smoothed the pink frosting into the white and it just barely covered the whole cake.  Almost. 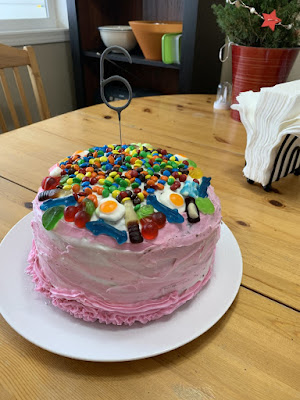 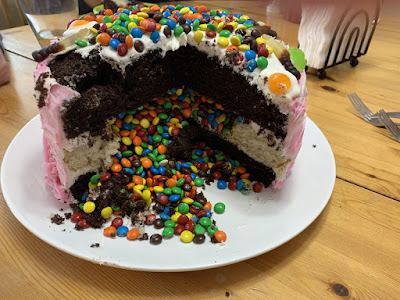 The good thing about 6 year olds is that if their cake is covered in candy, they don't give a hoot what it looks like.

After we ate some cake, (sooooo sweet) I told The Mister that he's in charge of birthday cakes in 2021.  Mom needs a break. 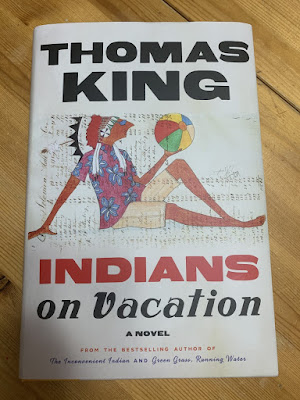 I've always wondered if doctors are like politicians, if they actually believe the lies they tell.

"You know, you're only old if you want to be old."

I can't imagine that anyone likes to see anyone in distress, but as soon as I think this, I remind myself that I'm wrong. 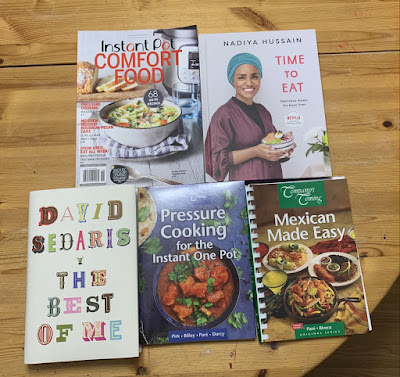 I am very excited about all of them, and I'm sure The Mister was smirking when he heard me on the phone saying how much I love Mexican food and I should cook some soon.  I am looking forward to the Instant pot books as well, anything that can help me cut down on my time in the kitchen is more than welcome.

We binged watched Nadiya Hussain's Netflix show Time to Eat last month, and enjoyed it very very much, and I went online and bookmarked a bunch of recipes to try, including her savory french toast recipe which we've made twice and is so delicious - 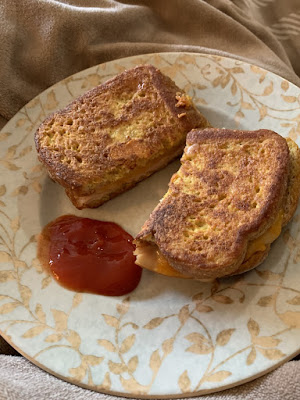 Once I unwrapped Time to Eat, The Mister practically ripped it out of my hands and ran to the kitchen to bake the Olive and Rosemary Crown, with blue cheese inside.  One of the best breads he's baked lately. 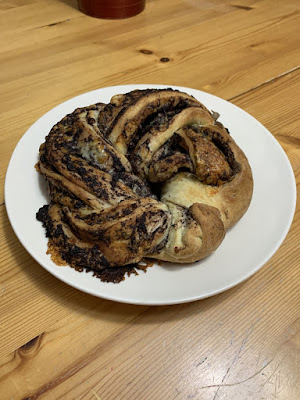 We had a traditional dinner again this Christmas, turkey and veg and the fixins. 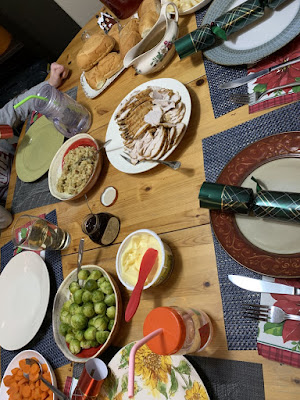 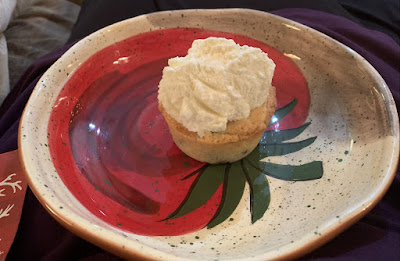 With some of the leftover turkey we made Turkey Tetrazzini.  So delicious!  Makes a ton! 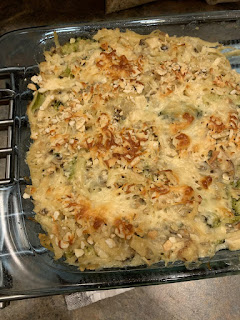 Our first dessert of 2021 was the Post Secret Apple Cream Pie.  Delicious, but very sweet. 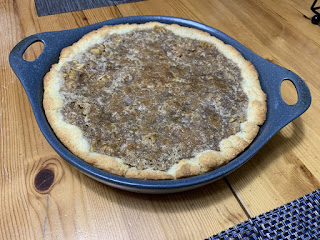 Hope 2021 is.....off to a start?  The last week has already been full of ridiculous news.  Deep breaths. 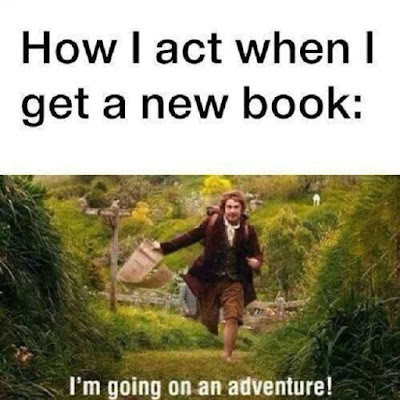 If you take away the audiobooks from 2019 I came out pretty much even with last year.  I could have read more books this year but working lots and plenty of staring off into space contemplating this year kept me busy.

I don't have the same big stack of unread fiction books waiting for me in 2021 that I've had in past years, and I've got a lot of yoga/diet/nutrition/self help books laying around that I should either read or get rid of, and I'd realllllly like to pull myself out of this years long slump I'm in physically and emotionally, so it could be good to get into some of those. 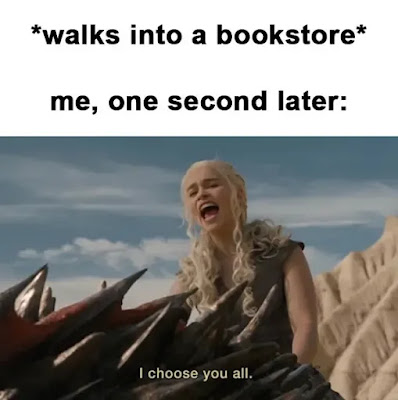 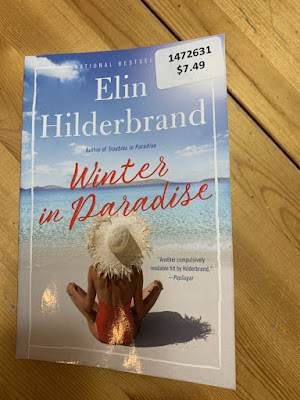 Maybe it's simply one of the unsolved mysteries of human nature: how two siblings, born of the same parents and raised in the same house, can be complete opposites.

"Secrets become lies, and lies end up destroying you and everyone you care about."

Her mother was alive inside of her.  Maia was her own person, but she was also a continuation of Rosie. 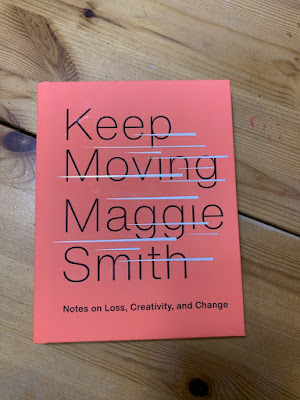 Stop waiting on some grand permission to change your life.  The universe is not going to tell you it's ok.  Tell yourself it's ok.

Reflect on what you've lived through - and look, you're still here.

What's worse than suffering?  Suffering but pretending that you aren't.

Do not allow someone else's choices to run your waking hours or interrupt your sleep. 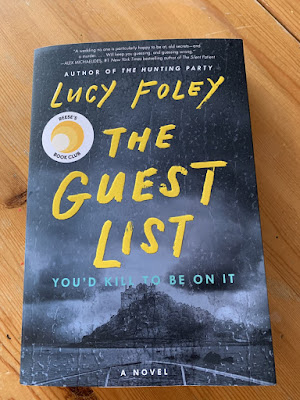 It stands out against the sky like a twisted, long-fingered hand,  reaching up from the ground.  There's a haunted look to it.

Somewhere near at hand they are vaguely aware of the crash of wager against rock.  They can feel the ground shuddering beneath their feet at the impact of it. 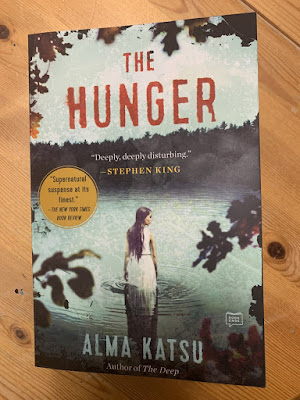 Only now did he close his eyes and imagine Mary's face.  He coaxed it up from the darkness of his mind and held it, let it burn there like a star, his final memory.

"Maybe it takes one demon to keep the others away......Lucifer had been an angel first.  I always remembered that."

Thy looks are a gift from the devil, boy, so you might tempt others to sin. 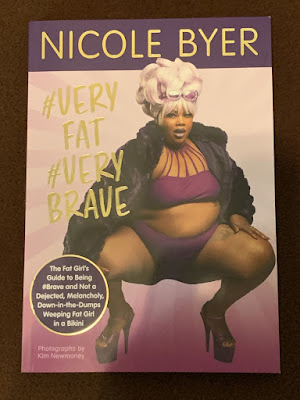 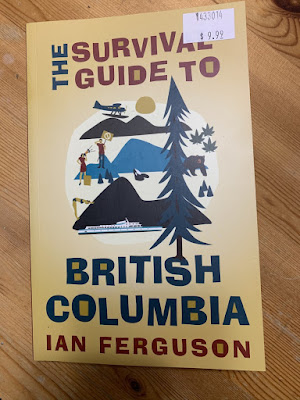 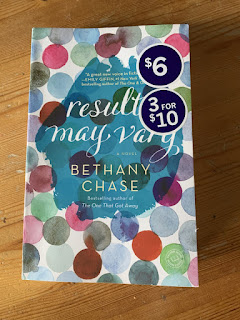 "It's human nature to try to make things not feel as awful as they are, which is why people say garbage like  'Everything happens for a reason.'." 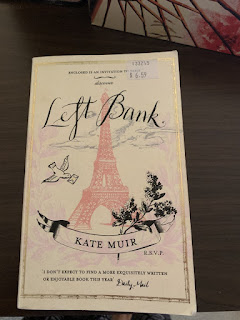 He liked the chance to reinvent himself, to be a slightly different character in each short-running drama.

Madison's love for Sabine burns as though it were sunlight focused through a magnifying glass.

"The most mediocre of males feels himself a demigod  as compared with women." 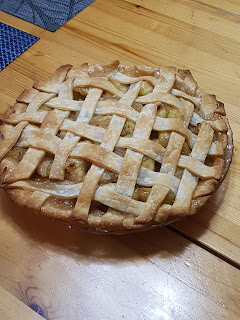