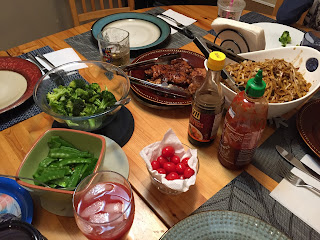 Mmmm!  This picture makes me hungry to have this meal again soon.  We made David Lebovitz's Olympic Seoul Chicken and paired it with Classic Chow Mein and Kylie Kwong's Stir Fried Snow Peas with Garlic and some steamed broccoli.
Mango ice cream for dessert.

I did all the chopping and measuring ahead of time so the cooking was nice and easy.

We have really ground to a halt cooking wise over here.  We've been busy and I've been working a lot, and the kids continue to be so super picky.  The few new things I've made have been met with mostly negative reception, with makes it even less fun to do menu planning and cooking.
I am actively avoiding it now by writing this and soon moving on to yoga and some work I brought home, but it must be done eventually....
Posted by Sara at Saturday, February 25, 2017 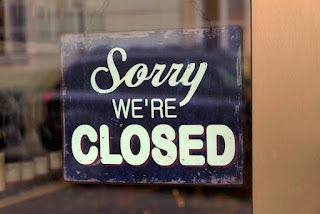 A MESSAGE TO OUR VINYL CAFE COMMUNITY

It is with deep sadness that the Vinyl Cafe family announces that Stuart McLean passed away today, February 15th, 2017, at age 68.
We are heartbroken.
But we are also finding comfort in memories of our dear friend.
Stuart always emphasized that the world is a good place, full of good people, trying to do their best. He believed in people’s extraordinary capacity for love and generosity. And he had faith in our ability to work together for the common good.
He was, in other words, firmly committed to celebrating the positive, joyful and funny side of life. Stuart assured us that even in difficult times, we can find things to be grateful for and ways to laugh. Now that he is gone, we will try hard to do just that.
Stuart connected us – to our country and to each other. He entertained us, he made us think, he made us smile. Occasionally he made us cry. And, through all of that, he reminded us that life is made up of small moments. We never know which ones will be forgotten and which ones will stay with us forever.
So today, and hopefully every day, we’re going to celebrate Stuart’s life by trying to make each moment count and by being grateful for all of them.
We are certainly grateful for each and every moment we shared with Stuart.
We will miss him.

There will be a public tribute at a later date. The family requests privacy at this time.

Book Club - Not That Kind of Girl by Lena Dunham 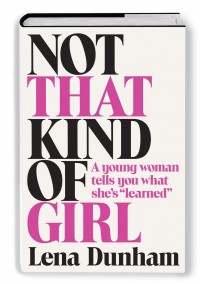 "Men watch out; the ladies are coming for your toys."
Posted by Sara at Friday, February 17, 2017

We had 2 birthdays to celebrate at work, and you better believe I volunteered pretty fast to make a treat for all of us.  It was time for cake.  It should always be time for cake.

The problem was, I volunteered the day before we needed the cake, and we had an activity
that night, and some errands, plus the usual dinner/hysterical playtime/PLEASE
everyone go to bed now so I can too time, and so I had no time to go to the store;
I needed to make something with whatever I had on hand.

I grabbed my Bon Appetit cookbook off the shelf because I remembered from my
testing how many wonderful desserts there were.  My first two picks had to be no'ed
because I didn't have all the ingredients.
I landed on this super easy kitchen staple ready Chocolate and Peanut Butter Streusel Cake.
I know!

In less than an hour the cake was out of the oven and cooling, and because of the streusel
topping I didn't have to ice it, another bonus.  I was a bit worried that the edges were going
to be rock hard as I'd had to add some extra cooking time, but the cake stayed nice and
moist, which was a real bonus as it was a huge cake that lasted a long time. 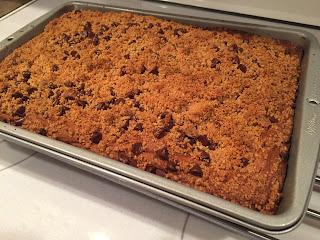 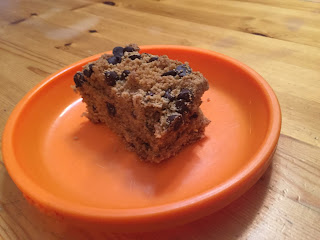 My Mom had gone for lunch with some friends and had Italian Wedding Soup
and really enjoyed it.  She eats a lot of soup, so they bought the canned
variety and hated it (as I told them they would, but...), so I made some
for Sunday Dinner for her.

When we lived in Calgary we used to go to a restaurant that had very good
IWS, and also gave you free bread when you sat down.  Neither of us can remember
the name of it, and so I googled IWS and Calgary in case maybe the restaurant
had been featured in a publication and it would jump out me, but no luck.  But, one from
Toronto's Metro News showed up in the search, (?) so I went with it.

I never would have put carrots in IWS, but it worked, and it's extra veggies,
so there you go.  The soup was easy to make and everyone liked it a lot.
The only thing I would change would be to make more meatballs.  You need lots.
Recipe here.

I made a batch (2 loaves) of Cheddar and Onion Soda Bread.  Excellent. 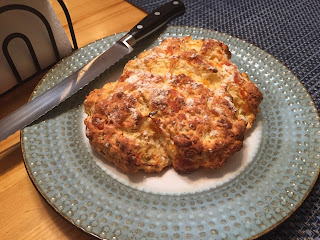 We rounded out the above with some salad and sliced meat.
All 3 in the titles were new recipes - the bread was cheese and onion soda bread from
Paul Hollywood's very good book 100 Breads, and the chocolate peanut butter brownies
were from Ships of the Great Lakes.
Posted by Sara at Friday, February 10, 2017 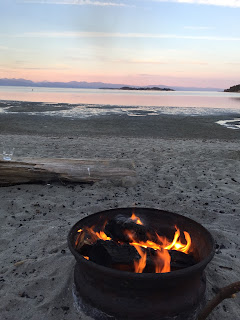 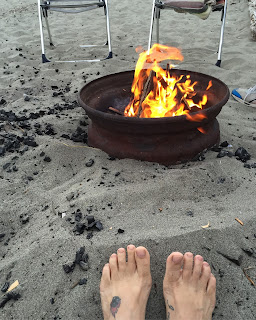 Making : bread has once again become a favorite of mine.  Years ago, documented here, I got into bread making courtesy of some blog people.  I never was as hard core as them, but I really enjoyed playing around with different breads.  The passion went away for a while, but it's come back thanks to a clearance table find of Paul Hollywood's 100 Great Breads.  I LOVE this book.  If you see it, buy it.
Cooking : ugh.  UGH.  I'm still tired of cooking and tired of having to come up with ideas.
Drinking :  Ice tea.  Water.  More ice tea than water.  Need to change that.
Reading: not much these days.  I've become a bit obsessive about reading articles on Facebook and Instagram about how the US and the world are going to hell quite quickly.  This shit is blowing my mind.  So reading actual books has taken a back seat, which I'm hoping to remedy quite soon.  I'm currently reading two books and enjoying neither of them, so that makes it even harder.  I feel compelled to keep going with both, in case they get better, but I would like nothing better than to abandon them both and move on.
Trawling: the internet for article on the silk worm for The Boys science homework.
Wanting:a re-do on the American election.  You guys really fucked up.
Looking: outside at all the snow falling.  I don't find it lovely or peaceful.  Because I have to shovel it.
Deciding: what to do this weekend got easier Friday afternoon.  The Boy is sick, so this is a low key weekend.
Wishing: that my stress eating habits would go away.
Enjoying: my family.
Waiting: for Spring!  I know, it's only the beginning of February, but I can't wait for green grass and warm breezes and walking outside because I want to, not have to.
Liking: this new coconut oil I bought - for your body.  I've had very bad dry skin on my hands this winter - it cracks almost daily - and this is helping a lot.
Wondering: why people can't just be nice.
Loving:those who love me back.
Pondering: why people choose hate over love.  Why they hide behind masks and sayings and pretend to love and proclaim positivity but turn around and judge those who are not exactly like them.
Listening: to Prince and George Michael. Thank you Wal Mart for $5 cd's.
Considering: if we can do some needed home repairs ourselves, or if we are going to have to hire someone.
Buying: from the health food store adds up fast!  I went there the other night to get some chia seeds and vitamins and the brand of body lotion and soap we've started using.  I abandoned the vitamins and got some deodorant for myself, which I've been wanting to try a more "natural" one for a while now, but holy hell, what a price difference between the regular stuff and the natural!  I bit the bullet last night.  And nearly shrieked out loud when the cashier announced my total.  I also bought an empty spray bottle so I can make some natural body spray.  Any suggestions?
Watching: no tv lately.  I watched part of a Christmas special from the Great British Baking Show last weekend, but that was the first "grown up" show we've watched in weeks.  However, we recorded the new Ghostbusters to watch with the kids, and I am excited about that.
Hoping: for change in the world.  Women are not second class.  Neither are Africans, Muslims, LGBTQ, the poor, the ill, refugees, immigrants.  We are all one.
Marvelling: at the stars in the sky.
Cringing: at America.  Really, is there any other answer right now?
Needing: to read more.
Questioning: everything.
Smelling:  nothing,  This one is so weird.
Wearing: A few less options from my closet lately, thanks to this 10 pounds I gained last year that does not want to go anywhere.
Following: or leading?
Noticing: less of the people who are showing me how little they care.
Knowing: that you can't control the actions of other people.
Thinking: that this is not the world that I want for my kids.
Admiring:strong women, who hold themselves and other women UP.  We are in this together.
Getting: broker because we bought not one, not two, but three appliances/gadgets for the kitchen last weekend.  A new toaster oven, a new rice cooker, AND a new spiralizer to replace this one.  We are already in love with the toaster oven and hopefully the other two will be unboxed and used soon.
Bookmarking: recipes.  Yoga articles.  Same old.
Disliking: the news.
Opening: my first jar of Earth Balance Coconut Peanut butter yesterday.  I was the only one in the family who liked it.
Giggling: at Hello, My Name is Doris. Oh, and then crying.
Feeling: so much better with daily yoga.
Helping: myself with meditation didn't work.  I can't get my mind to stop.  Frustrating.
Hearing: the sounds of silence.
Celebrating: some big things this year.  Big birthdays and stuff.  You know.
Pretending: everything is ok.
Embracing: life.
Posted by Sara at Sunday, February 05, 2017