My parents instilled a love of reading in me when I was young. Books were a big part of my life. I loved going to the library (still do) and I welcomed the gift of a new book with as much enthusiasm as a toy. I hope that we'll be able to help Paxton discover this too.

His bookshelf is already quite full of books, from baby books gifted by friends and family, to hand me down books that my parents saved from my childhood, to books Scott and I have bought from the secondhand stores, books we remember loving as a kid.

One new book on his shelf is Theodore Boone, Kid Lawyer by John Grisham. I have read a few Grisham books, including The Firm, which if you haven't read it, or have only seen the movie, go read this book! So exciting. This is his first young adult book, and I was interested to see if he'd be able to take his adult world of law and make it somewhat kid friendly. Of course he can.

Theodore is like any other 13 year old....except he dispenses legal advice to his fellow classmates and is unexpectedly drawn into the trial of a man accused of murdering his wife. The great thing about the book is that it doesn't get cutesy but also doesn't get overly scary. Theo has the fantasy parents and uncle that we all dream about at that age - indulgent, staying out of the way, but always have your back - which makes his lawyer and detective work go that much more smoothly.

Theodore Boone is a fun book and I could see this appealing to kids in the 9 and up range. There is lots of explanation of what lawyers do and how trials work which I imagine would be interesting to kids as well. The only complaint I have about the book is the ending which I found very abrupt. I don't know if that is because there's a sequel coming or if I was so involved I wanted more.
Posted by Sara at Sunday, June 27, 2010

These were the most delicious potatos I've had in a long time, and certainly the simplest. Little nugget potatos boiled until tender in very salty water. When drained, salt crystallizes on the potato skins, leaving them perfectly seasoned. These potatos don't need anything else added to them. 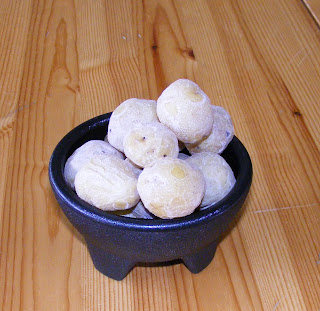 Place all ingredients in a pot, cover and bring to a boil. Reduce heat and simmer until potatos are tender, 20 minutes or so. Drain potatos and let stand for a few minutes so the skins can dry.
Posted by Sara at Saturday, June 19, 2010

Years ago we were planning a trip out of town with some friends of ours who had a kid. She was a stay at home Mom and offered to do some of the initial legwork and enquieries for the trip. Weeks went by, and I remember I turned to Scott and said "Why is it taking so long? She's at home all day!"

It's been a long time since I've baked any bread. I miss it. Sadly it will be even longer as I wasn't able to bake this months bread - Korni from Lien.

Please head over to the list of Bread Baking Babes in the sidebar and check out their takes on this unusual bread. 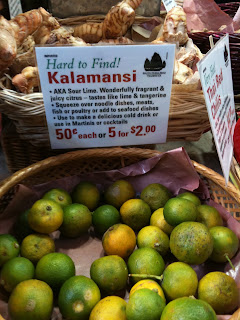 I found these kalamansi aka sour limes in Vancouver. So cute, I couldn't resist. 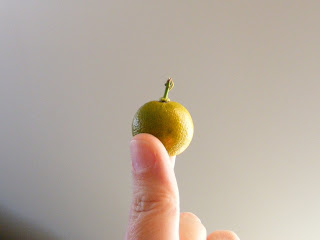 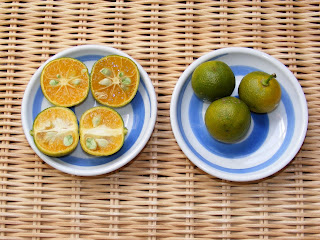 On the inside they look like seedy oranges. Boy, are they sour. I tried squeezing one into water. Not so great. We tried rum and coke with a splash of the juice. Not too bad. But it worked best in a stir fry, with noodles and veggies and garlic and ginger. So delicious.
Posted by Sara at Sunday, June 13, 2010

After graduating from college Sean Aiken was trying to figure out what to do with the rest of his life. Inspired by his father's advice to find something he was passionate about, Sean set out on a one year voyage to discover what he wanted to do. He worked a different job every week for a year - 52 jobs in 52 weeks.

Sean, in his mid-20's and from British Columbia (woot!), comes across as a easygoing, likable guy. His casual writing style made me feel like he was sitting in the room with me, chatting away. He is honest in his writing, sharing with us not only his experiences on the various jobs he tried, but also his frustrations with his undertaking, illness in his family, and finding and trying to maintain love while on his journey.

Between his first job as a bungee jump master and his last as mayor of his hometown Sean was a radio dj, advertising executive, fashion buyer, and park ranger (in Hawaii, no less!), to name a few. Some jobs he liked, some were not his cup of tea, but in all jobs Sean stayed positive and honest, even when it was a struggle. My one complaint about the book is that some of the weeks/jobs had very little written about them, little explanation about the job and Sean's experience. As someone who will most likely never be a framer, veterinary assistant or an innkeeper I found this to be disappointing. Some jobs were talked up way more than others.

Overall I really enjoyed this book. It was fun and interesting and the journey that Sean shares is unique.
And inspired by Seans job in week 19 - Brewmaster - here's a recipe for beer battered onion rings. 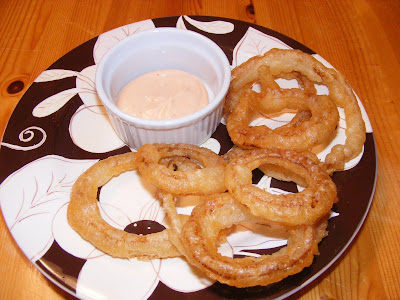 1 cup flour
1 can beer
1/2 tsp salt
onions, peeled and sliced as thin or thick as you like your rings
oil

Whisk the flour and beer and salt together in a large bowl. Set aside to rest while you prepare your onions and heat the oil. Heat your oil in a fryer (as much oil as instructed by your fryer) or a couple of inches in a pan to 350'.
When your oil is hot, dip the onion rings, a few at a time, into the batter and carefully add to the oil. Cook until golden brown, turning to brown both sides.
Remove the onions from the oil and drain on paper towels or newspaper. Season with more salt if desired, and serve while hot.
Posted by Sara at Saturday, June 12, 2010