Scott made this fabulous salad for dinner on Monday night; a quick meal before I left for school. It was very fast to put together and was so flavorful. If we loved it this much in the winter I can only imagine how great it will be on a hot summers night. 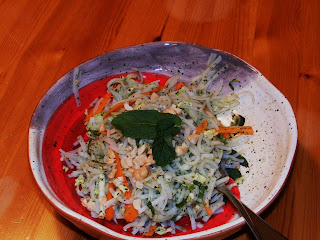 Place the garlic, cilantro and hot pepper in a food processor, process until coarsely chopped. Add the sugar, lime juice, and fish sauce or salt and blend again. Let sit while you chop the vegetables and cook the noodles.

Cook the rice noodles until just tender in boiling water. Drain and rinse with cold water until the noodles are cool. Place in a large bowl.

Toss the noodles with the vegetables and dressing. Garnish each serving with peanuts and additional mint.

My fellow Babe and just all-around lovely person Astrid of Paulchens Food Blog is hosting this week's Weekend Herb Blogging, so I must send this salad full of cilantro and mint for her to include in the round up! See more details here.
Posted by Sara at Sunday, January 30, 2011

I was planning on giving you an exhaustive list of all the recipes in my Book 5 - what I'm going to cook, what I've already cooked, what I'm skipping.
Meh. Do any of us care that much? No, I didn't think so.
I've still got quite a list of recipes to try. So far this has been fun and I'm glad I'm doing it.
Here we go:
Zucchini Tart with Bacon, adapted from The Best Recipes In The World 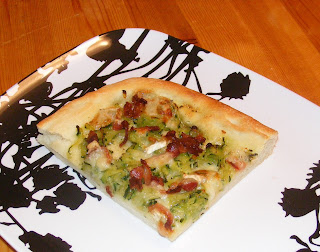 I don't know how much this differs from the original but hot damn this was good. This was GOOD.
Pizza dough (I use my new favorite from Canadian Living's Vegetarian Cookbook)
3-4 small zucchini, shredded
3-4 slices bacon, chopped
3 cloves garlic
brie cheese (or other as desired)
Fry the bacon in a pan over medium heat until cooked but not too well done. Saute the zucchini and garlic in the bacon fat until golden.
Prebake the pizza dough until firm but not done. Top with the zucchini and bacon and sprinkle lightly with cheese. Bake until the crust is brown and cheese is melted.
Red Beans with Cheese, Martha Stewart 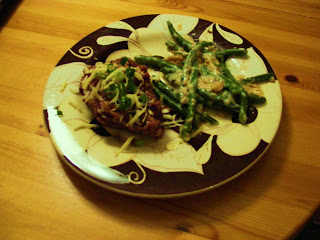 This was a fast, tasty dinner. Versatile too; I spooned the beans over half a baked potato. Scott rolled his in a tortilla with lettuce and tomato. The baby smeared his into his hair. Recipe here.
Black Bean and Corn Tacos, Vegetarian Times 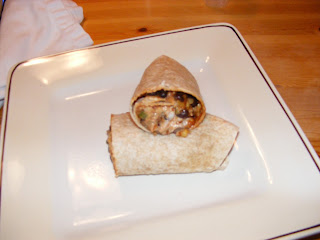 Another keeper. Recipe here.
This was a not very good sweet and sour chicken recipe.  Enough said. 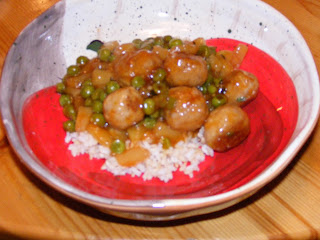 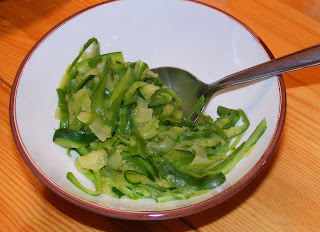 This was pretty gross.  Asparagus and zucchini sliced with a vegetable peeler and cut into "noodles".  Which is good!  The problem is the recipe tells you to cook them in boiling water for 2 minutes, which is at least 1 minute too long.  These were mushy and unappetizing.  We fed them to the baby.
Spiced Shredded Pork, Martha Stewart 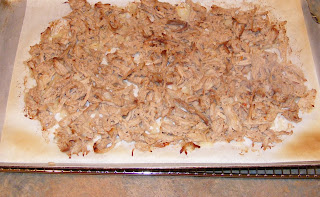 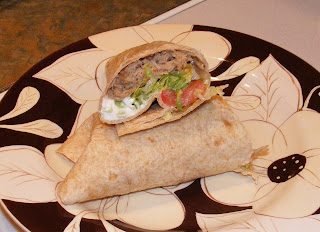 I think one of the best things about this project is rediscovering Martha. I've made some pretty kick ass MS recipes from this book. This one was super good. Recipe here. This is a good make ahead one too, I cooked and shredded the pork, then refrigerated it with the butter and oil and salt and pepper mixed in. The next night all I had to do was broil the pork while I cut the veggies. So fast.
Posted by Sara at Thursday, January 27, 2011 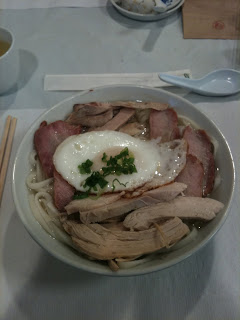 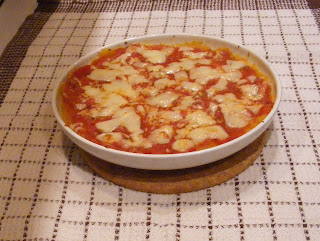 This is a simple to make dish perfect for winter. Cook a spaghetti squash (in the microwave ((PIERCE IT FIRST!)) or oven or steamer) and scrape the flesh from the skin. Rub an oven safe dish with butter and garlic and spoon a little pasta sauce on the bottom of the dish to cover. Season your squash lightly with salt and pepper and add to the dish. Then cover with more sauce, top with some grated cheese (mozza is our favorite) and bake until hot and bubbly.
Serve with salad and bread to mop up the leftover sauce.
Posted by Sara at Saturday, January 15, 2011

Close to the end of market season here one of the vendors was selling the most adorable wee pumpkins. I thought they were decoration only, but the seller told me that they were perfect for baking so I bought a few to play with.
You can see how teeny they were in comparison to the ruler. 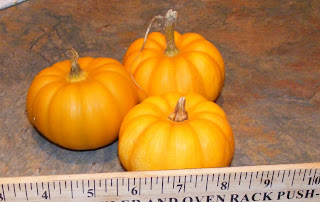 I hollowed them out and made a stuffing of white and wild rice, mushroom, garlic, and the little bit of pumpkin I carved out. I seasoned it with s&p and parsley. 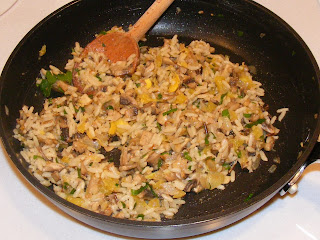 I sprinkled on a little parmesan and baked them until they were soft and the cheese was brown.  I popped the lids on before I took the photo. 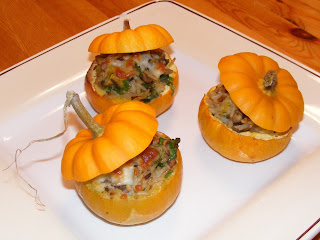 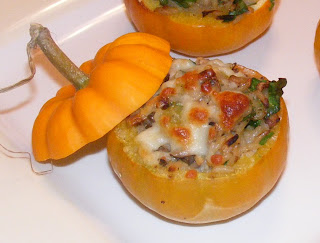 We were in Vancouver in the Spring and ate at a little noodle shop, the name of which I forgot to write down, unfortunately. I had spicy tofu and noodle soup, which had pork and corn and green onions in it and it was so wonderful. I think about it fondly.

I had to come up with my own version because who knows if or when I'll ever get back to that little shop again. This version, my first version, I left out the corn and replaced the noodles with rice. It was really delicious and satisfied my craving perfectly, although I think I'll still try to make one or two more variations.

Heat the oil in a pot over medium high heat. Add the ginger and garlic and cook until fragrant and softening. Add the pork and cook until no longer pink. Stir in the chili garlic sauce and cook for 1 minute.
Add the stock and soy sauce, turn heat to high and bring to the boil. Add the green onions and the tofu. Simmer for 5 minutes.
Ladle the soup into bowls and spoon some rice into each bowl. Sprinkle with more green onion.
Posted by Sara at Monday, January 10, 2011

This was one of my favorite things I ate in Hawaii when we were there in 2007, apart from anything from Maui Taco.

I vowed when we returned from our trip I would find a wonderful pineapple coleslaw recipe....but I guess I sort of forgot about it.  Until we were planning this meal and I knew it had to be added.  Luckily Paula at The Cookbook Junkie had the perfect recipe for Pineapple Coleslaw, from one of the Diners Drive Ins and Dives cookbooks.

My Mom made this and apparently we didn't take any photos, but it looks like...coleslaw, so I guess we'll all be ok. Anyhoo, my Mom said she increased the amount of carrot and decreased the sugar a bit. It was the best slaw I've ever ever had. Fo sho.
Posted by Sara at Sunday, January 09, 2011

I have wanted to try bacon wrapped pineapple for years but it never happened.  In November when I was shopping for food for Pax's birthday dinner I decided to add an appetizer for the adults but couldn't think of anything.  Then I saw a pineapple and thought why not?  We had some at home, all I needed to buy was bacon.
They were delicious and so we added them as an appetizer to Christmas dinner.
Cut your pineapple into cubes, I was aiming for one good size mouthful. Cut your bacon strips in half lengthwise.
Preheat your oven to 400' and line a baking sheet with foil.
Wrap the pineapple in the bacon: 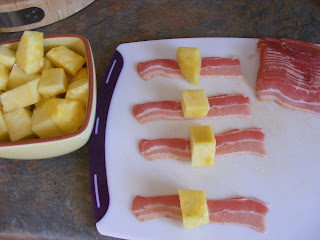 Place on the baking sheet and if you like, sprinkle with a little bit of brown sugar.
Bake until the bacon is crisp, 15-20 minutes. Start keeping an eye on them around 10, so they don't get too crispy. 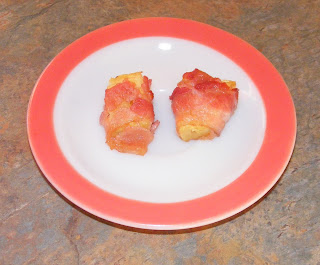 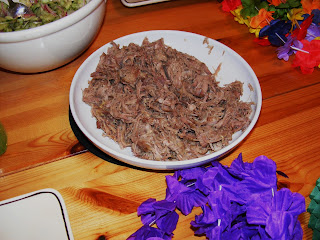 We had to have Kalua Pig as part of our Hawaiian Christmas dinner.  Fortunately I found a recipe that didn't require us to dig a pit in the backyard to cook it.
The recipe came from Ono Kine Grindz. Basically you take a pork butt (also known as shoulder), rub it with salt and liquid smoke, wrap it in banana or ti leaves and cook it in the oven or crock pot.
The dish turned out perfectly. The pork was so tender it fell apart when we looked at it. The only thing I would do differently is season it more aggressively with salt. The recipe calls for salt to taste and I went too light.
If/when I find a pork butt on sale I'm going to cook it the same way but without the leaves (which sadly I am out of now), and serve it with some good homemade bbq sauce, coleslaw, buns and beans.
Hawaiian Christmas Dinner 2010
Posted by Sara at Thursday, January 06, 2011

Happy New Year! I hope 2011 is off to a good start for you. My poor baby has been sort of sick so there's not much sleep happening over here for anyone.
Here's what we're going to be eating the next few days -
Monday (today!) ham leftovers from our New Years Day dinner.
Tuesday Ranch chicken
Wednesday Fish tacos
Thursday Mango Chicken salad
Friday Pasta with peas and ham
Saturday Mexican turkey
Sunday Jamaican beef patties
Monday Thai chicken wings
And the best part of all of this.....my shopping list for the week has 4 items* on it! I've got all the stuff I need in the freezer, pantry and fridge.
Go me!
*Note - this doesn't mean I will leave the grocery store with only 4 items.
Posted by Sara at Monday, January 03, 2011