Book Club - This Is Where I Leave You 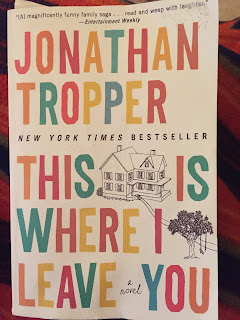 'Once, when I was old enough to ponder these things and young enough to think there might be credible answers, I whispered to Dad during Rosh Hashanah services, "Do you believe in God?"
"Not really," he said.  "No."
"Then why do we come here?"
He sucked thoughtfully on his Tums tablet and put his arm around me, draping me under his musty woolen prayer shawl, and then shrugged.  "I've been wrong before." he said.'
Posted by Sara at Friday, January 29, 2016 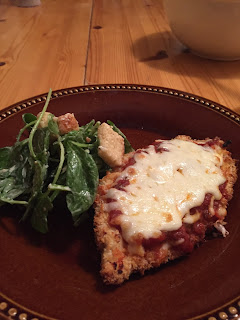 This is my very favorite sort of recipe - a non recipe!

The Mister loves Italian food.  I've become quite "meh" about most pasta, especially pasta with red sauce, which again The Mister loves.
He "casually" mentioned that he'd seen a delicious looking chicken parmesan on TV recently.  Now I am very lucky that The Mister is a very easygoing eater - he'll eat pretty much anything you put in front of him, is always complementary, and very rarely complains about what I cook.  So occasionally I like to cook things he brings up, because he's obviously interested in them.  Occasionally.  Not too often.  Don't want to spoil him or anything.

Anyhoo, the chicken.  So I preheated my oven to 425' and got 3 shallow bowls ready for the breading of the chicken - flour seasoned with salt and pepper in one, 2 beaten eggs in the second, and panko bread crumbs in the third.  I lined a baking sheet with foil, placed a cooling rack on the sheet and sprayed it with non stick spray.  Then I cut up 2 chicken breasts into 3 cutlets each.  Flour, egg and bread the cutlets and lay on the baking rack.  I baked for 15 minutes, flipped, and baked for 5 minutes more.  Then I removed the tray from the oven, spread each chicken piece with a few spoons of pasta sauce and topped with shredded cheese.  Back in the oven for 4 or 5 more minutes, until the cheese is melted.

I was going to sprinkle them with parmesan when they came out of the oven, but forgot. 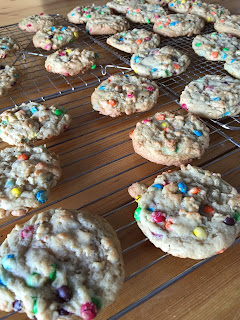 I made these cookies for The Boy's class during December.  They were, I heard, a hit.  The rice krispies add some nice texture and crunch, and you cannot go wrong with M&M's in a cookie.

When I was a kid my mom would occasionally make Smarties Cookies.  I absolutely loved them and they are one of those childhood food memories you never forget.  A couple of years ago I asked my mom for a copy of the recipe - she couldn't find it, but said she was sure it was just a standard chocolate chip recipe that she swapped in smarties for the chips.

My brain remembers them differently, but these are pretty good too.
Maybe one day my kids will be making these for their kids..... 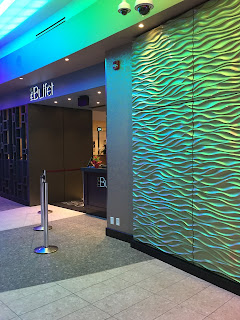 Last month we visited the new casino in town for lunch at The Buffet - their (you guessed it) buffet restaurant.  The Mister loves a salad bar, and you don't see them often any more, so he's been wanting to go since the concept was announced.

It's pretty straightforward - pay at the entrance, grab your cutlery, find a table, and get to eating.

After grabbing a red plastic Coke cup of beverage (ice tea and water for me, ginger ale for The Mister), we headed to the soup and salad station.  We tried both soups - Italian Wedding and Minestrone.  The Wedding was pretty standard.  The Minestrone was good - the fresh beans and zucchini had nice firmness to them.

The salad bar station was not too bad - 2 lettuce choices, 3 dressings, plus cheese, bacon, veg, croutons and seeds.  The only quibble I had was there was only one set of tongs out for both cheeses and the bacon, meaning the cheeses had bacon in them, and the bacon had cheeses in it.  Not the end of the world, but I'm sure they could have found a couple of extra sets of tongs in the back.

But, mostly tasty.  The pasta was super bland, and the chicken, while looking appetizing, hardly had any flavor.  But the rest were all good to quite good.

Desserts were bad.  3 choices, and all very obviously prepackaged from a supplier.

The staff were all lovely, and the price was not bad - $12 for lunch.

The Buffet is open for weekend brunch, lunch Monday - Friday, and dinner nightly.
Supposedly they have "theme" buffets as well, but I can't see any info on the website.

The pretty frost with the rude name

I am  not a fan of winter, but there is something so pretty about lots of frost on a sunny day when you're inside and don't have to go out. 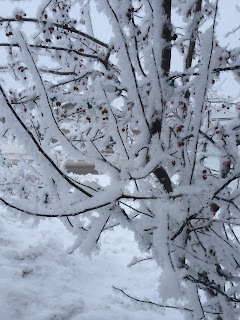 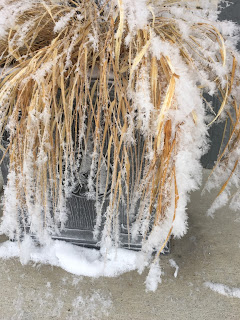 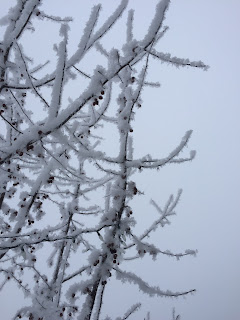 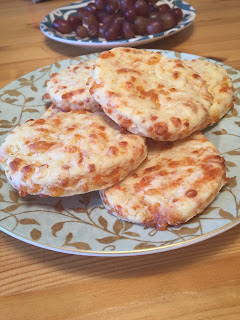 You guys.  Seriously.  Finally, after all these years, I baked something that my family not
only ate all of without me bitching at them, but actually fought over.

I've given up trying to figure out what they will and won't eat when I bake.
It's a crapshoot.  I make oatmeal cookies and they tell me they're amazing, so I
make them again a few months later and no one eats them.
So annoying.

I sort of figured these would be a hit as The Mister loves cheese, but I was unprepared
for how quickly they ate them, and how passionate they were about them.
So weird.

Check out this recipe for Australian Busters - an easy and delicious cheese biscuit.
Posted by Sara at Monday, January 11, 2016

Book Club - I Remember Nothing 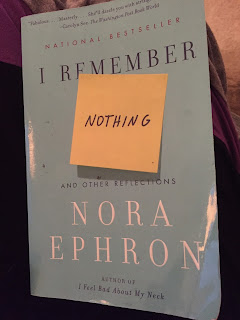 "There was a diet cola ad that was so in love with itself that it actually recommended going to a special web site that explained how the ad had been made."


"I resent that asking for salt makes me seem aggressive towards the chef, when in fact it's the other way around." 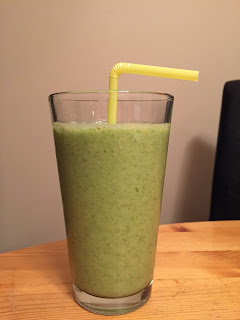 How things went in December:

Yoga every day -  Success.  I've taken classes 2-3 times a week, and done something at home every other day - some days just a savasana, or deep breathing, some days 10-15 minutes of poses, some days, although not enough - an hour or more.  I also learned the Wild Thing pose.  That made me feel so confidant.  Currently working on Crow Pose.  Not going as well.

Drink more water -  Meh.  Not as great as I wanted.

Drink more smoothies -  Ha.  A complete failure.  I think I had 2 the whole month.

Read every day - Definitely better.  It can be hard to read with small children around, so I do my best.

Be grateful -  Not enough.

What I'm hoping to work on this month:

Dust off my fit bit  - somewhere I've got a basic one that counts steps and syncs with my computer to track it for me.  I've been meaning all year to look for it.

Keep calm - I'm heading back to work this month.  :(
This is going to be upsetting and sad and stressful and tiring.
Here's hoping I don't completely fall apart.
Posted by Sara at Friday, January 01, 2016