I don't like coffee. I don't know if I've mentioned that before, but it's true.
I don't drink hot coffee in any form and never have.
For a while I would have the very rare frappuccino from Starbucks, but not often - they are so rich - and a Ice Cap from Tim Horton's occasionally.

During my last pregnancy we had to drive to Vancouver for some hospital appointments and my treat for having to sit in a car for hours, go get poked and prodded and then drive hours back home was a sausage and cheese mcmuffin from McDonald's and a small ice cap from Tim Hortons. Memories!

While I was on maternity leave I indulged in Ice Caps a little more often, then stopped after the caffeine started making me queasy, but then started up again.
And so here I am, with a kinda sorta Ice Cap habit that I am trying to break for both the sake of my wallet AND my chubby little bod.
Speaking of my bod, a medium ice cap has 360 calories, 15 grams of fat and 47 grams of sugar. Eeeeeeeeeek.
So I've been experimenting with making my own coffee shake at work in the mornings.

I have my Magic Bullet from Christmas 2008 (!!!) base at work  so in the mornings I fill my cup with the ingredients except the ice, which goes into a plastic bag, and then at work I whizz it up.

It is definitely less decadent than a store bought drink, but it still feels like a treat. 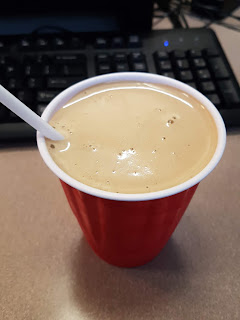 I threw the ingredients into a calorie calculator and here's what it said to me -
192 calories, 6 grams of fat and 24 grams sugar.

Not bad, and definitely better than the drive thru options.
Posted by Sara at Monday, July 30, 2018

Book Club - The Death of Mrs. Westaway by Ruth Ware 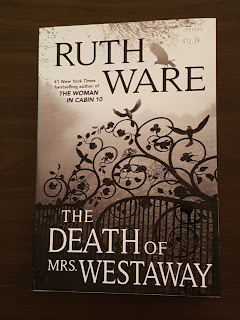 I borrowed this from My Boo to fill the Mystery or Suspense Novel category in this Summers Reading Challenge.  It was good, a bit suspenseful, and a nice change of pace from all the self help and biographies I have waiting for me.
Posted by Sara at Thursday, July 26, 2018

I found this recipe at Frugal Girl, and it was a hit with The Mister and me. Not the kids.
Nothing is a hit with the kids.
Ever.
I am defeated.

But! If you like orzo, and if you like sausage, you should try this dish.
It's quick and delicious you could swap in and out whatever veggies you please.
I used green beans because I had 'em, but pretty much any veg would be super in this.
Meatless would be grand too.
I am a big orzo fan and we don't eat it enough. Gotta change that. 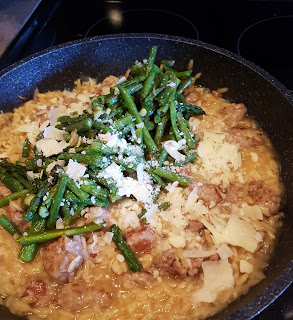 Recipe: Orzo with sausage and asparagus
Posted by Sara at Sunday, July 22, 2018

I'm late on this one, July is more than half gone (whaaaaaat) but here is the list for Summer 2018 from the TNRD Library.  Go here for all their details on the challenge.

Same as the past 2 years, I am not giving myself a time frame to get these done, but maybe hopefully all in 2018? 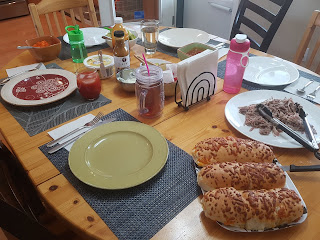 I bought a two pack of port butts at Costco so I could make some pulled pork this summer.  I immediately thought of the Kalua Pig we made years ago, but surprisingly I no longer have Hawaiian salt in the cupboard or banana leaves in the freezer.  Instead I used this spectacular recipe for crock pot Kalua Pig from Nom Nom Paleo.  Truly delicious.

I have used both butts up now with that recipe, one for a Sunday Dinner and one when we had some family in town to visit.  I don't recall if we added the optional garlic cloves the first time, but we did the second time.  Can't say for sure if it added anything extra, but garlic never hurts.

Everything about this recipe is super.  Give it a try this summer.
Posted by Sara at Thursday, July 19, 2018

Nearly 4 years after the last Smackdown, and now I've posted 2 within a couple of months!
Whaaaaat???
Here we come with - Banana Bread.

Banana bread and smoothies are the only way I will eat bananas - it took me years and years to enjoy them those ways.  Out of the peel?  I won't eat 'em.  Bleh.
Banana bread is something that once I did start to eat I was still "meh" about, until I discovered the banana bread in Cookin with Coolio which is really the best banana bread ever.

Coolio has previously battled on Smackdown - and won - a chicken battle.  Today he is up against another of my faves - Chrissy Teigan and her Banana Bundt Bread.

First up - Coolio.  The first thing I have to tell you is the my copy of his book is falling apart at the recipe for this bread because I have made it so many times.
His bread is made in a standard loaf pan, and is ready in an hour (plus cooling time).  It's a pretty basic one - sugar, honey, butter, eggs, banana, flour.   Classic. 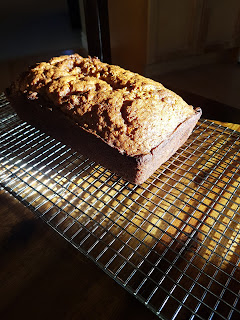 In the other corner is Chrissy Teigen's banana bundt bread.  This story was all over twitter for a while when Chrissy was testing the recipe for her next book and was looking for someone who had ripened bananas they would give to her.  The story was funny and the recipe piqued my interest - coconut and chocolate in banana bread???
This one veers away from being traditional (for me); beside the coconut and chocolate there is also vanilla pudding mix, which is something I am pretty sure I've never baked with before.  This also fills up a big bundt pan - this is a huge cake. 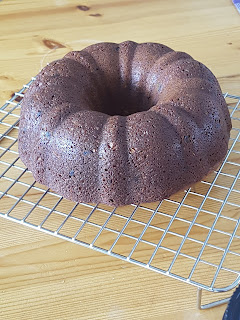 The Verdict -Coolio wins it with his classic loaf.  Chrissy's is also delicious (dark chocolate FTW) but there is just so much going on - if you want a basic 'nana bread, Coolio is the one.  Feeling fancy?  Go with CT. 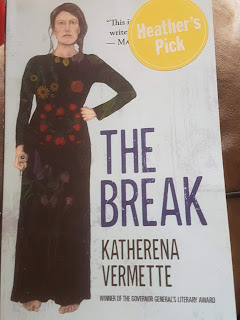 "But her fifties feel exactly like her forties - everything just hurts more."

"She would always hold my hand so hard, like she wanted me to know she'd never let go, so hard I could feel the bones in them.  I think she holds hands like that so we would know how much she loves us."

"Tommy wishes he could look at her with the same kind of pity but he knows better.  She would catch him and then go off.  She always catches his looks, so he only thinks them now."

Bought this with a gift card and it filled 2 requirements I'd like to read more of.  More Female authors and more Canadian authors.

This was another easy to make ahead meal that I found in my newly organized binder of recipes.  I written many times before about all my notebooks and binders and at times boxes full of recipes I'd copied out of books, torn from magazines, been given by different people....When I was working on organizing my newly moved office area I sat down and went through the papers yet again, pulling out what I knew I would never use and trying to organize the keepers before sticking them all in a binder.  They all fit in one binder!  Now this does bring me a bit of satisfaction, but I also have a huge amount of recipes bookmarked on my computer and saved in Pinterest.  I guess I need to sort those out too.

Anywhoo - this Beefaroni is a homemade version of that beefy cheesy classic.  A bit more time consuming as it contains 2 sauces you make separately and then mix together, but it was so delicious so it was worth it.  This might not be the most appealing recipe in Summer, but save it - you'll want this in the cooler months.  Or soon, if Summer keeps rolling this way... 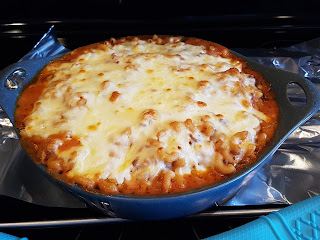 Happy Canada Day Y'all!
I hope you are having safe fun out there.
Enjoy our beautiful country and be nice to everyone.

My God I cannot believe it's July.  Where is this year going?
I feel like I have been totally off the rails for the last long while - a year or more?  Life seems ok on the surface but I am struggling with everything.  I need to get back on track.  I WANT to get back on track.  But I don't know how.  Maybe starting back with intentions and the journal will help?

Move, every day.
I haven't been doing too badly with this the last little while.  I joined the Global Challenge with my work mates and it started at the end of May.  We all got step counters, which was good as my not very old Fit Bit bit it back yonder and I was mad at how NOT long it lasted so I didn't replace it.  I find the challenge very motivating and I look forward to entering my activities every morning.  So far it hasn't led to any sort of weight loss but that might also be because I need to -


Get back on the yoga train.
I took a very long hiatus from yoga due to issues and I started back a few months ago.  While I am thrilled to be back to taking classes, I have not gained back enough strength and confidence nor lost any pounds to get me back to the (slightly) harder classes that I used to take and loved.  I want to get back to there.