I had breaded and fried ravioli once, years ago, as an appetizer at the Olive Garden. We enjoyed it, but I never really thought it was something you would make at home. Then a year ago Jenny posted a recipe for Giada DeLaurentiis' fried ravioli. They looked so good and I saved her post.

A while later we were at the Italian deli downtown and they had some gorgeous fresh raviolis in the display case. The fillings sounded so good, and they were so cute that I had to buy some. Scott asked if they were for dinner. Yes, I said, but not boiled. We are going to bread them like they do at the Olive Garden! 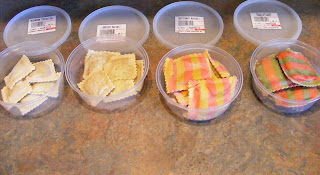 I'd long forgotten the ingredients called for in Giada's recipe so I didn't have buttermilk on hand and I wasn't in the mood to deep fry. So instead we dipped them in beaten egg and dredged them in bread crumbs mixed with a little cheese and some salt and pepper. Then we pan fried them. 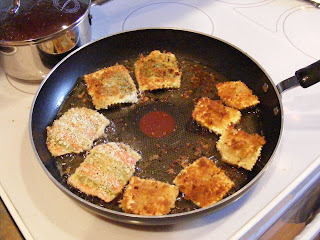 I really enjoyed these. We warmed up some marinara sauce for dipping and it of course went very well with the crispy pasta. My favorite was the butternut squash ravioli, so creamy and soft in the middle with a crisp crust. 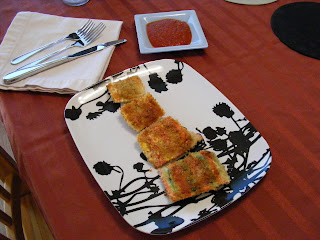 I'm sending this easy and delicious dish off to Ruth for her weekly Presto Pasta Nights roundup. Who knows what noodle-y deliciousness will be sent to her this week!
Posted by Sara at Wednesday, March 04, 2009

I love this idea and I'm amazed I've never seen of it or heard of it before. Thanks for sharing it :)

Thank you both! It is quite simple, other than the mess I always make when I egg dip and bread things. I just can't keep it clean.

Sara those are really something! They look marvelous and I like the 2 containers on the end in the 1st picture - love the pink stripes, I've never seen ravioli like that before!

I will have to try these, looks nice and simple yet tasty.

What a perfect dish to share for Presto Pasta Nights second birthday bash! Thanks for sharing. I definitely have to try some.

Ooh! I have never had fried ravioli before, sounds awesome!
I love the stripey ones.

I love your alternative idea !!

Oh I'd forgotten how much I liked these - I should make them soon!

Uh, why don't you eat from the Italian Deli EVERYNIGHT? I could completely give up cooking if that's what I could get.

I am loving this idea:D

I recently came accross your blog and have been reading along. I thought I would leave my first comment. I don't know what to say except that I have enjoyed reading. Nice blog. I will keep visiting this blog very often.