It's Hip To Be Square - Cheesecake Pops

This month's Daring Baker challenge was all about being creative and turning a cheesecake into adorable and fun cheesecake pops.

This is only the second baked cheesecake I've ever made, and the first time I've ever cooked anything in a water bath. The original recipe from Sticky, Chewy, Messy, Gooey by Jill O'Conner as provided to us by Deborah (Taste and Tell) and Elle (Feeding My Enthusiasmn) made 30 to 40 pops. That's too many for us so I cut the recipe in half and baked the cheesecake in an 8X8X2 glass dish. It turned out well, although I think I could have taken it out a couple of minutes early. 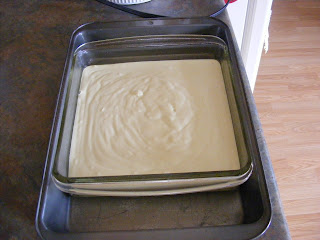 The cheesecake was cooled to room temperature and then chilled overnight.

The next morning I was ready to shape the pops, add the lollypop sticks and then chill again before dipping in chocolatey goodness. 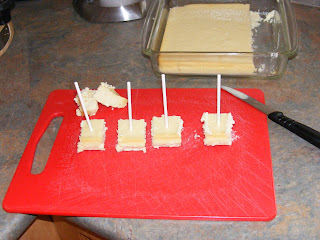 I liked the square shape better than balls - they were easier to make and I just thought they looked nicer. 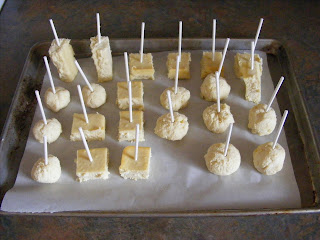 We got 23 pops out of the batch; balls, squares and even a couple of rectangles. 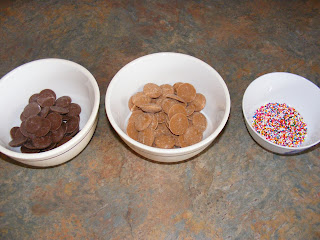 When we were at Michaels picking up the lollypop sticks Scott found the candy melts. He picked up a bag of chocolate and a bag of peanut butter flavored. Mmmmmm, peanut butter cheesecake lollys! 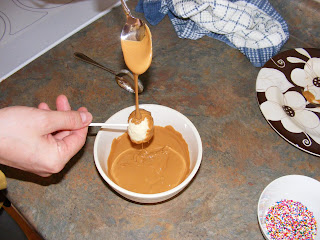 We also used sprinkles and got as creative as we could. 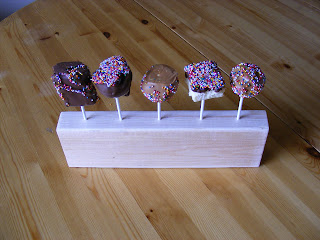 While the pops were chilling before decorating, Scott thought up this little cheesecake pop holder. Hee! 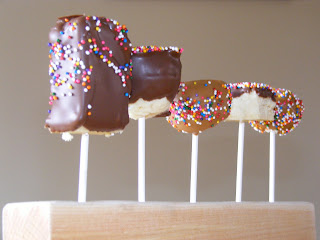 These were pretty tasty, although the coating was a little heavy on some of them, and I could have done without the sprinkles. But the cheesecake itself was fabulous, and the pops were so cute and easy to make. 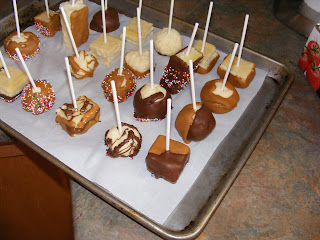 Thanks Deborah and Elle!

1 pound chocolate, finely chopped – you can use all one kind or half and half of dark, milk, or white (Alternately, you can use 1 pound of flavored coatings, also known as summer coating, confectionary coating or wafer chocolate – candy supply stores carry colors, as well as the three kinds of chocolate.)

(Note: White chocolate is harder to use this way, but not impossible)

Position oven rack in the middle of the oven and preheat to 325 degrees F. Set some water to boil.

In a large bowl, beat together the cream cheese, sugar, flour, and salt until smooth. If using a mixer, mix on low speed. Add the whole eggs and the egg yolks, one at a time, beating well (but still at low speed) after each addition. Beat in the vanilla and cream.

Grease a 10-inch cake pan (not a springform pan), and pour the batter into the cake pan. Place the pan in a larger roasting pan. Fill the roasting pan with the boiling water until it reaches halfway up the sides of the cake pan. Bake until the cheesecake is firm and slightly golden on top, 35 to 45 minutes.

Remove the cheesecake from the water bath and cool to room temperature. Cover the cheesecake with plastic wrap and refrigerate until very cold, at least 3 hours or up to overnight.

When the cheesecake is cold and very firm, scoop the cheesecake into 2-ounce balls and place on a parchment paper-lined baking sheet. Carefully insert a lollipop stick into each cheesecake ball. Freeze the cheesecake pops, uncovered, until very hard, at least 1 – 2 hours.

Alternately, you can microwave the same amount of chocolate coating pieces on high at 30 second intervals, stirring until smooth.

Such a fun challenge. Love the shape cutouts! I'll have to try some of those next time.
The sprinkles do look pretty but they taste great even without don't they.

fabulous looking pops sara. and i'm very impressed with your nice neat squares - mine were a bit more rustic!

I'm with you on the squares - so much easier to do, and just as effective. Love that cheesecake pop holder!

I love the squares - I wish I would have tried different shapes. And the cheesecake pop holder is wonderful! Great job!

I had definitely thought of the square shapes and thought they would be wonderful - you proved it! Great job. Mmmm - peanut butter!

Very creative. You did such an excellent job with this months challenge. I like the square ones as well:D

Peanut butter melts are a great idea. So many excellent variations out there.

wow..peanut butter? What an awesome idea

This challenge looked like so much fun but I just didn't have a way or reason to do it. So cute! I like the square ones, too. If I had done it, pb would have been on the top of my list. I also thought about a s'more version.

I can see how having the smaller batch made it easier to get shapes. Have to remember that!
Your pops look so cute, all lined up in a row.

I agree.. I'm lovin everyone's cheesecake cubes - they are so cute and appetizing looking! I love how you decorated and that Scott.. he's a pretty resourceful guy! Excellent pop holder! teee!

Your pops look great! And I love that holder :) Excellent job on the challenge.

I love the shapes of your pops and peanut butter is delicious!

love that you did different shapes, they look great! and peanut butter flavored ... wow, yumm!

Awesome job! I love the square shapes (and gosh, they would be so much easier!). They all look great!

Scott's the man! Great take on the challenge Sara! They all turned out wonderful and good looking!

They all look ecellent but I pick the peanut butter and chocolate one!

I am crazy jealous about the pop holder. Just so you know.

How cool are all your different shapes! Love them!

your square ones are hip alright. perfect!

Nice looking pops. I like the different shapes and colours!

You did a wonderful job on the pops!

I used an empty egg carton for my holder. Your pops look great!

I love the squares. They remind me of the Sees Chocolate pops that I used to have as a child, yum!

Your pops look great. YUM on the peanutbutter coating. Those must taste divine!

I love the collaborative effort between you and Scott on this one. Great job!