I thought this month's Bread Baking Babes recipe was especially exciting: the recipe we were baking came from the brain of our very own Mary. She asked us to try her recipe for Dark Onion Rye bread that she's developed. How cool is that! 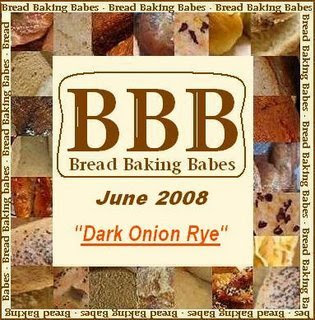 We had to bring our starters out of hibernation. I was always worried that my starter Craterface wasn't quite up to snuff, by finally he looked like a starter should. 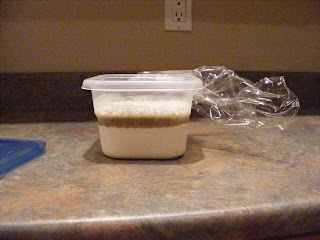 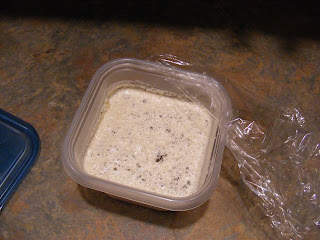 The starter was fed, and then part of it was mixed with flour (both white and rye) and water and left to ferment overnight. 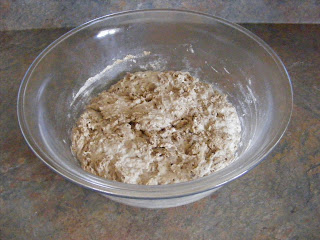 The next morning the sponge (above) was mixed with the rest of the ingredients. Man, did that dough smell amazing! And was left to rise. Here it is before the rising, 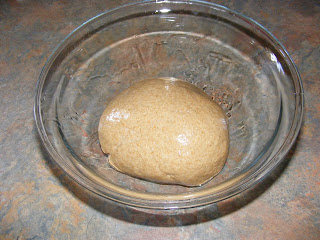 and here it is after. I left the dough to rise for about 6 hours, and it didn't rise much at all. 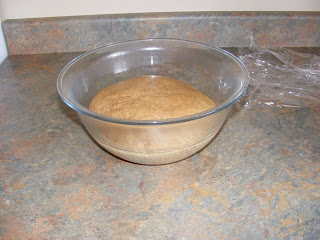 After a couple more hours for the second rise, which didn't do much either, I baked the bread. 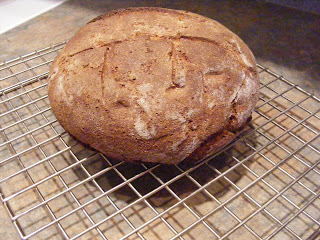 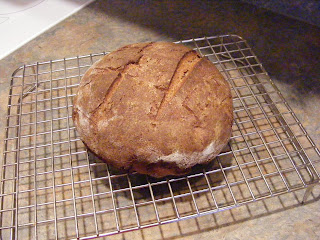 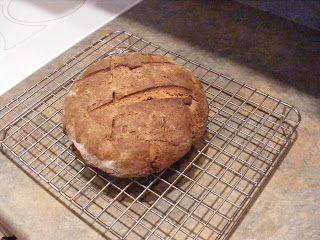 It wasn't super fantastic, but it wasn't awful either. The bread lost most of the onion smell that the raw dough had, which was kind of disappointing. I didn't taste any onion either, but the rye flour and the sourness of Craterface was quite strong. I could probably count on one hand the number of times I've eaten rye bread, so to others (like Scott) the taste was more pleasant than strong.
If you've read all the other BBB posts (they are listed in the right hand column) you'll see a lot of talk from people wayyyyyy more experienced than me with bread discussing all sorts of possibilities for why some of us had more success with the bread than others. I am nowhere near as bread-savvy as them, but I have two ideas why mine didn't rise as much as it could have. One is that I didn't spend enough time with my starter after taking it out of the fridge. Craterface is my first starter, and I think I misunderstood the feeding instructions, and I don't think he was as strong as he should have been. Good lord, I just called my starter a he. Second is I think I added too much flour. My dough was really really stiff. I am still working on getting over my very bad baking habit of adding all the flour to the dough. Sometimes you just don't need all that flour. I was hoping to try to make it again before our posting date, but man, the days just go by so fast lately. I'd like to try this again with the new modifications Mary has made to the recipe - please go here for Mary's recipe.
Thanks to Mary and the BBB's for another great month!
Posted by Sara at Monday, June 23, 2008

I got such a kick out of learning Craterface's gender. Well, I wouldn't want any woman referred to as a Craterface--so it makes sense! :):) I love rye and yours looks wonderful. In Illinois, where they have many great Eastern European bakeries, a lot of the rye bread looks just like yours. It's delicious stuff and I miss it.

HE! I'm with Sher, the name fits the gender! Adding too much flour is really easy but you're getting it. Bread is so much about learning feel. Rye is a very different flour no matter what kind it is.
I love the slash on your loaf, lovely!!

And Sara I had the same experience with the powdered onion: it was lovely in the dough and gone in the bread. I had much better luck with the fresh sweated onions.

I think any starter should be a he by nature...smelly, obnoxious if left on his own, bubbly when stirred gently, getting mellow when fed properly.

Yes, definitely fresh sweated onions in this one! Adding too much flour is a bread baker's "sin" believe me I know!. It takes time and some daring to withstand that. You're getting there!

my starter is a he-the Dude. And he is such a joy to knead with he he.
Your bread looks great, just perfect!

I love the name of your starter. I was hoping to have a pet starter by this time, too, but maybe next month...Your marathon rise session with this brings back fond memories of my session with Julia Child's French bread. OMG. It was agonizing!

Sher - yep, with a name like Craterface it HAS to be a boy!
Thanks for all your nice comments on my bread, I appreciate it.

baking soda - I will try the sweated onions next time for sure.

Love all those pictures of the dough in so many stages. Bread looks beautiful like a giant puff ball!

I think your bread looks wonderful!

Looks great. I love how the slashes look :)