Back Bacon on a Bun

This is one of Scotts favorite sandwiches and I love it too not only for the taste but also because it's ridiculously easy.
We first had this sandwich at the farmers market in Calgary at Millarville, and it became one of our Saturday morning rituals during market season.

Our Kamloops summer Saturday morning rituals include a latte for Scott from Cowboy Coffee and bannock from the market downtown. But a couple of times since we have moved we've treated ourselves and reminisced about Millarville with a back bacon on a bun. 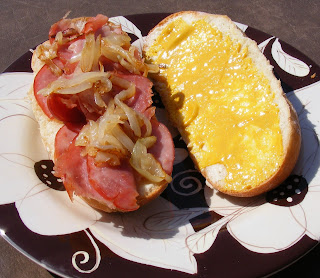 Get yourself some nice buns - I prefer soft rather than crispy for this. Gently fry up some sliced onion until nice and soft and brown. Slice some back bacon (aka Canadian bacon as it is known outside of Canada) into slices (not thin but not really thick) and fry them in just a touch of oil until they are hot and browning in spots. Then slather your buns (hee!) with mustard and pile with fried onions and back bacon. Then devour and consider having another.
Posted by Sara at Saturday, August 22, 2009

That sandwich looks so good--simple and tasty, and bacon--it doesn't get any better!

This is really something ! I have to surprise Andrea with it !!

Natalia - he will love it!

Think I know what I'm making for lunch today.