Back in June I posted a Wordless recipe for toast with peanut butter and bacon. An anonymous reader left a comment on that post with instructions on how to make peanut butter bacon spread. When Scott read that, there was no stopping him. 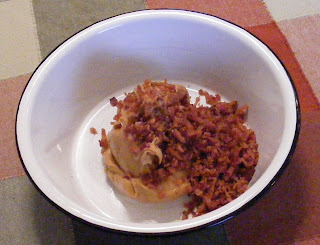 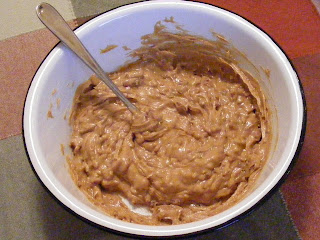 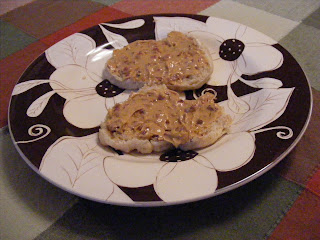 We saw Jamie Oliver make this relish on his new(ish) show Jamie at Home - Jalapeno Avocado relish. At least, that's what I call ours. His is called something else similar, but the book is alllllll the way in the other room right now. 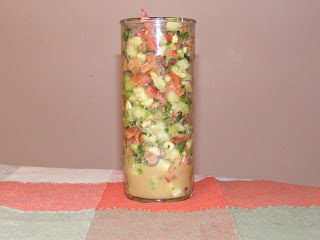 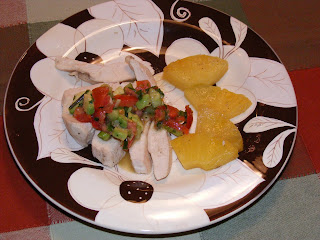 Here's a del.icio.us recipe for you from La Mia Cucina. I bookmarked this recipe in January 2007. Lisa made this for Weekend Cookbook Challenge, and even though I'd saved it, I was never sure I'd make it. Until I was faced with 3/4's of a large head of purple cabbage leftover from a salad recipe. I still had coleslaw in the fridge from the pork sandwiches, so we tried Lisa's stew 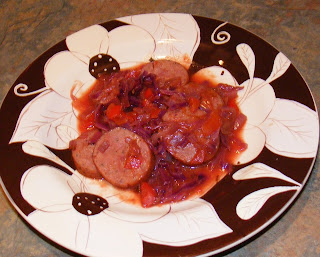 Back in the summer Scott's sister, brother in law and our nephew came to visit. That kid survived on a diet of ribs, skinny cow fudge pops, peas, and goldfish crackers the whole weekend. (The adults ate pretty much the same thing, with a few cocktails in the evenings.) One day I sat with my nephew as he ate his snack, and he was kind enough to share a couple of his goldfish crackers with me. They were good! A month later on holiday, a bowl of goldfish crackers turned up at the bar we were having a pre-dinner drink at, and when we went home, I added them to my grocery list. The bag sat untouched for a couple of months until I was trying to figure out what to do with some chicken for dinner. Cheddar Chicken Fingers were born. 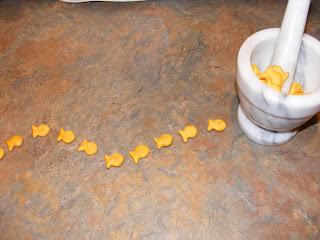 The little crackers were so happy to go swimming in my mortar. Or pestle. 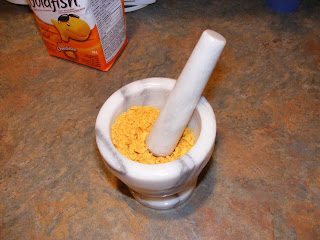 A massacre! Avert your eyes! 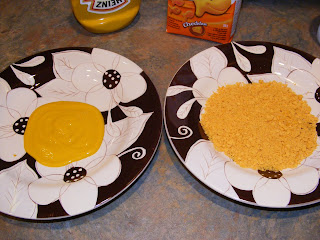 I lightly spread the chicken strips with mustard, and breaded them with the ground up flesh of hundred of small cheesy goldfish. 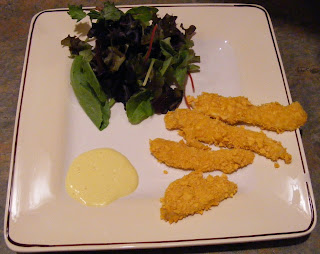 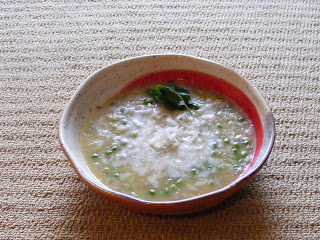 You are such a recipe machine!! How long were you cooking these? It would take me a month and a good brain to remember to take all of the pictures to do ampost like this!

some of these are from the fall, and older! this is why i do these "bite" posts - to get rid of, i mean, share all this stuff.

That relish looks good, too. Would it work alone with tortilla chips?

I saw that goldfish recipe yesterday. I really want to try it.

TavoLini - i love the goldfish chicken, it's my new favorite way to bake chicken. I think the relish would be good with chips too. I also added it to salads, which was a nice change.

How come I'm stuffed but see the bacon and peanut butter spread and I want some RIGHT NOW... Now you see why I was hiding from myself...

It all looks so good!! I'm really drawn towards the little fishes, though - what a great idea!!

Great post and I particularly love the photo of the feeeesssse as my grandson calls them making their way to the mortar and pestle.