At the beginning of the month I received an email kindly asking me to take part in a new food event in the blogosphere, No Croutons Required, created and hosted by Lisa's Kitchen and Tinned Tomatos.

The theme for February is simply Vegetarian Soups.

I thought and thought about what to make. Should I make one of my standby veggie soups, or maybe put the vegetarian spin on a non-veggie soup in my repertoire? None of the above, as I decided it was the perfect time to pull out an as-yet-unused cookbook that my lovely Mary sent me after Scott and I moved to Kamloops last year. That sneaky girl tricked me into telling her which cookbook I was currently lusting after, and then sent me a copy of it - Super Natural Cooking by Heidi Swanson. It's become one of my most read cookbooks, and I visit Heidi's website, 101 Cookbooks, weekly. If you haven't checked it out (there might be 3 or 4 of you out there who haven't), you should. It's lovely.

I had marked her Roasted Vegetable Soup to try the first time I opened the book. Tomatos, red peppers, onions (I used red) and garlic are drizzled with olive oil and sprinkled with salt and then roasted in the oven until everything is tender and beginning to brown. Then the veggies are whizzed to a puree with vegetable broth and smoked paprika, and you are ready to eat. 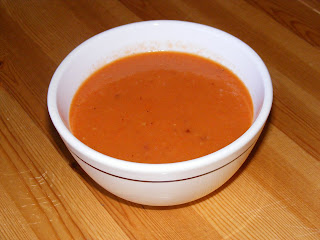 What a great soup, and roasting winter tomatos pulls out the teeny bit of flavor they have. The smoked paprika is brilliant and really makes the soup what it is. I only had two problems - one, my garlic cloves were a little on the small side, and because I wasn't watching them closely, most of them burned and I wasn't able to use them in the soup. I can only imagine how much better the soup would have been with that extra roasted garlic. And my second problem - we ate the whole batch of soup in two days. What a delicious problem to have!
Posted by Sara at Thursday, February 14, 2008

I could use a bowl of this soup right now! Lovely entry. Thanks so much for participating in our event.

This soup must be delicious!

MMM, I love roasted veggie soup. So hearty, tasty and good for you.

Wow, that looks/sounds delicious. I think I must try it!

I'm so glad you are enjoying using the cookbook. Because of you, I went ahead and got this book too. I love it!!

The soup looks awesome. Definitely a must for this bone chilling dampness we're having here in Nova Scotia. Thanks for sharing and ...I think I'll head out now and buy the book.

Oh you are so right on with this one Sara. This is super good veggie soup!