I was going to do a post on the dinner that I made for New Years Eve, but then, meh. Do you need to see pictures of (extremely delicious) steaks that we did nothing to, other than salt and pepper? Or (really yummy) carrots that I have no recipe for? Especially at the beginning of February? No, I didn't think so either. But, I do want to share the recipe for the potatos that we had. Oh my, were they good.

Since the original recipe was for 8 servings I halved it. Scott is a big eater and we both like potatos, so I knew there wouldn't be any leftovers. I was wrong. Cut in half, this recipe still made a ton. Look at this: 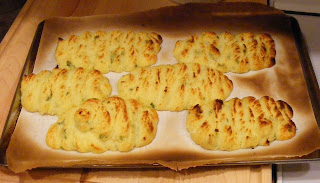 I made these in the afternoon and left them to chill until we were ready to eat. Very easy and very good.

Bring a large pot of water to the boil and cook the potatos until very tender. Drain, return to the pot and add the butter and sour cream. Mash until smooth. Add the egg yolk and stir to combine. Add the chives and season with salt and pepper. Spoon the potatos into a pastry bag or zip bag (that's what I used, just fill it, squeeze out the air, cut off one of the corners and go to town) and pipe into 8 servings on a parchment lined sheet. Refrigerate until ready to cook.
Preheat oven to 400' and cook the potatos for 2-25 minutes, or until hot and starting to brown. If you so desire, pop the tray under the broiler for a few minutes to brown. Carefully remove to plates and serve right away.

I am still madly in love with my juicer and my new hobby is going to the discount table at the local grocery shop and buying big bags of apples and oranges for 99 cents, and then making delicious juices, as seen below: 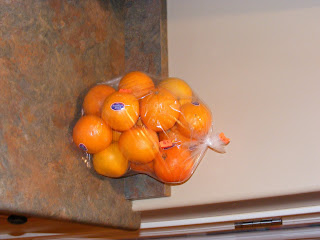 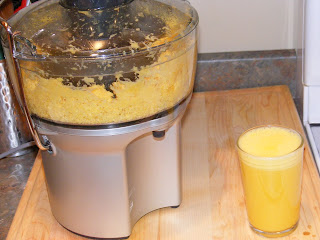 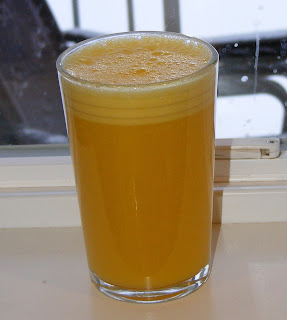 I've shared the recipe for my favorite potato pancakes before, but I forgot, and last time I made them I took this picture that I thought came out rather well. 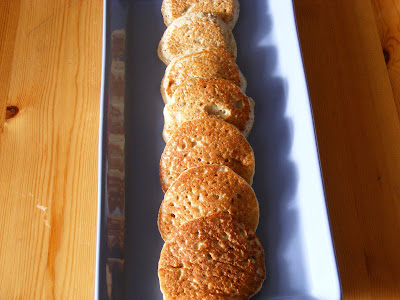 I found an article on the internet a couple of weeks ago written by Peter Kelly on his appearance on Iron Chef America, and beating Bobby Flay. I found it quite fascinating. Read it here.

Speaking of Iron Chefs, looks like Rob Feenie is recovering from losing his restaurants last year (well, as much as you could, I suppose); he's going to work for Cactus Club Cafe.

Happy Wednesday everyone!
Posted by Sara at Wednesday, February 06, 2008

It occurs to me Sara that these would freeze rather well thereby facilitating something I'm always failing at. That would be portion control.
Of course all you have to say is potato to win me over.

We just made duchess potatoes at school!

ooh those duchess potatoes are something the SO would love!!! He's a meat and potatoes guy, and I'm sure he'd love this twist.

i just joined the DB this month, just checking out everyone else’s blogs, wanted to say hello :)

Oh my God those potatoes look awesome!! An no I am not following lent. Not even the Orthodox one:)

Beautemous potato cakes!! YUM! You're so lucky you get to make fresh juices whenever you want. I've been toying with the idea of getting W one for Xmas the past few years because he loves juice.. I take it, it's worth the investment, yes? :)

YUMMMMMM! Those potatoes looks soooo good. I will try these for sure.
The juice and the potato pancakes looks great too!

Wow, those potatoes look so good. I have never made anything like them - now I will have to!

Nice to see you are using your juicer. We have one, but it is so hard to clean we never use it. That should be my late NY's resolution - make juice!

Your juices look and sound amazing, too...

Nice to find your blog! The potatoes look really good. I also really enjoyed the article about Peter Kelly on the Iron Chef. I'm always curious about the behind-the-scenes of that show.