We bought pumpkins for Halloween, but never got around to carving them. They sat on the floor of my parents hallway until November 2, then sat on our kitchen counter after that. They've been mocking me, dammit, like in this picture.

Enough was enough and it was time to either use them or toss them. Because in the past year I have discovered that there is more to pumpkin than just pumpkin pie (Scott doesn't think that is possible), I decided to cook and freeze the pumpkin flesh to use for baking and stuff.

How to bake a pumpkin.

Cut the pumpkin up into large but manageable pieces. Scrap out the seeds. Preheat your oven to 375' and bake the pumpkin until very soft, from 45 minutes to 90 minutes, depending on size. 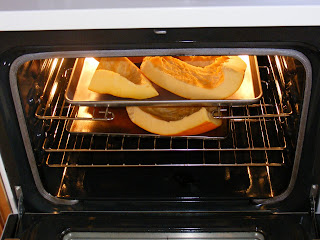 Remove the pumpkin from the oven and let cool.


When the pumpkin is cool enough to handle, scrape the flesh from the rind. Let sit until completely cooled.

Mash the pumpkin flesh or puree it in your processor. Refrigerate or freeze until ready to use. 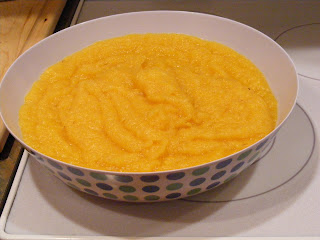 I had a lot of pumpkin. The bowl above, which is a pretty huge bowl, is holding about 8 cups of puree. That was about 2/3rds of the first pumpkin. Argh.

I froze the puree measured out in 1 cup portions. And I will not tell you how much puree is in my freezer, it's just too scary.

Even without details, I'm getting the scary picture of lots of pumpkin in that freezer!
One of the things I saw with the potato bread was some pumpkin french toast - that what I want to try!
I don't think you should be too afraid of the pumpkin as long as you didn't put any yeast in it.

Yes. It is a lot of pumpkin. You are cheeky - no yeast near the pumpkin - yet.

Hi Sara, so, we're waiting for the recipes now with all that pumpkin puree! I bake mine in the microwave, but I bet baking in the oven must be a great thing to do too. I also have some pumpkin in the freezer...