My boss just celebrated his birthday. On his past birthdays I would bake him a cake. The first year, a white cake. The next two years, my world famous carrot cake with cream cheese icing. Then he mentioned in passing, months before his birthday, that his favorite cake in the whole world is angel food cake with cream cheese icing. So I remembered, and made that for him the next two years.

In the past year my boss has really changed his eating habits. He won't go near anything fried, fatty, sweet, chocolate, etc. A former work collegue stopped by our office a couple of weeks ago and dropped off a cake. He wouldn't go near it and complained about it even being there. So I naturally assumed that he would not want a cake this year. I mean, you'd think the same, right?

When he came into the office this morning I was on the phone. I could not figure out why he was pacing the halls, going into everyone's office and the fax room/kitchen over and over again. When I got off the phone he stomped into my office and demanded to know where his cake was! When I tried to explain why there was no cake, well. Have you ever heard the sound a wounded Rhino makes? Add in some hair pulling and arm waving and you've got the picture. My day. ALL DAY.

So in order to preserve my sanity, I made a stop at the grocery store on the way home. 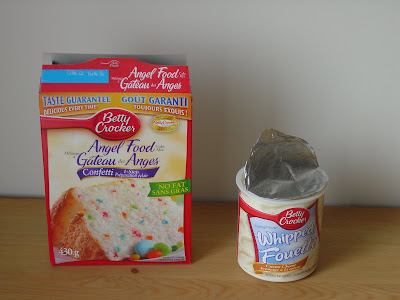 Nope, not even going to make him the real cream cheese icing. And if he doesn't eat this cake tomorrow, so help me...he will wear it.
Posted by Sara at Wednesday, April 11, 2007

Oh, my, I hope he doesn't read your blog!
You are funny.

NO WAY!!! I can't believe he had the the brass-you-know-whats to behave like a pouty 2 year old. I would have spit in the cake mix...

spoiled brat! I hope that he is a nice boss work wise, well I suppose so considering that you a) still work there and b) have made all those cakes in the past!

I can't wait to find out if he ate it not today. hehee

Bahahahaha!!! Give us an update please if he ate it. Can never make some folks happy.

Tanna - yeah I kind of hope he doesn't either!

Ilva -he's not really, just an odd guy sometimes. I really like working for him when he's not driving me crazy.

Lis and FC - he's not here yet, but the cake is on his desk! I'll comment later!

Sara, this is hilarious!

I hope he eats the cake and APOLOGIZE.

Men will be men. I can't believe they can be so self-centered.

Ha! He definitely doesn't deserve one of your amazing cakes.

UPDATE - WE HAVE EATEN SOME CAKE. OK, we might have had a small fight first thing this morning about the fact I didn't ice the cake (jesus!!!) but all is good now. Cake has been iced and I've eaten two pieces. Argh!

Lol! Next year make him a cake but use a styrofoam base and ice it to look pretty and say happy birthday so he can blow out the candles. Then tell him you wanted to respect his new healthy lifestyle but still wanted to mark the occasion. Then he can have his cake! (insert evil grin here)

Have you ever posted the recipe for your famous carrot cake? I HAVE to have it!

That's too funny! Glad he ate the cake you made for him.