Since I mentioned my new favorite drink in this post a couple of weeks ago, I can't stop thinking about it.  It was delicious!  But I rarely leave the house, and Starbucks is pretty pricey, so all I did was dream of it.  And then I saw a video on the Tickey-Toks of a lady making her own, and I was like, I can do that too!

(BTW - another good person to follow on there is The Shaky Barista, who shows you how to make coffee shop drinks at home.)

So I made my own iced coffee at home and - it was pretty ok! 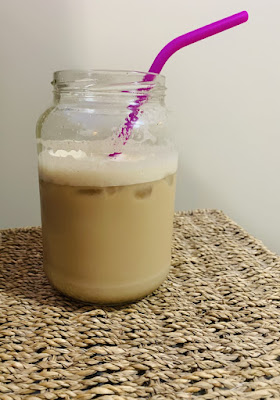 I put a couple of spoons of brown sugar, a dash of cinnamon and a tiny splash of vanilla into my jar, added a cup of hot coffee (6 oz pour from the ol' Keurig), and swished it around to dissolve the sugar.  I added a couple of scoops of ice, put the lid on the jar and gave it a good shake, then added milk to taste.  Not bad at all.

A friend told me about a brown sugar flavored syrup you can buy to add to your drinks, and just like that, I became the kind of person who has a bottle of flavored syrup in her cupboard to add to drinks.  I may also have become the kind of person who has a milk frother, but we'll leave that story for another day (when I've taken it out of the box and tried it). 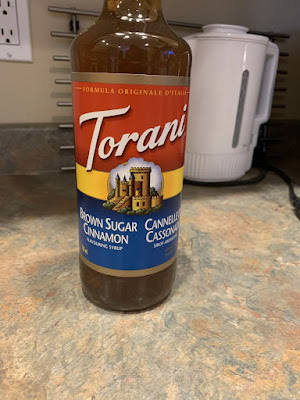 It has a different taste than the actual sugar and cinnamon ingredients, but it's not bad. 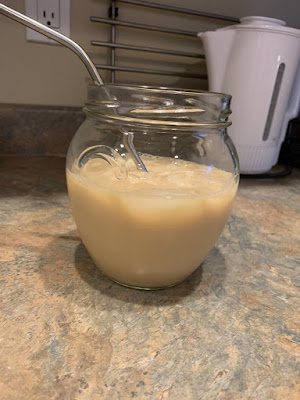 I've also learned there are sugar free syrups out there,
which I might try once this bottle is gone, but we'll see.
Who would have thought I'd be so in to making iced coffee?  Not me.
Posted by Sara at Tuesday, March 30, 2021