This was a super delicious Sunday Dinner - the sort where everything was perfect and went great. And then the next 3 weeks of Sunday Dinners were all disasters.

Let's talk about this one first - this amazing bread is from
The New Best Recipe and I was so proud of it.
Look! Artisanal Bakery Perfection. 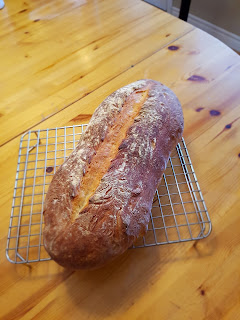 The pasta was from Guy Fieri's Family Food and was called Chicken Mamou.
It was delicious and made a ton - we ate it for days. 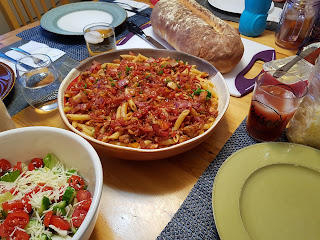 I don't recall dessert - might have just been ice cream?

It was all downhill from there though.


The next Sunday I made a turkey sandwich from the same Guy Fieri book and it wasn't very good.  It had an orange cranberry spread that was too sweet, too sour and too harsh all at the same time.  It overpowered everything else.  Disappointing.

The next Sunday I tried to bounce back with a chicken dish with a creamy sauce.  The sauce was amazing but the chicken was awful - so tough we couldn't chew it.  Everyone was discreetly spitting out wads of partially chewed chicken, as discreetly as one can do that.  I was MAD.  Next Sunday would be different! I vowed.

Well, it was and it wasn't.......
We tried the New York Times version of the Mississippi Roast, but with a sub for roasted peppers instead of pepperoncini, which is fine, but we had kid activities, and then needed to do some shopping, and by the time we got home we were running low on time for cooking.  The roast got the minimum cooking time, but it needed more.  The flavor was nice, but it wasn't very tender.

I don't think I'm a super amazing cook, or anything like that, but 3 less than stellar Sunday Dinners in a row was a kick to the pants, yanno?