Some more meals we've had


I have been doing a lot of cooking - a lot of new recipes. I haven't been taking many photos though. Not that that is much of a loss on this blog, most aren't great anyway.

Paxton will be 3 months old on Sunday and this thought delights and shocks me. Shocked because 3 MONTHS! It's gone by at a crawl and in a flash. And just like so many people predicted, I barely remember life before him. He's turned into quite a little personality, a charmer and flirt with anyone who comes into his life, and a bossy little guy for me and Scott, telling us in no uncertain terms when he doesn't whatever injustice we may be subjecting him to, such as a clean outfit, or a new diaper. The nerve of us!

A big lesson I'm still trying to learn is time management. Time didn't really matter BP (before Paxton) - if a dinner recipe was going to take 2 hours to make and dirty most dishes in the kitchen, no big deal. Laundry can be put off for another day. The dishes can sit a while.

Not anymore, unless we want to eat at 9pm (which still sometimes happens) and stay up all night cleaning. I'm trying to choose simpler recipes and also ones that can be prepped or made in advance.

This is something I've been reading about for a long time over at The Cookbook Junkie. Paula is a whiz at choosing recipes that can be made partially or all the way in advance, and reheated when it's time to eat. I'm working on this, using her advice to have a head start on dinners at least a couple of times a week.

A couple of days ago I made Paulas Spicy Honey-Brushed Chicken Thighs. I'd bought a big pack of thighs and broken them up into groups of 4-5 and frozen them. The day before, I moved a pack from the freezer to fridge, and the morning of, I rubbed the thighs (ooooo!) with the spice mixture and broiled them. This took no time at all and I got it done during one of the baby's catnaps. Then that night all I had to do was mix up the glaze and then toss the thighs back under the broiler for a minute or 2 to reheat before adding the glaze. They were wonderful and super easy. Even if you didn't start these in advance, this is still a fast dinner.


This is a Rachael Ray recipe called Turkey Cordon Bleu Crisp. I made this with some leftover chicken instead of turkey, and some ham I had in the freezer. 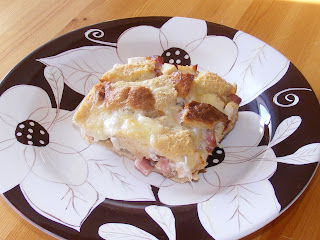 It's a savory bread pudding, and there's nothing wrong with that. I liked the flavors of the chicken, ham and swiss cheese. The recipe calls for you to drizzle with maple syrup before you eat, which I meant to do, but forgot. The next morning we had some of the leftovers for breakfast. I didn't think this reheated particularly well; for me it was a one meal recipe. I did remember to add some maple syrup and really liked that.
Turkey Cordon Bleu Crisp.

Another Rachael Ray recipe - Browned Butter Sauce. A very fast pasta sauce. Get your pasta in the water to cook before you make this. All it is is butter, salt, sage, parmesan and cream. 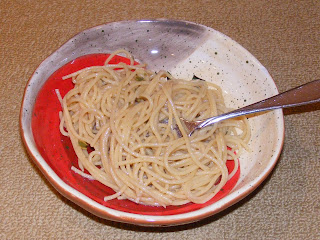 I loved this - similar to the pasta with myzithra I love so much. I used sage I hung up and dried from the garden in the fall, because I didn't want to buy a pack of fresh sage when I only needed 1 teaspoon.
Browned Butter Sauce.

I am a huge Bobby Flay fan, although I have not made many of his recipes. I found this one for vegetable meatloaf in the Food Network Magazine. I made 2 small ones instead of one big one so I could freeze one for later. 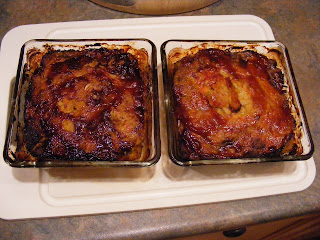 I loved this too, in fact I love meatloaf of almost any kind. Turkey meatloaf is not something I've made a lot of, but I will from now on.
Vegetable Meatloaf with Balsamic Glaze

I was sure I'd taken a picture of the Sauerbraten and Spaetzle I'd made, but I can't find any. This was another Food Network Magazine recipe. Sauerbraten is a German dish, like a pot roast. This one is marinated with broth, vinegar, onions, cloves and juniper berries. I couldn't find any juniper berries, but I don't think the dish suffered for it. If you make this, DON'T skip adding the gingersnaps to the sauce at the end. That is what makes it delicious. I had some trouble with the spaetzle, the consistency wasn't right I think, and by the time I had enough for the two of us I was exhausted, the kitchen was a disaster, and I had a couple of nasty steam burns. They were delicious though.
Sauerbraten
Spaetzle
Posted by Sara at Friday, February 26, 2010

The spicy honey-brushed thighs is one of my go-to recipes for boneless thighs. I like the concept of the Turkey Cordon Bleu Crisp, and the economic pasta with browned butter sauce. There are some great recipes in this post!

Yum, it is so great that you have gotten back to cooking already!
I can never find the FN mags here, sigh.
They all sound very tasty.

That's a great spread of meals.. I admire you! (I remember -however faintly- times that there were 3 starches on my stove and no greens or the other way around..complete brainfry after having the twins. NY Pizza became a dear friend in those days)

i was just saying to scott this morning that we've got to work harder on eating more veg and fruit.

It's amazing you have time to cook at all! Great job! I recently made sauerbrauten as well, but mine was just terrible! I dont think I made it terribly, I think just the recipe I used was very bland!

you're cooking all these adventures things, you're doing so well 3 month SP (since Paxton).
It took me a long time to function (sort of) normal again after both kids... just take your time!
Very curious about those towel animals tho....