For the past 3 holiday seasons we've branched out from the standard turkey and tried something new for Christmas dinner. Back in 2006 we went Swedish. 2007 was French Canadian, and last year we did Italian.
This year we didn't stray really too far from a traditional dinner - we had a Turducken.
A Turducken is a partially deboned turkey that's stuffed with a deboned duck that has been stuffed with a deboned chicken. And then the chicken is stuffed with stuffing. Sounds cool, doesn't it?
We were quite startled to find Turkucken in the grocery store here. I can't buy corn tortillas, but there's turducken?

Our Turducken was cajun style, stuffed with a sausage stuffing and in a spicy cajun rub. Here it is right before being tossed in the oven. 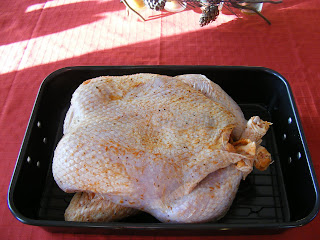 And here it is 4 hours later. Isn't it pretty? And very low maintenance. All we had to do was uncover it after 3 hours, and then take its temperature to make sure it's done. 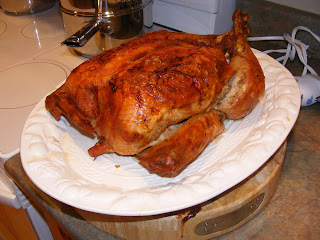 Here's the inside. Doesn't that make your mouth water? I was expecting to be able to see the 3 layers of 3 birds, but you can't tell the chicken from the turkey from the duck. Or at least I can't. But doing a search shows that this is somewhat normal.

The thing, by the way was amazing. The meat was so moist and tender and the cajun seasoning was excellent. 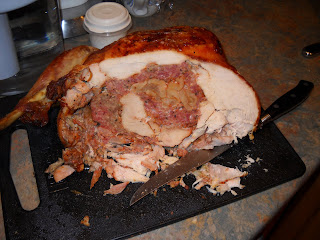 Here's our Christmas feast. We had dinner at our house and my parents were fabulous enough to cook all the food but the Turducken which we cooked and bring it to our house. They are super. In addition to the Turducken we had regular stuffing, mashed potatos, green bean casserole, brussel sprouts, roasted carrots and parsnips and of course gravy. The gravy was amazing. We also set out Christmas crackers, but didn't pull them for fear of waking the baby. 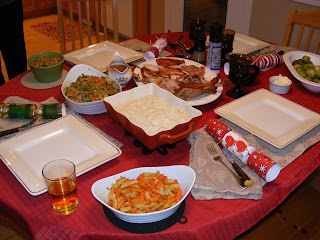 For dessert my parents made Louisiana Bread Pudding with Lemon Sauce and Chantilly Cream. No pictures, but ohmygod, you have to make this! Best bread pudding I've ever had and you can't skip the 2 sauces. Since I am typing this with one hand while I have the baby in the other, I won't write out the recipe, but here's a link to someone who's made it. The only difference I see in the recipe is that they've increased the raisins from 1/4 cup.
Bread Pudding, Lemon Sauce and Chantilly Cream recipes
Posted by Sara at Wednesday, January 06, 2010

OMG!!! You can't get tortillias but you can get Tuducken.

No fair. I always wait with bated breath to see what you Christmas dinner theme will be and love the Southern theme.

we did a Turducken a few years back for Thanksgiving. Cajun in fact. It was very good but we had to order it.