So here's my double love for this months WCC- I made the food that I love (pulled pork sandwiches) with the dude that I love. Did you see how I made it rhyme there? 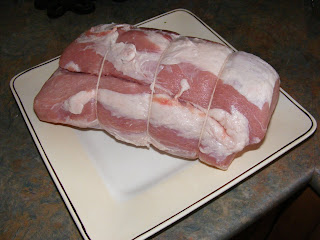 Here's my 5 lb boneless pork roast. The recipe calls for you to rub the spice rub on the pork right before you brown it. We rubbed in the rub the night before, wrapped it in a bag, and fridged it overnight. 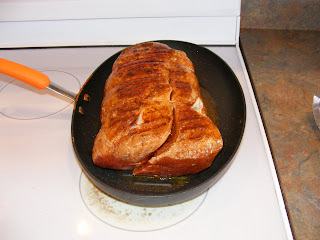 Then the next afternoon we browned the roast on all sides. 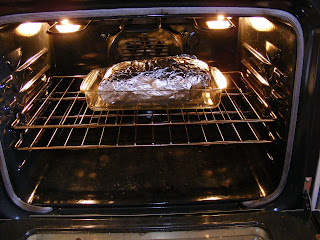 After the roast was browned it was wrapped in a double layer of foil, placed in a baking dish and put in the oven at 300' for 4 1/2 hours. Then you unwrap the top of the foil, exposing the top of the roast, increase the oven temperature to 450' and cook another 20 minutes. 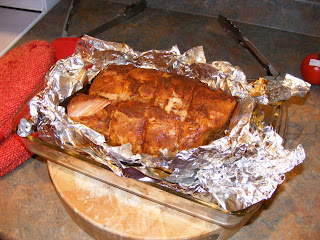 Here's the pork sitting on the counter as we tried to figure out how to get the pork AND all the juices out of the foil and baking dish. I was trying to pull back the foil so I could get at the pork, figuring I could lift the meat out in 2 or 3 pieces, then spoon out the juices. Instead, I tore the foil, and the juices started leaking out into the pan. "Did you hear that?" said Scott....... 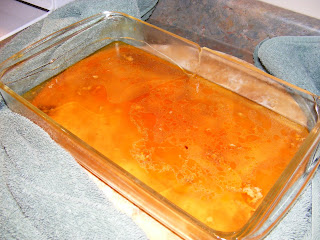 as a piece of glass broke off the dish and cracks appeared all over the sides and bottom of the dish. Frack. We put a bath towel around the dish, in case it shattered, and got the pork out of there. Most of the juice ended up in the dish, rendering it all useless. There was about 1/2 cup in the foil that hadn't been in contact with the dish, so we kept that. Dammit! Now I have to buy a new damn 9X13 pan. 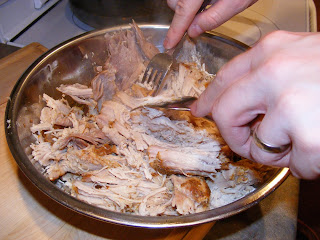 After we calmed down, Scott shredded the pork, added the reserved juice, and the rest of the dressing ingredients. 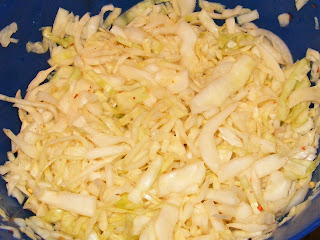 We made her coleslaw recipe too. It was too spicy. 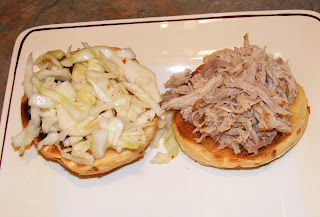 Coleslaw and pork on a toasted onion bun. 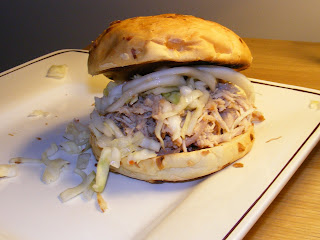 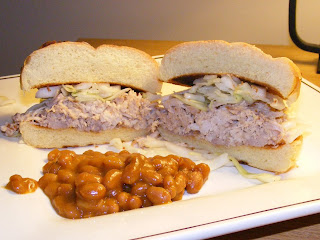 Served with a side o'beans.

This was heavenly! The pork was so tender and nicely seasoned. The vinegar dressing kept it nice and moist, and if I'd been able to use all the juices (I estimate I lost about a cup) it would have been that much better. I wasn't crazy about the coleslaw though - not very interesting and a little too spicy. The hot sauce we're using right now is nuclear-hot, so I cut back on the amount of hot sauce and pepper flakes in the slaw, but it's too spicy on its own. Good on the sandwich though. Also, boring - no carrot or anything else that could add flavor or character. The coleslaw recipe is here, if you're interested.
They seem to have edited the pork recipe online, so here's the magazine version.

Preheat the oven to 300'. Mix together the salt, pepper and paprika; sprinkle all over the pork and rub in. **I used 1 TB pepper**
In a large skillet or Dutch oven, heat the oil over medium-high heat. Add the pork and cook, turning occasionally, until browned, 8 to 10 minutes. Transfer to a 24-inch-long sheet of heavy-duty foil and double-wrap the pork.
Place the pork, skin side up, in a 9-by-13-inch baking dish; roast until tender, about 4 1/2 hours. Remove from the oven and carefully unwrap the top of the pork. Increase the heat to 450' and roast for 20 minutes more.
Transfer the roast to a large bowl, along with any juices. Using two forks, shred the pork. Add the vinegars, sugar and hot sauce; toss. Serve on the hamburger buns, topped with coleslaw.

Want to take part in WCC? Find a recipe that fits the monthly theme. You can use a recipe from a cookbook, magazine, website, your Mom, whatever. Make it, blog about it with a picture and the recipe (if you like) and email me a link to your post by February 28. I'll have the roundup posted a couple of days after that. My email is iliketocook AT shaw DOT ca.

Well this was lots of love !! I'll try to figure out some other rich of love food !!

Sara that looks so yummy! Who would think you could make something like that in the oven? It's usually charcoal grills and fancey smokers that I see in recipes.

Natalia - look forward to what food you LOVE

Lynn - yes i was very pleased with this - love that you don't need a bbq or smoker.

Bummer about your pan but yum on the pulled pork.

whoa, that looks so good! i love pulled pork sandwiches.