It's August, it's boiling outside (most of the time)....so why not leave the oven and stove off and head into the yard with your grill? That's the idea behind this months Weekend Cookbook Challenge, hosted by Moi. For those of you who have not yet participated in a WCC, find a recipe from a cookbook, magazine, or off the internet that fits the months theme, make it, write about it, and send a link to me. Easy like pie.

We like to use our grill pretty often, but most of the time we aren't very adventurous with what we cook. Many times if something is being marinated before grilling it's being done with a purchased sauce. Sorry if that offends. So I thought it would be fun to find a recipe that need a homemade marinade. And something with beef becuase I'd found a piece of steak in the freezer. And something fast, because we had plans to go out after dinner. And I found a recipe that checked off all those boxes in my second hand copy of The Frugal Gourmet On Our Immigrant Ancestors by Jeff Smith. 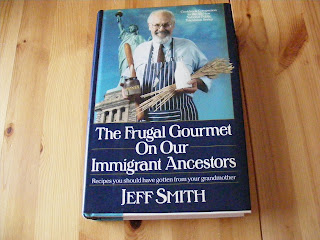 I haven't spent much time with this book, but I love it. Recipes from 35 different cultures from Armenian to Yugoslavian. There's some really interesting stuff. From the Korean Immigrants section I chose Beef Bulgogi.

I ended up altering the recipe in a couple of different ways. I omitted the sesame oil because I hate sesame oil with a passion. I also had to omit the sesame salt (ground toasted sesame seeds and salt) because I'd run out of sesame seeds. I changed some ingredient amounts as well, so really it came out more teriyaki than bulgogi. But it was very nice - speedy, and sweet and spicy. Because the meat was thinly sliced (well, as thin as I could, I really need new knives), it needs little time to marinate or cook. This isn't a 30 minute meal, but maybe 45. 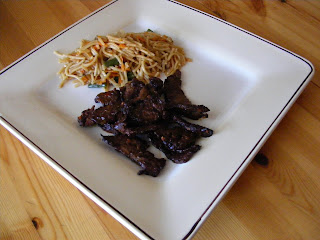 Slice the meat thinly and set aside. Mix the rest of the ingredients in a bowl, and add the meat. Toss to coat, and let sit for 30 minutes. Heat your grill over medium high heat. Remove the beef from the marinade and grill, turning once, 2 minutes per side or until done to your liking.

Serve hot, but the leftovers are tasty cold too.
Posted by Sara at Monday, August 11, 2008

I love the coloring - it looks really delicious.

WOW that looks good. You know, I just may participate in this one!

Oooh... looks and sounds so yummy.
I have yet to grill steak on my stove top grill (that's all I have), but this sounds tempting!

I used to love that cookbook! It was one of the very first cookbooks I ever bought for myself. :-) I wonder where it's gotten to? I haven't seen it in years. Thanks for the reminder to get it out again. There were tons of yummy recipes in there.

Cassie, I hope you do!

Annie - I'm sure that would work, also you could just broil it too.

Teresa - I am sorry that I went so long without this book - I only bought it about 2 weeks ago. It looks fantastic, and I will be cooking lots more out of it soon.

i love bulgogi but haven't had it in ages due to that vegetarianism of mine. now that i'm back to omnivorism, this looks fantastic! i will definitely to try to join up this month!