FINALLY, I managed to convince Lis from La Mia Cucina to host a round of Weekend Cookbook Challenge, after two years! She's chosen for her theme Crock Pots, Dutch Ovens and Pressure Cookers. I had to go with a recipe using a Dutch Oven, as I got my first one just last month. It's red, it's heavy, it was on sale for $35 bucks. What more could I ask for? My new pots first trip into the oven was a bit of a bust. I tried the No Knead Bread that everyone in the world has made. It didn't work out so well. But anyway.

A couple of weeks before Lis announced her theme I was cleaning up my cookbook bookcase and was looking at my Bouchon cookbook by Thomas Keller. Scott gave me this for Christmas way back in 2004. Just over 3 years later and I've yet to make one thing out of it! I told myself that I'd have to be sure to use it in one of the upcoming WCC's. When the theme was announced I quickly found the perfect recipe - Provencal Vegetables. In Thomas Kellers own words "A refined interpretation of ratatouille."

Onions (I used red), Peppers (I used red, yellow and orange), zucchini, eggplant and tomatos baked slowly in the oven for 3 hours. Yes please! The Bouchon recipe calls for yellow squash as well, but I could not find any. I just doubled up on the beautiful small zucchinis I found at the market. The recipe also suggests cooking the dish the day before you want to eat it, to let the flavors develop. We did this and it was fantastic. 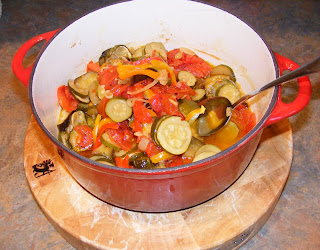 Preheat the oven to 275'.
Heat the canola oil in a large skillet over medium heat. Add the onions, peppers and sachet, season with salt and pepper, and cook for 15 minutes or until the vegetables are softened by not browned. Remove the sachet and spread the mixture in an even layer in a 12" ovenproof skillet or baking dish. OR DUTCH OVEN!
Arrange the sliced vegetables over the onions and peppers, beginning at the outside of the skillet and working toward the center, alternating and overlapping the slices. Mix the garlic, oil, thyme and salt and pepper to taste and sprinkle over the vegetables.
Cover the skillet with aluminum foil, and then with a tight fitting lid, and bake for 2 1/2 hours.Remove the lid and foil and return to the oven uncovered, for another 30 minutes, until the vegetables are very tender.
The vegetables can be served immediatly or cooled to room temperature and then refrigerated for a day or two. Reheat in a 350' oven until warmed through.

For all the deets on how to take part in this months WCC challenge, please check out Lis' WCC post.

There's something magical happening when you put all these veggies together and they form a new, wonderful flavour.

Sometimes I feel bad about so many cookbooks that I haven't made anything out of and then I do just what you've done here and that somehow seems to justify all the rest. Someday I'll make something out of each and if it's this fantastic, why should I feel bad.
Love this one. Going to try for this one today for tomorrow!

You are the bestest!! And I distinctly remember ME begging YOU to host. :P heeeee!

What you've made is like one of my top 10 favorite veggie dishes of all time. Although I've never tried Keller's recipe (I will.. oh hells yes I will!) I got to experience ratatouille for the first time last summer when Helene came to visit.. she made it for us and holy hell was it delicious!

I'm with Lis on this one. I love this dish, own this cookbook and have never cooked from it! (Yes Tanna too many cookbooks, not enough time)

But after reading this, I'm adding these vegs to my shopping list.

Can't wait to come back to WCC with this month. (How could I MISS Lis's hosting round?)

great recipe - love that it's crockpot-able. I think I could just set the crockpot on low for 3 hours.

Peter - you are so right, that is exactly what happens. I agree, I will have to pull this cookbook off the shelf again soon.

Tanna - I figure I'll get to all of them eventually, even if it takes a couple of years.

Lis - I have never had traditional ratatouille, and I may not after trying this one.

Mary - we'll have to have a Bouchon cook off!

SK - Yes you could easily cook this in the crock pot. Thanks for visiting! I'll be trying the bread again, I've bought new yeast.

Well I love Bouchon...if only I can get my man to eat veggies...sigh.

Oh I'm sorry your no-knead bread didn't turn out well... This provence vegetables look so good! Sara, sometime ago I promised you a polenta recipe, it's up on my blog, it is called bolognese polenta. Hope it is what you were looking for.