Shrimp and Beer in Foil

I go through cycles with recipes, where I'll make something over and over and over again, and then I'll forget about it for ages, years sometimes, until something clicks in my head and reminds me of the dish.

I used to make this dish - chicken and vegetables cooked in parchment paper - before I started to date Scott, which tells you how long ago that was. (A really, really long time ago.) Anyway, I used to make it quite often, thinly sliced chicken breast sitting on some sliced leek and carrot, sprinkled with white wine, and cooked in the oven. It was good, it was quick. I'm not sure why it totally left my radar until I saw a commercial for the new Presidents Choice en papillote entrees, and in a flash I was in the kitchen to see if we had all the ingredients to make my version. We didn't, but I think I came up with something even better - Shrimp cooked with Beer in Foil!

The thing about cooking in parchment paper - or foil - is that the food is sealed in with the liquid and steam. You cut the meat thin so the packet cooks quickly, and with the added liquid (water, broth, wine, beer, juice) you don't need to add any oil, which is great. You can make one big packet or small packs for each person, whatever you want.

Preheat your oven to 400'. Tear off a large square of foil (which is easiest) or parchment paper. Thinly slice some vegetables (I used thinly sliced zucchini and carrot strips peeled with the veggie peeler) and lay them on the foil. Top with raw shrimp that have been peeled and deveined. Pour a few tablespoons of beer (or water, wine, juice...) over top, and season with salt and pepper, or whatever seasoning you want. We used our salad spice grinder seasoning, which goes with pretty much anything. 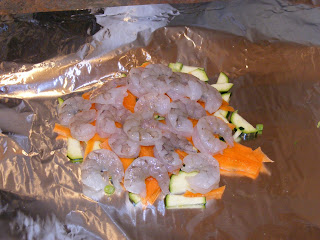 Then turn in the sides and wrap it up snugly, with no openings for the liquid or steam to escape, but leave some room for the steam to move around in. Toss in the oven for about 8 minutes or so, until the shrimp are cooked and the veggies are crisp-tender. 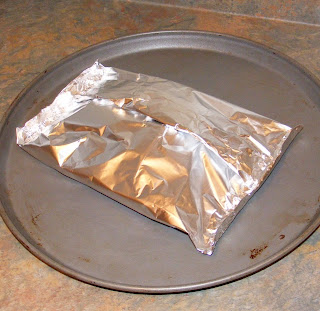 Remove the packets from the over and CAREFULLY open them - remember there's going to be hot steam and liquid in there. 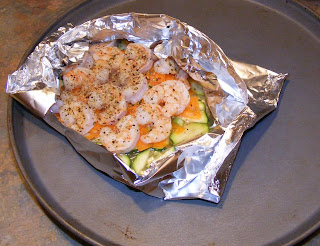 Remove the shrimp and veggies to a dish with a slotted spoon, or just do what I do and dump the food and liquid into a bowl. That way you can mop up the juices with a piece of bread. 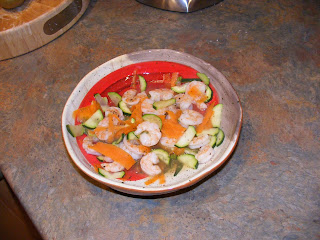 Sara, I love cooking in packets...so much so that I even do it with a lunch bag!

what a fun and creative way to make shrimp! so easy too.

Yes, there are recipes that come back in a flash like that and I never know why I stopped making them.
This is utterly lovely and open to so many combos.

Peter - I've not tried that before, but I should.
Gaga- yes it is very very easy.
Tanna - you are so right.

I love LOVE cooking in foil packets.. especially in the summer. When we grill chicken or beef I throw potatoes, onions, and a pat of butter or two in a foil packet and lay it on the top wrack of the grill. I also do this with mushrooms, sliced sweet onion and a splash of wine - and again with other mixed veggies. By the time your meat is grilled to perfection, the veggies are also done. YUM! And virtually no clean up! party on!

Also.. if you like your taters a lil on the crispedy side? Put the packet over the hottest part of the grill and they'll turn out like roasted potatoes with crisp outsides and creamy goodness inside. :D

PS - These lil shrimps and veggies will be going on our grill this summer.. FOR SURE! xoxo

After seeing your contribution at the WCC roundup, I thought I would pop over here for a peek. I am so glad I did! You have some fantastic food here!
Sara;)