Speaking of more, you know what else there should be more of in life? Cookbooks and French food. And you are in luck, because this post happens to be.....

a review about a French cookbook, The Country Cooking of France by Anne Willan.

Anne Willan is the author of more than thirty cookbooks, as well as the founder of a cooking school in France, La Varenne Cooking School. Ms. Willan has won numerous awards, including "Cooking Teacher of the Year" in 2000 by Bon Appetit Magazine. So you know that she knows her stuff.

Her newest book, The Country Cooking of France, is the first of her books I've read. What a shame for me! This is quite possibly the most beautiful cookbook I've ever seen. The photographs of the food and the pictures of France (a country road, a dog hunting for truffles, a bistro with stacks of chairs outside) are stunning. The short essays sprinkled throughout the book (on everything from garlic to horse meat to water) are all read-worthy. This is the sort of book that makes you want to sell your worldly possessions and run away to France. Anyone care to join me?

There are 17 chapters in the book; soups, eggs & cheese, game birds, and vegetable tarts are just a bit of what is covered. In addition there is a glossary full of techniques, recipes and equipment, which is immensely helpful if you are not too familiar with French cooking.

The recipes are are easy to read and clearly instructed. None seem too intimidating and the variety is vast, from simple lentil salads to home made pates and cassoulets. Get this one on your lists folks! You won't be disappointed. 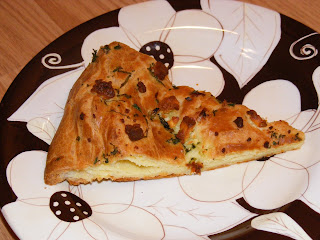 This is a most delicious cross between a pizza and cheese puff. Pate a Choux dough is spread on a pan and topped with herbs, garlic, and goat cheese (I also added some chopped green onion). The "pizza" tastes like it has bacon on it, but it's the smoky gruyere that's mixed in the dough. Totally fantastic. 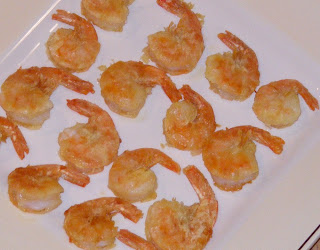 Gambas Grilles au Sel de Mer (Seared Prawns with Sea Salt)
Shrimp tossed with salt and cooked in their shells. A bit messy but worth it. 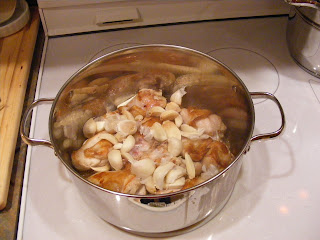 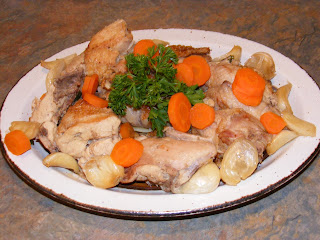 Oh my. For years I've read recipes similar to this but never tried them. The chicken was so tender and the garlic? Yum. 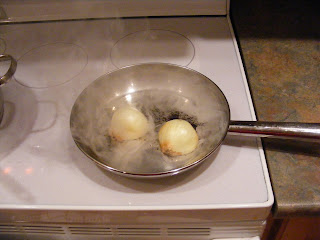 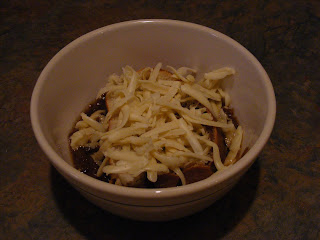 I have to say, in all honesty this is the best French Onion Soup I have ever made. And I have made a lot of onion soups. I think the secret is the caramelized onion, as shown in that top picture. Unfortunately I realized at the last minute that my bowls are not oven safe, so I couldn't broil the soup to melt the cheese. But it was still amazing.

Melt the butter in a soup pot over low heat. Stir in the sliced onions, season with salt and pepper and press a piece of buttered aluminum foil down on the onions. Cover the pan and sweat the onions over very low heat, stirring occasionally, 20 to 25 minutes. Remove the lid and foil, raise the heat, and continue cooking, stirring occasionally to prevent scorching, until the onions are reduced, concentrated, and very dark brown, 8 to 10 minutes longer.

Meanwhile, char the halved onion. Heat an electric burner until hot, or heat a small saute pan over a gas burner. Sprinkle the cut surfaces of the onion with the sugar and set the halves, cut side down, on the burner or pan. Cook until dark brown, 2 to 3 minutes. When the sliced onions are ready, stir in the broth and add the charred onion. Cover, bring to a boil, and simmer to blend the flavors for 10 to 15 minutes. Discard the charred onion halves, taste the soup and adjust the seasoning. The soup can be made 2 to 3 days ahead and stored in the refrigerator.

Preheat the broiler and reheat the soup if necessary. Put 4 to 6 deep flameproof soup bowls on a baking sheet and heat in the broiler. Set 2 to 3 croutes in each bowl and ladle the soup on top. Sprinkle with the cheese and broil until the tops are browned. Serve at once - the onion soup must be scalding hot.

That giant gougere is so tempting, Sara!

Join you are you kidding! I'm there . . . at least I dream every night.
I have to have the Gougere Plate Au Fromage De Chevre, for that I'll get the book.

After pledging to NOT buy any more cookbooks until after April 1 you go and put a review of up of this book.

Did I say thanks? I just broke my resolution...

That Gourgere looks incredible and the shrimp to die for. I can't wait for Amazon to deliver this thing!!!

Patricia - it was heavenly!

Tanna - where shall we meet?

Mary - you will love it! And there are so many bread recipes that look wonderful.

This is exactly what I need, more cookbboks! Actually, at this point, I kinda do... I left over half of mine at home and I'm feeling a bit out of sorts without them...

Brilyyn - this fits perfectly into "go big or go home". This is a "BIG" book.

HC - Thanks, it was fantastic.

My local library system unfortunately does not carry this title, but I will seek it out on the basis of your rave review.

I'm definitely up for heading to France with you! And now there's a brand new book to add to my list. Thanks for sharing. I don't know which recipe to try first ;-)!!!

I love the sound of something that tastes like a cross between pizza and a cheese puff!

That is one big thumbs up of a review for a cookbook.

Sara, darling ~ Happy New Year! I'm so glad that you have presented this book because I have it on my Wishlist and have lately been leaning towards that naughty "buy" button. That your selections from the book have been so successful is very promising. I have been meaning to read her other books, too.

It is one of my resolutions to review more cookery books on my blog as, essentially, that is what I do, only one recipe at a time from all of my books. I have been waiting for things to get sorted out re: employment and place of living before embarking on any projects though. Hopefully things will be sorted out before too long.

I don't resolve to get thinner...I'll just do more yoga, so I can put off omitting things from my diet for another year or so!

That large flat gougere is such a great idea! I had never thought about applying the dough in that way and it looks like it was successful- yum!

Another delicious Sunday Dinner!   Both of these recipes came from the Eat Street cookbook -  Yassa Chicken, a Senegalese dish with oli... 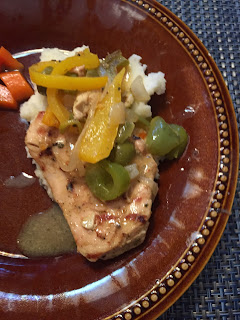