Food TV.ca Cooking Club - I messed up my merengues.

June is the second month of Cooking Club at Food for Thought. This month's recipe comes from French Food at Home: Crisp Chewy Meringues. Like most people, I am guessing, the only meringues I have ever encountered are those pale, bone dry, hard as rock horrors sold in the bakery department of grocery stores.

I was not planning on participating until I read a comment left on this post by Laura of the Meringues. She asked that the people who were leaving comments saying they hated meringues to try these and see what a real meringue is supposed to be.

I'll quote Laura here: This recipe makes you understand why meringues were invented in the first place: they crunch on the outside (but there's just a membrane-like crust of that crispness, like thin ice), then you sink through a stiffly foamy limbo into a centre of marshmallowy gooiness.

Because I had never made meringues before I decided I would follow the recipe to the letter. I whipped the egg whites with the salt, cream of tartar, and sugar. I played it safe and chose to use vanilla over the orange water, and my uncooked meringues looked and smelled beautiful. Then the trouble started. The recipe says it makes 16 meringues. They were enormous! But I had to follow the recipe, so 16 it was. After the 1 1/2 hours of cooking the meringues had colored beautifully, but they were not crisp. So I kept them in the oven. For another hour. Then it hit me - the meringues would probably crisp us as they were cooling - just because they were so large didn't mean they needed so much extra oven time. I took them out of the oven, but I knew it was too late. We cracked open the largest one before it had cooled and managed to pull out a thimbleful of delicious somewhat soft goo. As the meringues hardened though, it was apparent I had made the exact cookies I hate so much - rock hard, use-them-as bricks meringues. 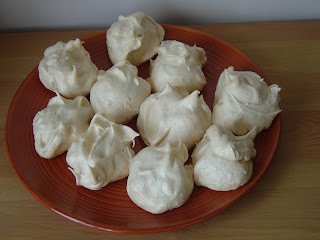 They look pretty though, don't they?

But, the bit of meringue we were able to salvage was delicious! It was exactly as Laura had described it - sweet and marshmallow-like and addictive. We were sorry we had such a little taste. I will be making these again, although not before the deadline of cooking club. Next time I will be more confident in myself and the recipe, and maybe go wild and use the orange water too!

Thanks for the head's up. Meringues can be a nice ligh an slightly sweet treat and I think I have an idea for a variation!

I'm a big meringue fan! My mom made them for each and every birthday, crisp on the outside and deliciously gooey within.
Do try again, even plain white ones are such a treat, and then there's adding nuts, chocolate.... or even dot merinque, top with a small piece of strawberry and cover with merinque and bake.. *drool*

My mom-in-law bakes some very nice stuff with meringues. :) I personally haven't tried my hands on making them myself. One day soon I will. Your meringues looks very cute.

I freakin' love meringues! I have had my battles with them as well, though.. My go to recipe is one from Debbie Field's Cookie Book(Mrs. Field's Cookies), they are chocolate and they have the crispy outside and the gooey marshmallowie yumminess inside.

My one piece of advice for when you try again is this: I failed miserably until I took Debbie's advice - after you blob or pipe them onto a cookie sheet, let them sit for 45 minutes or until they aren't sticky anymore. Her recipe calls for 200º F, but I can't imagine the 25º difference in Laura's recipe would matter too much? Personally for me, I really think letting them sit to uhh set? was what did the trick for my meringues. =)

Good luck - I wanna see you make them again! :D

Aww they do look pretty. Well you live and learn.

Deborah - I think there is lots to be done with them, I just need to work on my oven skills first.

Lis - thanks for the advice.

Hi there. Just found your blog. And guess what... meringues are baking in the oven right now. Try this very simple recipe http://www.bbc.co.uk/food/recipes/database/meringueswithclotted_516.shtml It does take a long time to make them, but hey, they are well worth it.