I've got your attention now, don't I?

As I mentioned yesterday we tried two new recipes last night when we got home from the hockey game. (Peabody - the Hitmen won 4-3, but the Blazers played so well it was surprising they lost.) I'm not really a Rachel Ray person, but I'd caught the last few minutes of an episode of 30 Minute Meals a few days ago and one dish was stuck in my mind. When Scott said he wanted chicken wings this weekend, I asked him if he'd mind having Buffalo Popcorn Chicken Bites instead. 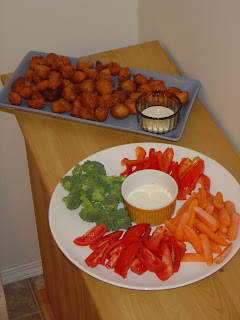 served with fresh veggies to combat the batter and grease...don't think it worked.

I've recently discovered the reviews that come with the recipes on foodtv.com so I read them first. While most people liked the chicken, there were a lot of comments about the batter being too thick and not being able to taste the hot sauce. We kept that in mind and both comments turned out to be true. I added about another 3/4 to 1 cup of water to the batter (there was also way too much batter made) to get it to a consistency we were happy with, and, I am not exaggerating, we used 4 times the amount of hot sauce AND the chicken was still only mildly spicy.

But, these were delicious and I would make them again. Not soon mind you; that's a lot of dough and oil.


Saturday I was going through some papers and I came across a recipe my Mom gave me about 2 years ago for a drink that was served at a party they attended. 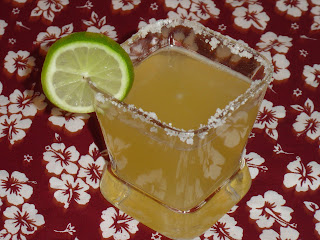 Mix the Limeade concentrate and Tequila together in a large jug. Add the Corona and stir well. Serve over ice in glasses with salted rims and lime wedges.


These are so good, but lethal! Do not serve these if anyone has to drive or get up early the next day. As I write this, Scott is lying on the couch with his head in his hands.
Posted by Sara at Monday, February 19, 2007

The chicken looks great and I love that you tried to healthy it up with the fresh veggies.
I'm not a big beer fan, but that drink sure does sound interesting~!

I am loving the idea of beer with tequila!

Tanna - oh you have no idea HOW great!

Annie - it was a futile attempt, but I felt I needed to try to make it healthier. I hate beer, but these were really good.

Freya - They are made for each other!

Yes you did get my attention with fried stuff and beer. Isn;t that the Canadian National Slogan...well Hockey, Fried Stuff and Beer?