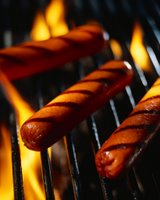 Who: The Hot Dog.
What: Most hot dogs are made from lightly seasoned beef or pork. There are also chicken, turkey and vegetarian dogs too.
When: The hot dog was invented in the 17th century in Germany. Today, they are a staple of summer - sports games and backyard barbecues.
Where: They became popular in North America in the late 1800's, known as Frankfurters. The name "Hot Dog" became popular in the 1890's.
Why: Shockingly, Hot Dogs don't really provide your body with any nutrition. An Oscar Mayer Beef Frank - alone, with no bun or condiments contains 140 calories, 13 grams of fat and 460 mg of sodium per dog.

In Europe in the mid 1800's people said that trucks roamed around cities collection stray dogs that were then taken to factories and ground up to make the sausages, and they were called "Dog Sandwiches".

The debate rages on as to what are "acceptable" toppings for hot dogs. Some insist it's mustard only. For others it's Sauerkraut. Chili and cheese? Relish and onions? Ketchup and pickles? Plain? Pick your favorite.

We have two "gourmet" hot dog shops in Calgary and recently Scott and I checked out Le Chien Chaud. We tried two dogs - the Mexican and the French.

The Mexican Dog was loaded with mustard, salsa, ground hot peppers and cheddar and topped with a sprig of cilantro. This is a dog not for the faint of heart - this bugger was spicy!!! We had a hard time finishing it. 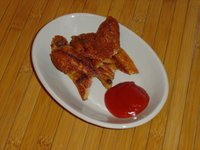 How can you talk about hot dogs and not mention Corn Dogs? Make your own corn dogs at home - go here. Link to Food and Wine site via Nosheteria. 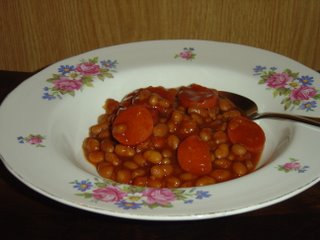 In a small pot over medium heat combine the beans and hot dogs. Add the hot sauce and bbq sauce and heat until the hot dogs are hot. Check seasonings and add more hot sauce, bbq sauce and salt and pepper as needed.
Posted by Sara at Friday, November 10, 2006

Great Post! MBH's all time favourite meal and the one I've served him for the last five years running? Chili Dogs topped with onion and mustard, complete with number candles squished in between the bun and dog. And after last night's chili and corn muffins tonight's meal? Yup, Chili Dogs....

I love my mom's relish an use it in entirely unreasonable quantities, I say the only reason I eat hotdogs is to eat the relish. But I could probably be convinced to eat chili dogs too...

For some strange reason, my dad likes pork-and-beans sandwiches. When I was little my mom would make a hot dog cheese sandwich. She would put a little mayo on a piece of bread, cut up the hot dog and put the pieces over the bread, top it with cheddar cheese and toast it so that the cheese melted. That was one of my favorite lunches. I don't know if I'd eat that now...I have to be in the mood for a hot do to eat it and that usually doesn't happen.

Excellent post! I love it when foodies include culinary history or factoids in their entries.

As a side note: between you and everyone else who is raving about Dorie Greenspan's new book I am beside myself with envy. I spent about 30 minutes looking through it at the bookstore the other day, it looks like such a fabulous collection of recipes. Alas, $40 is a bit much at the moment, so my new quest is to convince the library to buy it. Wish me luck!

Im a bit traumatized by that info on the dog trucks. Eek.

on the other hand, I love the picture of hot dogs with brown beans...yummm...