For Blog Party 15 Stephanie from Dispensing Happiness chose a literary theme, asking us to come up with some treats inspired by or from a novel.

Stuart McLean is a Canadian author, journalist, teacher, radio host and performer. He is the author of many books including the popular Vinyl Cafe stories. He has a radio show on the CBC and also tours Canada. Scott and I have been lucky enough to see him twice in the past couple of years.

My favorite story of his is from his book Home From the Vinyl Cafe and is called "Dave Cooks the Turkey". It's also available as its own book and is on Stuart's Christmas Collection CD. It is a priceless, hysterical story; Dave decides to help out his wife Morley at Christmas by offering to prepare the turkey dinner while Morley takes their children to help at the Food Bank on Christmas Day. Dave does not realize until he goes to bed on Christmas Eve that preparing the turkey also means buying the turkey. What happens next...well, you really should read it yourself to find out.

In honor of Dave and because we Canadians had our Thanksgiving dinners on the 8th, I made Turkey Quesadillas. 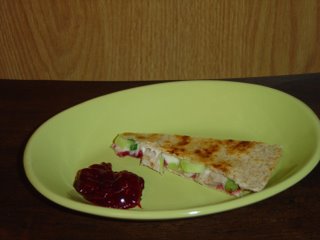 **I made my cranberry sauce from the recipe on the side of the cranberry bag but cut the sugar by half so it wasn't so sweet.

I have recently discovered Nutella; it is the best stuff on Earth. Where has it been all my life and why did no one tell me about it sooner? I whipped up a little chocolaty treat for the party - Nutella Tarts. 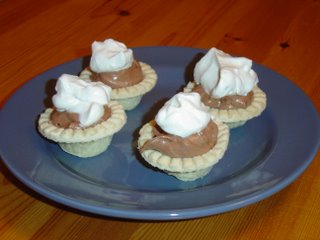 I filled baked mini tart shells with Nutella and whip cream blended together, then finished with a dollop of regular whip cream. These went fast let me tell you. I made 8 for 4 people and probably should have doubled it at least!

Our drink veered us close to Christmas territory what with the turkey and all. But the stores started selling Eggnog here earlier this month and my boss for some reason bought bottles for everyone at the office. We added rum to ours, but it's just as delicious plain with a sprinkle of nutmeg.
Posted by Sara at Tuesday, October 17, 2006

That must be one good story!

Nutella is God's gift to womankind, I'm sure of it. I use it for all sorts of things.

Thanks so much, and I'll 'see' you Saturday!

I love the idea of a turkey quesadilla.
Oh yeah, Nutella, you know how I love it so.

hahhaa! I love the premise of the story and will look for this author so I can find out what happened! The quesadilla's look yummy and the tarts - well.. *swoon* ;)

I love that story so, so much. I've listened to him tell it on CBC several times and laughed until I cried each time. By the time he hits the hotel...

Ha! I loooove the Vinyl Cafe. I can't remember which episode it was, but I feel like it was a holiday one, where Dave mixes up the adults and kids punch bowl and then kids end up drunk and Dave takes them for a drive and runs into Ride Patrol.... I hope you know the one I'm talking about or this is all just nonsense rambling.

Stephanie - thanks for Blog Party!

Peabody - it was good! Everyone was a bit hesitant of the cranberries at first, but I think that was the best part.

Anon - I know, me too. We saw his Christmas concert last year, but he didn't do that one. Too bad.

Brilynn - yes I know the one you mean! And then at the end they realize the only reason Stephanie isn't drunk is that she was drinking out of the adult bowl! Hee!

Oops, anon is actually me. The blackberry is not the best way in which to post comments, I have discovered. But what else are you going to do when trapped by a chessgame and a woman holding forth a book of puzzles?