Our garden here isn't great - poor soil and sloped - and we don't have a lot of luck. Potatos have never grown, or onions. Carrots do ok. A few years ago we tried kale and it went bonkers.

Two things that grow well though, are our herbs (the chives, mint and oregano come back year after year) and the rhubarb.

This year has been a banner year for the rhubarb. Pretty much the second the sun came out the plant just exploded with lovely red stems. I cut what felt like a ton of stalks off the plant last weekend to do some cooking.

First I made an old standby - Stewed Rhubarb. I decided to follow a different recipe instead of my usual. Big mistake. The recipe called for 1 cup of sugar and against my better judgement I put in the whole cup. It looked and smelled gorgeous, but when I tasted it, it was just too sweet. 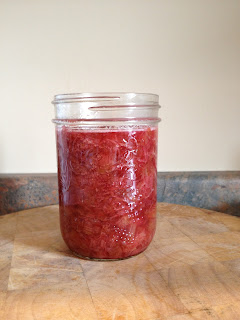 I figured I could buy some plain yogurt and mix it into that for breakfasts, but then I decided on a more decadent treat - Rhubarb Fool. 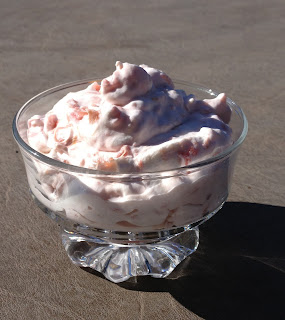 Unlike the Rhubarb Strawberry Fool I made years and years ago for a Weekend Cookbook Challenge which also had sour cream and brown sugar, this one had just 2 ingredient. Stewed rhubarb and freshly whipped cream. It was good.

And to use up a bit more rhubarb, I made a batch of Rhubarb Muffins from the Canadian Living website. 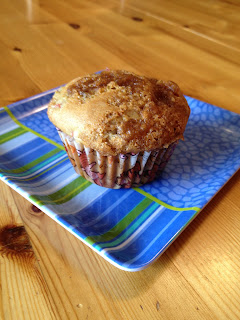 They were really good.  The crunchy strusel like topping added just enough sweetness.  I should probably make another batch.....

Recipe Rhubarb Muffins
Posted by Sara at Saturday, May 25, 2013