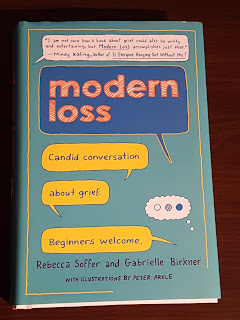 "And that's the worst part: you can make the right decision, the very best decision you know how to make for yourself and your family, and still have cause to mourn."

"If you use the sentiment or the words "at least" in response to someone's suffering, you're diminishing their feelings, probably because their pain makes you anxious."

"They do not all want a response, or an Internet friendship.  They just want to been seen - to have another human on this earth know their story - so I treat each one as the honor that it is.  I see your broken hearts, strangers.  I have added them to my collection."

I bought this one while researching another book on loss - that day I ended up buying 3 books on the subject and this is the first I've read.
Posted by Sara at Wednesday, May 30, 2018

Smackdown - A Twist on Chocolate Chip Cookies (Salted vs Malted)

Everyone in my fam- The Grandfather included - loves cookies. And chocolate chip cookies reign supreme. Over the years I have tried dozens and dozens of recipes- crisp,soft,cake style, you name it. In the past while I tried 2 cookies - with a twist - and here they are, pitted against each other for your enjoyment. We have the internet sensation Salted Chocolate Chip Shortbread Cookies from Alison Roman vs Malted Chocolate Chunk Cookie Bars from Food 52.

First up, and baked first are the shortbread cookies.  These were all over the internet in the Fall and often labelled "The Best Cookie Ever."  We - me and The Mister - are pretty big fans of shortbread, and I love salty-sweet combos.  So win-win already, right?
After the dough is rolled into a log, you are supposed to roll it in demerara sugar before slicing.  I skipped that step, but after the cookies were sliced and on the baking sheet, I sprinkled the top of each with a pinch of salt and sugar that I mixed together.
These just might be the best cookie ever.  We loved these. 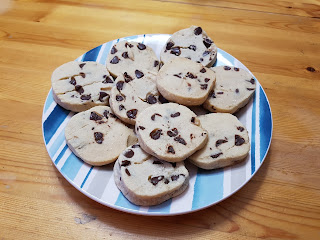 Next - the cookie bars.  I wanted to try this because I had no idea that malted milk powder was the same as Ovaltine.  Whenever I see a recipe that calls for malted milk powder I always stop reading because I thought it was some specialty ingredient that I couldn't get here.  Who knew!  Not me.  The other "twist" in this recipe was that the butter is melted and browned before being added to the dough.  Now I am a raw dough eater/tester (don't judge me) and I swooned when I tried the batter.  The flavors of the butter and malted milk powder were distinct and delicious.  Sadly, they disappeared into the baked bar, which was very very good, but neither of the flavors shone through in the finished product.  That did not stop us from inhaling these though. 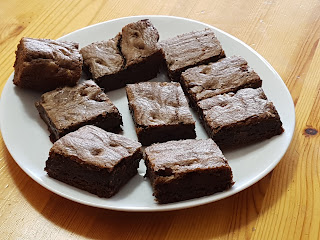 Both cookies are amazing and you should try them, but the shortbread were just a little more amazing.
Posted by Sara at Thursday, May 24, 2018

Book Club - Prisoners of the North by Pierre Berton 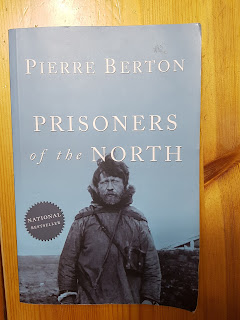 "The industrial revolution in the gold country sparked by Boyle had changed the face of the Klondike, and there was no environmentalist movement to protest or prevent it.  The low, rolling hills had long since been denuded in the growing hunger for lumber.  The broad and verdant valleys were reduced to black scars by the big nozzles that tore at the topsoil and overburden to send the muck and silk coursing down to the big river."

"As Francis Spufford has pointed out, more expeditions have managed to travel safely to the moon and return than had been able to navigate the Passage from sea to sea."

Y'all - there is a Kamloops connection!

On the poet, Robert Service -

"There are some hints of a schoolboy love in Glasgow and an affair, later, in Kamloops, BC, but only hints."

"In July 1904, he was transferred to the bank's branch in Kamloops where he immediately bought a pony and tried to take up polo.  He hated the game but loved the costume and had himself photographed in it to send to his family.  He bought himself a banjo and strummed away at it happily during his leisure hours."

I bought this one years ago at the Symphony Book Sale and decided it was time to read it.  A long read, but good.  Makes me want to travel up North and see this part of our beautiful country.
Posted by Sara at Sunday, May 20, 2018 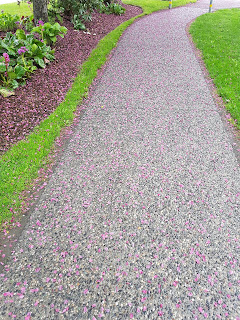 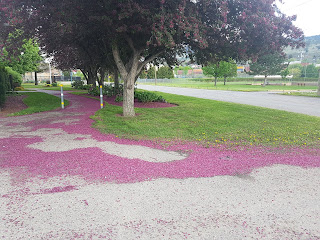 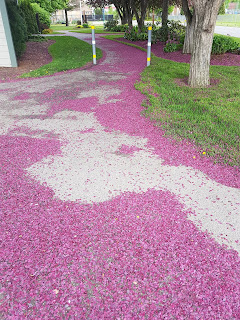 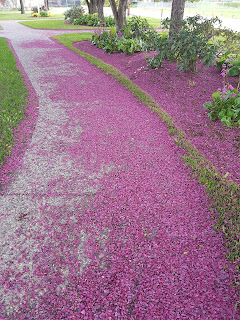 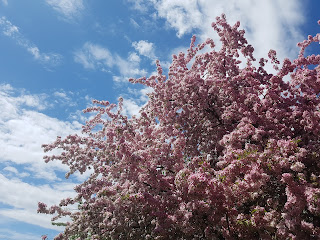 I enjoy making bread but sometimes I just don't want to do all the forming and rising and and rolling and more rising and shaping and then more rising, you know? Sometimes you just want some bread dang it!
So I tried a loaf of no knead bread where you make a simple dough, mix it only enough to combine the ingredients, and then let it sit on the counter for up to 24 hours before you bake it.
Ok, there is one forming/rising session but it's right at the end so I am ok with that. 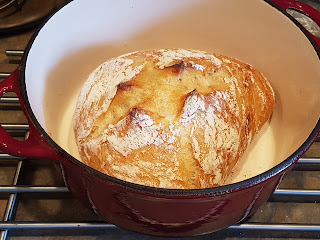 This produced a super delicious loaf of bread that was nice and crusty on the outside and chewy and just a little tangy on the inside.
The Mister was completely selfless and let The Grandpa take home the other half of the loaf we didn't eat for Sunday Dinner, so I owe him another loaf.
This time I'm going to let the dough sit for the full 24 hours to see if the flavor deepens. 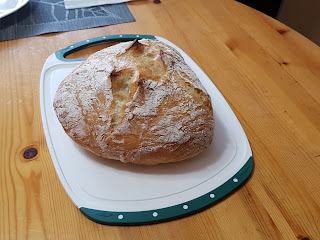 There is just something about taking a loaf of homemade bread out of the oven.
Such an accomplishment.  So tasty with butter.......

Recipe - homemade artisan bread
Posted by Sara at Tuesday, May 15, 2018

I spend time every weekend online looking for new recipes to cook for the family. Things that the kids might eat, things that are at least somewhat reletively healthy, that don't take too long to cook and/or have at least an element that can be made ahead of time.
(That last one sticks in my craw a little as we have one of those side by side fridges where 1/3 of the fridge is the freezer, which means all the shelves are narrow and short, which fills up fast and makes it impossible to premake things and keep them in the fridge.)

Anyhoo I have been focusing less on flipping through stacks of cookbooks and using Pinterest more to narrow my search options to find things that might fit not only my requirements from above but also what ingredients I have on hand.  And it works pretty good, other than SO MANY websites that have 38 pictures of the exact same plate of food at 7 slightly different angles before you can see the recipe.  Not a fan of this trend.

So!  I found this recipe for an enchilada casserole that ticked off some of my boxes and I love Mexican style food and tater tots.

I made the enchilada sauce from scratch seeing as it is very hard to find canned enchilada sauce here.  But that is ok - it is an easy thing to do, and if/when I find the recipe I used this time, I will share it with you. 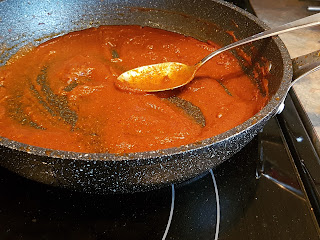 After I made the sauce, I cooked the meat and simmered it with the other sauce ingredients, and then I cooled it and stored it in the fridge, since a 9x13 pan of food wouldn't fit in the fridge.  Then on meal day all we had to do was dump the meat in the dish, add some cheese and tots and cook!

A couple of weeks ago I spotted a black fluff on The Boy's shoulder and I went to brush it off - and it was a TICK just beginning to burrow into his SKIN.  He'd been at the Wildlife Park that morning with his sister so we pushed aside the heebie jeebies and picked through their hair to make sure there weren't any more.
The Boy had one in his hair a few years ago so he's obviously delicious, and a FB friend had mentioned that she'd found a couple of her kids clothes and it was starting to freak me out, so I did some investigating into making a tick spray.
Top essential oils to use that I came across in my research were eucalyptus, lemon eucalyptus, lemon, lavender, and geranium.
Lavender is too strong a scent for me, and the one natural food store I've been to so far didn't have geranium, so I got a bottle of lemon eucalyptus and a bottle of witch hazel and made my own spray. 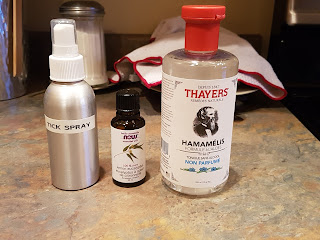 I used a tablespoon of witch hazel (I realized after I'd opened it that the lady sold me a bottle of witch hazel toner, but since I'd already opened it I'm hoping it's pretty much the same) and 40 drops of lemon eucalyptus oil and topped it off with water.
The Mister and I tried it out on ourselves to make sure we didn't break out in a rash or anything so we've been using it on the kids along with always wearing their hats and hopefully we won't find any more.
The Boy has heard some stories about ticks from his friends and there was Big Drama at school last year when one was discovered in the hair of one of his classmates, so now he's even more obsessed with them- so much so that he picked the TICK as his animal to do his science project on, so now I get to research these gross creatures even more.....shudder.
Posted by Sara at Tuesday, May 08, 2018

Labels: beautiful bc, how to, kamloops

Book Club - What She Knew by Gilly MacMillan 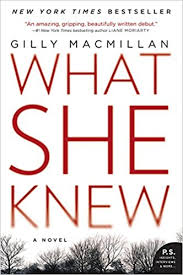 "There are no harsh lines in the picture.  Blacks fade into grays and into whites, and shadows draw the features of his face and torso."

I bought this from Costco because I wanted a new book to read and it was inexpensive.  It was a bad impulse purchase because I don't like crime novels and I do not like books about kids in danger, so it was dumb of me to get it.  Not my kind of book at all.

I love me some aromatherapy and I have for years.  Rarely a day goes by that I don't bust out at least one oil.
A video on making "Shower Steamers" popped up in my facebook feed and I was interested - a new way to get a zing of aromatherapy!
These are super easy and don't take much time or equipment.

Here's the link I used - from HGTV.

You mix baking soda and water and press into muffin tins lined with paper liners.
Then you bake them, and let them cool, loosen the paper liners,
and add your oils before you pack them up. 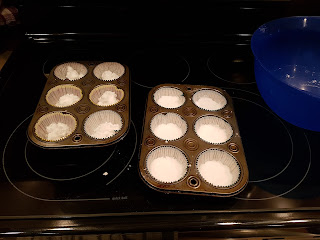 I had some trouble getting some of the liners off the tablets.
Some popped right out, and some did not. 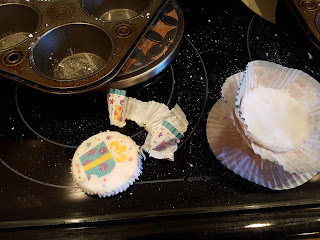 I did 6 peppermint (my favorite oil) and eucalyptus, 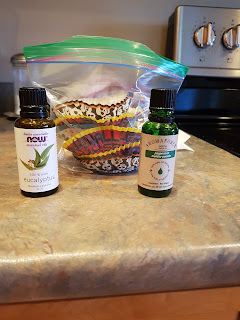 And 6 lemon and lime.  3 drops of each oil per disc for both. 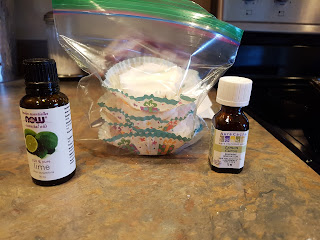 The Mister tried one the morning I made them and really enjoyed it.  My nose does not always work well anymore, so I didn't find it very scenty.  And of course, the longer they sit, the more scent they lose.  But - PRO TIP - just add another couple of drops to one right before you get in the shower and POW - smell city.
Posted by Sara at Wednesday, May 02, 2018