The photo below is hideous, even by my standards, but I can't resist sharing this cute little treat with you. 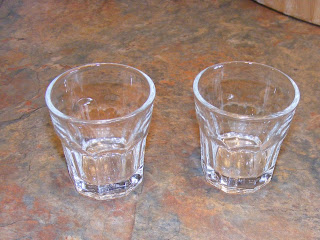 I picked up a set of cheap shot glasses last month and waited for inspiration to strike. It only took a week or so until I found a recipe in a 70's cookbook for vanilla pudding and whipped cream layered together in parfait glasses. That didn't appeal to me but when I found a chocolate pudding cup in the pantry I decided to make some my own shot glass parfaits on the fly.

This recipe probably could not be more processed, but what the hell. How much pudding and cool whip can you fit in a shot glass? Not much really. The amounts below made 4 small shot glass parfaits, but it would have made 3 nice full ones. Oh well, next time. 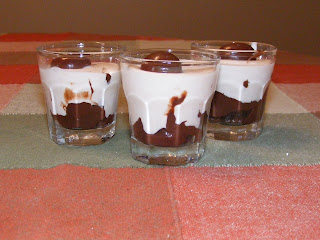 Stir the whip topping and rum extract together in a small bowl. Divide the pudding in half and divide one half of the pudding between 3 or 4 shot glasses. Top with half the whip topping. Layer with the remaining pudding and topping. (I didn't do a good job of layering and the cool whip covered the top layer of pudding, but there are 2 layers of pud in there. Promise.) Chill until ready to eat.

Top each shot with a chocolate covered almond. Mine were purchased from a teenager raising money for his church group to go to South America. That means there are no calories or fat in the almonds and if I happen to eat the rest of the box while Scott is not looking, nothing bad will happen to me.
Posted by Sara at Thursday, June 11, 2009

I like those glasses too. I'm a complete sucker for odds and ends for the kitchen/dining room. So much so that I've realised our house is too small for the amount I've accumulated and will be doing a car boot sale in a few weeks time... The way I'm feeling right now the whole lot can go and then I'll eat some pudding - straight from the bowl!!

I was kind of planning to do something like that but I'm thinking what to put in it. Your recipe sounds good.

a cool idea to make this in shot glasses (can't seem to spot the hideous picture though!), it looks real good.