how to cook dumplings

When we lived in Calgary, we would occasionally go to a restaurant in Chinatown that had THE BEST dumplings.  They were tender on top and super crisp on the bottom and were served with a few sauces, and they were just the best thing to eat for any occasion.

For years I've been cooking dumplings at home and while they are always good, I could never get them to come out with the same soft on top and crisp on the bottom texture that I remembered from the Calgary dumplings so many years ago.

Recently I was watching Ye Ole Tickey-Toks and  BOOM!  Right there was a video on how to make the perfect dumplings; the dumplings of my dreams.

Go visit Eastswithvan on Tik Tok to see her video, but the basic instruction is - don't mess around with them in the pan.

I always just dumped them in the pan with some oil, and then tossed and moved them around a bunch before I threw in some water for steaming.  Wrong wrong wrong.  Get them in the pan and then leave them alone!  Who knew.  Probably lots of people, but not me.

Here's what I learned -

Put a bit of oil in the non stick pan.  Heat it over medium heat.  Put your dumplings in the pan, flat bottom side down.  Fan them, very close to each other, in a circle.  Cook, not touching the dumplings, but maybe rotating the pan on the burner if you have a stupid stove where the burners heat unevenly, like we do.  Cook them for 5 minutes, making sure they don't get too brown.  Add "some" water, and cover and steam for 5 more minutes.  Remove the lid and if there is still water in the pan, keep cooking, again making sure the bottoms aren't getting too brown, until nearly all the water has evaporated.

Remember to watch your heat, you don't want your dumplings getting too brown and crisp too quickly.

Now this part I'm still working on as I've only done this twice!  You mix some more water and a spoon (?) of flour.  Whisk together and pour around the dumplings.  Then you cook THIS another 5 minutes until the slurry and the dumplings are nice and browned and crisp on the bottom.  Try, if you can, to loosen the edges with a spatula and then flip the whole thing over onto a plate so the bottom is now the top.  Like this. 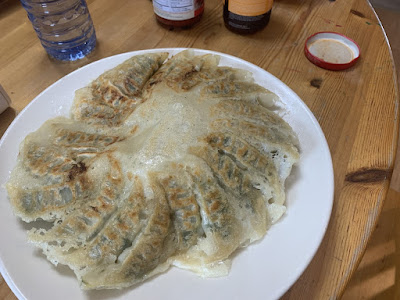 They could have been a little browner, but I was nervous.

The second time I made them I did get them a bit browner but my flipping game was NOT on point and they didn't come out in one layer.  But they still tasted delicious. 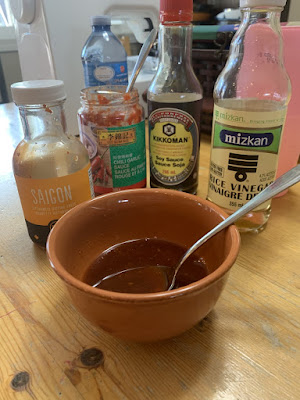 I put out the Saigon dipping sauce, some chile garlic sauce, and soy sauce as choices for dipping sauces, and then I tried to make a dipping sauce but it didn't taste very good.

ALSO, between Dumplings 1 and Dumplings 2 I bought a bottle of red vinegar (not red wine vinegar) for dipping and oh boy.  So good.

Go check out Eatswithvan for the BEST way to cook dumplings.