AGAIN with the caramel! Caramel Cake with Caramelized Butter Frosting

This month the Daring Bakers have careened back into the sweet lane in a big way. Our project this month was a Caramel Cake with Caramelized Butter Frosting. AIEEEE! Caramel again. Caramel frustrates me. And I'll admit that in this recipe (which I will link to at the end of the post) the caramel scared me a little too. Not only making caramel, but making a dark caramel (there is a fine line between dark caramel and burned caramel, trust me!) and then adding water to it? Yikes.

I made the cake over 2 days. The first day in the morning I made the caramel. The recipe calls for you to use a small pot with tall sides. I used my largest pot, to try to prevent any spattering when the water was added. On the Daring Baker private blog, someone mentioned that they covered their pot with foil and poured the water thru a small hole in the top. Because I was already nervous I decided to try that too. 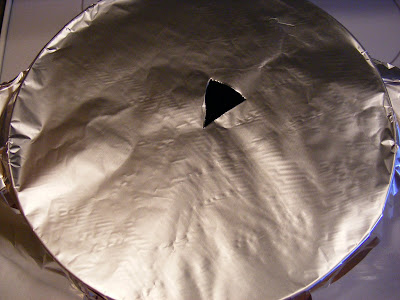 Thank you to whomever suggested that!

20 seconds after I took that picture, our camera died.

I cooked the sugar and water over medium heat until it was a dark(ish) color. I cooked it without stirring, which I believe is the correct way. When we were happy (and getting worried about burning it) with the color, the foil lid went on, and we slowly poured in the water. Holy cow. Again, thanks to the person who suggested the foil. It sounded pretty vicious under there. We continued to cook the caramel until it felt sticky. Then it came off the heat and was set aside to cool.

I had originally planned to only make the caramel on the first day, so I could get some other chores and errands done. But after the caramel had cooled for a while, I noticed that it was getting thick. Really, really thick, to the point where it was not pourable. Did we cook it too long? I don't know, but I knew that if I didn't make the cake then, and if that caramel got any harder it would be unusable, and I wouldn't have another chance to make the cake before the posting date. So I changed my plans and made the cake. The caramel was very stiff, and I was pretty sure I had ruined the cake. I had to cook the cake, covered with foil, for an extra 15 minutes to get it cooked through. The edges got a little crisp, but mmmmmmm, it tasted good.

I let the cake cool overnight, and made the frosting the next day. The frosting is a brown butter frosting, with powdered sugar and salt and thinned with cream or caramel. I was right in my caramel assumption, it was hard as a rock. So I used milk in my frosting. This frosting may be the best frosting I've ever had! I made only a half batch of it, which I found was more than enough for the cake. If there had been any more of it, I would have sat down with a spoon and eaten it all. But that would be wrong.

When I had taken the cake out of the oven the day before I had cut off a little corner of the cake to make sure it hadn't over baked and that I hadn't wrecked it with the firm caramel, I'd made the cake uneven. So before frosting Scott trimmed off one side of the cake. While I was watching him frost the cake, I broke off a little piece, added a dollop of frosting and wow. One of the best cakes I've ever made. I frosted a little piece for Scott and he stopped work on the cake so we could sit down and share the rest of the trimmings. The smoky sweetness of the caramel in the cake with the sweet-salty frosting is truly delicious. 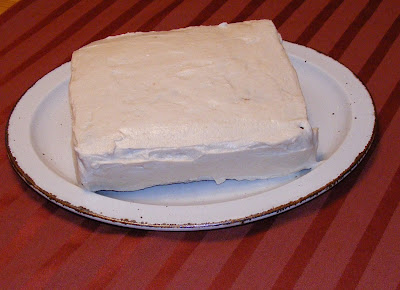 I had planned to take some photos of the cake sliced up, but after we'd gobbled down the scraps in 2 seconds, I knew that would be a bad idea. The cake was left whole until the next day when it was divided up into containers to dole out to my tasters.

Ciao ! The sqare cake is nice ! I liked the caramel,salt and brown sugar taste but next time I'll cut the sugar content !

I had trouble with the caramel, too but unfortunately, my cake didn't have that smoky sweetness you're talking about. (Sigh.)

Nicely done on this challenging challenge!

What? There's something wrong with eating that frosting with a spoon? Umm... oops... Your cake looks wonderful, and I'm in awe of your willpower!

Way to go, my love!! I used the foil with the hole too.. thank goodness for that tip, bless that Daring Baker's heart :)

Glad you showed restraint.. wish I did. :( How'd your tasters like it?

And yes wow! A person could get lost in that frosting and a spoon, you add the cake and you're in serious trouble!
Like the square cake!!

The cake looks great. I love the square shape!

I had very similar experiences, I definitely used the aluminum foil trick but my caramel still turned rock hard. I did manage to get it into the icing but only barely. Still though - so fabulous!

Caramel is such a tricky thing. I don't know why some had rock hard caramel and some didn't. Mine came out like a nice maple syrup. The frosting was terrific. Nice choice with the square cake.

Great job with the square caramel cake. Sorry about your camera.

It really was wonderful, wasn't it?
I couldn't stop picking at it either.
The foil was a good idea, I didn't know about that.
Congrats on another challenge well done.
Cheers!

Your cake looks great. I like the foil idea, I didn't see that on the forums. I will try that next time.

Should've tried that trick with the foil. I had gloves on but the sputtering still made it to my floor and big toe.

Grazie Sara ! Can I post an appetizer anytime before the 30th or wait that day?

Great job! Yes, it qualfies for me as one of my best cakes too.

natalia, i sent you an email.

This was was a little scary to contemplate, but you did beautifully. I'm glad that in the end it turned out swell and that you snook some well deserved tastes!

Yay...a square challenge...one of the first squares I've seen. The foil idea is neat. The frosting was definitely very addictive...sppon wouldn't stay away!!

That foil idea saved my day as well! And I´m glad that you loved the cake even with the little bumps you had along the way. Besides, that only means you are going to have to try it again and again ;)

That foil idea is awesome!! - that cake was yummy, no wonder it didn't last :)

I loved the icing too. Luckily I only made half as well otherwise I would have been spreading it on biscuits and going nuts!

Good job! Your cake looks very rustic. It is a delicious flavour isn't it??

Your cake sounds wonderful! Sorry to hear about your camera.

I really enjoyed this challenge. Too bad about your camera. I agree about the icing...it was DELICIOUS!

Sounds amazing! I love the trick with the hole in the tin foil. Cool!

Yes, cake scraps with extra frosting can be even better than eating whole cake slices! I like the square cake--super cute!

Ooh the foil looks like a good idea. I went with oven mitts on my hand and very log sleeves on my arms, just in case. I think using the milk was a good idea, it cut down on the sweetness and would bring out the flavor of the browned butter.

Great job on this challenge! I wish I would have seen that trick with the foil!

Congrats on the gorgeous cake! My caramel was quite thick too, but still pourable. I liked it that way because the caramel flavour was more concentrated.

I'm so glad that you stood up to the "caramel challenge" on this one -- and that you enjoyed the end result. Thanks for baking with us.