When we had my Nana's funeral many many years ago, and her little house was being emptied to be sold, the family had an afternoon where we discussed who would receive what mementos from the house.

I held back from speaking up too much - I lived the farthest away and had seen her the least over the years, and I didn't want to step on any family member toes by trying to claim things they might have wanted themselves.  Besides, the things that I really would have loved were either already spoken for - her little mantle clock - or long gone - her brush and mirror set that she kept on her dresser hadn't been around for years, and her super cool retro dishes that made me think of lunches with her and my grandpa when I was a kid had long been replaced.

I did of course get some lovely things, and one of the most treasured has become her yellow bowl. 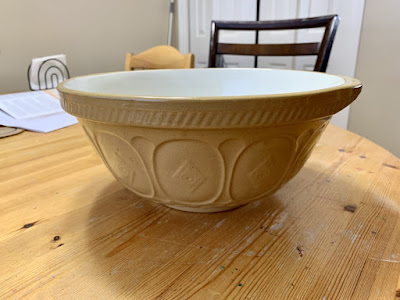 The funny thing about the bowl is that I don't ever recall seeing her use it!  She wasn't much of a baker and meals she cooked were pretty straightforward meat and potatoes.  Perhaps it was used for big family dinners, but us kids were banished from her small kitchen to keep us from getting in the way. 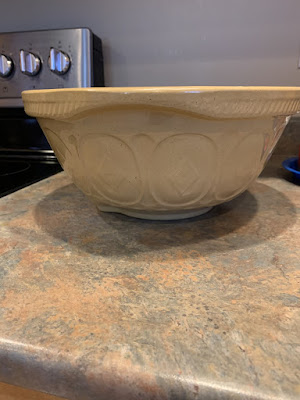 I brought it back to our house in Calgary and it lived on a shelf, unused, until we moved to BC, where it lived up above the kitchen cupboards where I could see it every time I walked in the kitchen but it wasn't easily accessible and remained unused.  When we did a big kitchen cleanup/clean-out last year it came down from its shelf to be washed, and I wondered what I was saving the bowl for, and why I wasn't using it now.

So I made room on my bowl shelf and now it has become one of my most often used bowls. 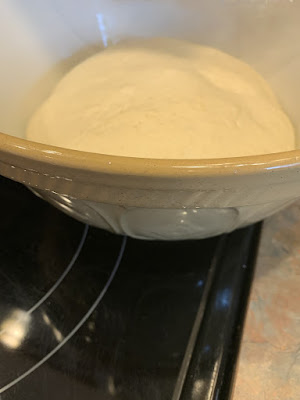 It's quite large and a good size for bread doughs or meatloafs, and it has a flat spot on one side so you can have it tilted on the counter, if you needed to. 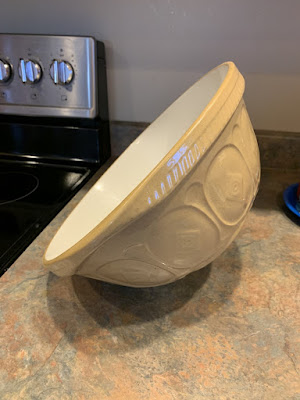 So I use it to make meatloaf, and bread dough.  Muffins and pancakes.  Cookies.  And I think about my Nana and her little kitchen, and her daughter - my Mom - and how much I love and miss them both. 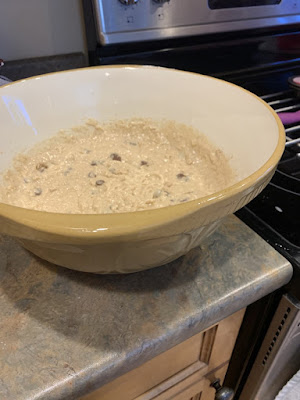 The stamp on the bottom of the bowl reads -

The "Gripstand"
Mixing Bowl
T. G. Green & Co Ltd.
Church Gresley
Made in England
Patent No - (the patent number is worn off) 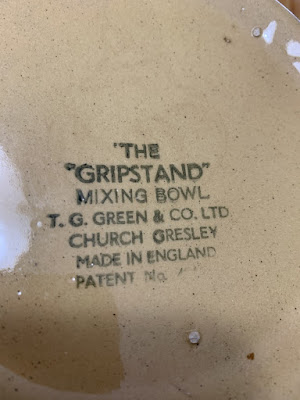 A quick google search showed me that the bowl is from a popular brand and were produced from 1906 to 2007.  The company started in the small village Church Gresley, and the style is called pressed yellow ware and was sold worldwide.
Here's an article I found, and here is a facebook page about the pottery as well.