I asked The Mister what kind of cake he wanted for his birthday and after much consideration he was torn between a black forest cake and "I don't care, you pick".

Of course I wanted him to have whatever cake he wanted for his birthday, but I am not the biggest chocolate cake fan, I've never made a black forest cake before, and they are multilayered, meaning a big cake, which we really don't need.

I did some googling, thinking I could maybe find a recipe for individual cakes or another twist on the dessert and indeed I found the most perfect twist - a tart!

For the tart dough I used this recipe from Tasty, and for the rest I just did what I wanted to.

Since BFC's are usually finished with chocolate shavings or what have you, I wanted to add more chocolate than just the crust.  I first thought I might melt some chocolate and cover the tart bottom and sides with it, but then I worried it might be too difficult to eat, trying to get your fork through a layer of hardened chocolate.  So instead I whizzed chocolate chips in the food processor down to a powder, and sprinkled that over the tart shell. 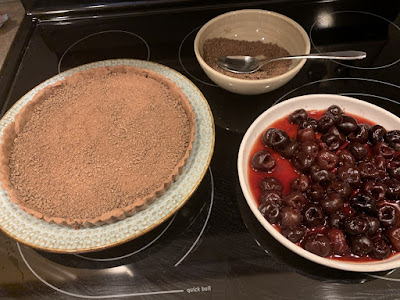 For the cherries, I used frozen ones from Costco, which I like to have in the freezer for smoothies or to sprinkle over yogurt.  I thawed them out for a few hours before assembly.

The kids had wandered in "to help" but most of their help was asking when I was going to make the whipped cream so they could have some, and telling me that the cherries looked bad and they didn't want to eat that part.  So helpful. 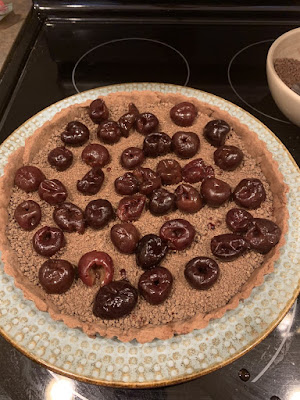 I had planned to put more cherries than this on, but I was getting tired of listening to the kids telling me how bad it looked and they wanted pieces without cherries.

Then I whipped the cream with some sugar and vanilla, and plopped it on top to cover the cherries from my childrens view. 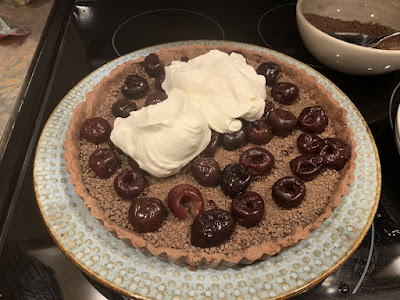 My smallest helper and loudest critic stepped up at this point to sprinkle more chocolate over the top, or just dump it by spoonfuls in the same spot over and over. 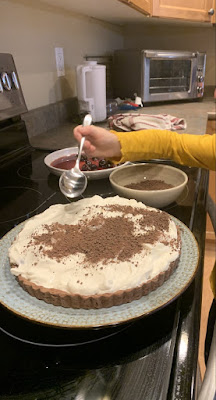 Lots of whipped cream, chocolate and cherries - what a dessert!  Super easy and super delicious. 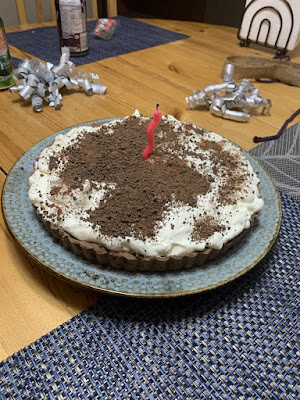