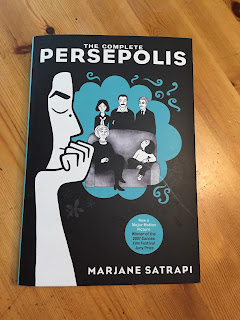 "I turned around to see them one last time.
It would have been better to just go."

"But let's be fair.  If women faced prison because they refused to wear the veil, it was
also forbidden for men to wear neckties (that dreaded symbol of the west),
and if a woman's hair got men excited, the same thing could be said
of mens bare arms, and so wearing short sleeved shirts was also forbidden."

"I finally understood what my Grandmother meant - if I wasn't comfortable with myself,
I would never be comfortable."

"At one of the demonstrations, a German journalist took a photo of my mother.  I was really proud of her.  Her photo was published in all the European newspapers.  And even one magazine in Iran.
My mother was really scared.  She dyed her hair, and wore dark glasses for a long time."