I had my eye on this recipe for bacon cheesecake for a while, but I was hesitant to make them. On one hand - bacon? cheesecake? really? On the other - when has bacon ever let us down?

I made them for my boss' birthday and they were a huge hit. The cheesecake itself is quite nice, but the candied bacon just throws it over the top and makes them beyond amazing. I am not kidding. 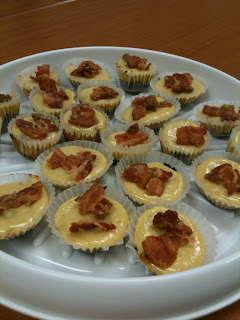 I made them for my mother in laws birthday as well. I left a few bare in case the idea of bacon on cheesecake was too weird for the family. 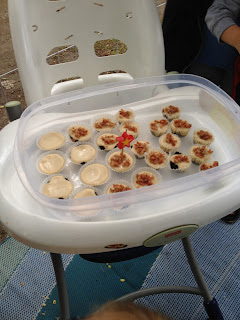 It wasn't, and they were devoured by all, including the kids, although Pax wasn't super enthusiastic, and stopped after one. He was the only one.

My only adjustment to this recipe the second time around was to chop the bacon coarsely rather
than have large pieces on top of each 'cake.