I am not afraid of kale anymore.

I like kale, but other than this soup I have no idea what to do with it. And though that soup is fabulous (and it really is, and you should make some soon), there's only so much of it I can eat. Which is unfortunate, because this spring I planted 3 kale plants in the garden, and they've gone crazy. I deleted my early garden pictures by accident, but compare this picture which was taken at the end of July with this one below and you can see how fast it grows. I feared if I didn't start cutting some off soon it might invade the house. 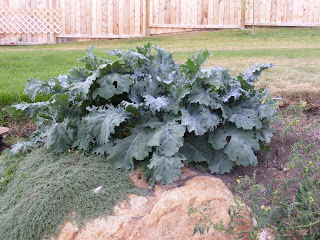 When we were at the market on Saturday one of the vendors had some recipe sheets out and I grabbed a couple. I was thrilled to see a handful of kale recipes and a couple that looked darn tasty. I played around with one recipe last night and was so happy with the results. It's a cheesy baked kale, not too much unlike my yummy creamed spinach, except not nearly as good for you. Well the kale is good for you, but the sauce is not. But it is so creamy and cheesy and delicious. This recipe doesn't make a lot, but you don't need a ton either. It would serve 2 to 4 people, or 1 Scott.

Remove the stems of the kale before weighing, so you have 1/2 pound de-stemmed. Wash well. Bring a large pot of water to the boil, and cook the kale, covered and stirring often for 15 minutes. Drain and rinse with cool water. Squish the kale with your hands to remove the excess water (like with spinach), and then chop the kale. Set aside.

While the kale is cooking, heat 1 tb butter in a small pan. Add the bread crumbs and cook until golden brown. Remove from heat and set aside.

Melt the remaining 1 tb of butter in a small pan. Add the flour and cook, stirring, for 2 minutes. Add the vegetable broth and stir or whisk until smooth. Bring to a gentle simmer and cook until it is thick. Stir in half (1/4 cup) of the cheese. Season with salt, pepper, nutmeg and hot sauce to taste. Stir in the chopped kale and mix well. 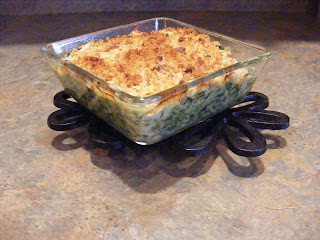 Pour the kale into a small baking dish sprayed with non stick spray (I think mine is about 4X4, but it's upstairs and I'm downstairs and it's too far away to check). Sprinkle with half of the remaining cheese, and half the bread crumbs. Then add the rest of the cheese and top with the last of the crumbs. Bake at 425' for 10 minutes, or until the crumbs are nice and crisp and brown. 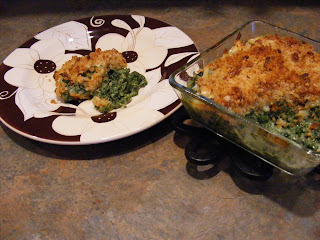 I've never had kale before, but this is making me want to go out and find some!

deborah, it is so great. if you lived closer i'd mail you some kale! ;)

Does it taste like creamed spinach? I've always been sort of afraid of kale too. Coming from the banquet business I think of kale as something you line a food bar with but it has phenomenal nutrition in it so I don't know why it's always only used as a garnish.

I know that all the greens are rich in vitamins and very good for you...but I do like to disguise them with sauces and cheese like this dish:D

glenna - this dish tastes just like creamed spinach, probably because you chop it small. i always thought that kale had a strong taste, but maybe it was a different variety?

bv - yes, i think i have taken away all of kales good qualities with this dish.

Mmm..looks delicious! Have you tried kale chips? Spray with olive oil, bake until crispy, sprinkle with salt - they're strange at first, but really good!

Wow, I have never had Kale and was kind of scared by it as well. You showed me the light, especially since you said it tastes like creamed spinach, yum!

My first kale was out of Jeff Smiths Immigrant Ancestors book! Our cooking club did the Ethiopian dinner and there was a kale dish in that. It pretty much was my favorite dish that night and I'm no longer afraid to order it.

I have been wanting to use kale more and this looks like a tasty way to do so!

I trying my best to learn how to cook (decent meals :-) thanks for sharing your ideas. Busby SEO challenge

hey! I've got an excellent kale, chicken & dijon casserole recipe if you need more to use it up :)

hey! I've got an excellent kale, chicken & dijon casserole recipe if you need more to use it up :)