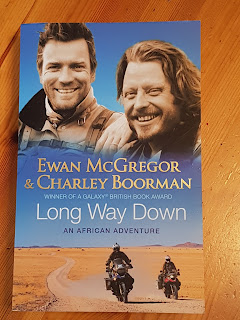 'Ewan was in Star Wars mode again. "Charley," he told me, "be mindful of your thoughts for they betray you." '

'I gazed the length of the stillness to low walls and the flat envelopes of the desert beyond. The place was beautifully kept with cactus growing in spiky flowers between the silent graves.'

'Time and again we had seen the effects of war and brutality on this trip, just as we had ridden along the Road of Bones in Russia.  We had spoken to mine victims in Ethiopia, child soldiers in Uganda.  Now here again we were in a country that had been ripped apart by war; the genocide of a million civilians that, as Kagame said, had achieved absolutely nothing.  But in each of these countries we also found hope for the future.'
Posted by Sara at Tuesday, May 16, 2017