The meatballs cook in the sauce!

The first week of my maternity leave is over and it wasn't quite as productive as I'd hoped. I'd made plans to get some stuff done before the baby arrives but due to issues with my blood pressure, I've been ordered to severely restrict my activities, and have pretty much been doing jack squat since Wednesday. There's been a lot of fidgeting, staring out the window, and watching a hell of a lot of food shows.

Yesterday morning I saw an old episode of Nigella Bites where on a rainy day she made pasta, meatballs and sauce from scratch. After my doctor appointment we stopped at the store and picked up what we needed for the meatballs and sauce.

I used the 2 recipes as guidelines instead of following them to the letter. The thing I most wanted from her recipe was that the meatballs are cooked in the sauce, rather than being fried or baked first. I love meatballs but hate making them at home. Cooking them right in the sauce makes so much sense. And by making the meatballs small, they cook fast. 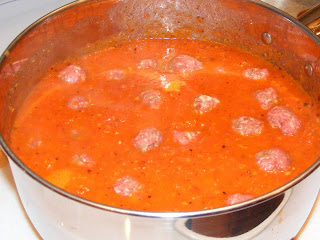 I used a large can of roma tomatos and a small can of fire roasted tomatos in place of the passata in the recipe. I whizzed the sauce smooth before adding the milk and meatballs for the final cooking. 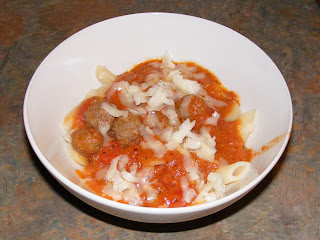 Thank you for sharing this! I have seen other recipes that cook meatballs right in the sauce and I don't know why, but it made me nervous. I will totally try this now.

Delicious as well as thrifty, this is a winning combination!