Two hits and a miss from Rachel Ray

Have I mentioned that I am struggling with food? Well not with food, exactly, but the cooking of food. I have little interest in spending time in the kitchen cooking, and even less interest in looking through cookbooks, magazines or online for interesting things to make. Looking at food and/or reading about food? Blah. That word describes many things in my life. If I'm not in my pajamas, eating fruit and watching What Not To Wear and/or re-reading a Harry Potter book, then it's Blah. Oh my, that looks sort of sad, what I just wrote.

Anyway! From time to time I have short spurts of food related energy, when I say to myself, stop making boring sandwiches and pasta and the same zucchini-onion-pepper stirfry! Grab a cookbook and find something new and exciting! One day I even got myself so worked up that I'd decided to do one of those cook thru the book things (like I failed at last year!), but once I discarded the recipes containing booze, uncooked eggs, peanuts, certain cheeses and everything else I shouldn't eat, plus the ones I wouldn't eat (salmon, veal), there were like 4 recipe left, and what's the point.

So I've been reading a lot of Rachel Ray magazines. My Dad and I have an arrangement - he buys the magazine, reads it and cooks whatever out of it, then he passes them to me. I do the same thing and then store them so should either of us want to revisit an old issue, there it is. I like the magazine quite a lot and almost everything we've tried in the past has been a success. I'm trying to strike a balance between finding recipes that appeal to me and recipes that I have some or all ingredients on had for, like today's first recipe,

We had company at the end of last month and in preparation I bought a jumbo container of pretzels for snacking. No one touched them but me and although pretzels have been my friend and constant companion the past few months I was more than willing to sacrifice some of them for the recipe. I also had some chicken in the freezer, so all I needed to buy was zucchini. I am a huge, huge zucchini fan, and I love me some zucchini sticks. This dinner was easy to put together and tasted very nice. The zuke sticks were my favorite part and I will make them (and most likely the chicken) again. 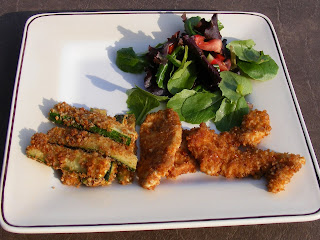 Up next is a BLT Salad, also something I love. The one in the magazine is made with arugula and nuts, but I had spinach and no nuts so I went with that. I also had bacon in the freezer and tomatos on the counter so I had to buy nothing to make this dinner. I love when that happens. In the magazine this was served in endive leaves, but we just used bowls and a sprinkle of parmesan. I loved the mustard in the dressing - this salad is a real winner - easy and good. I was about to type that you don't have to turn on any appliances to make it but that's not true. Unless you buy pre-cooked bacon. But you could always microwave the bacon, avoiding the stove on hot hot days. 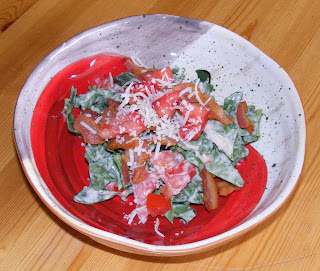 The last one is a miss that was pretty spectacular - Plantain Hush Puppies. I've been wanting to try a plantain for a long time but never knew what to do with them. I figured this recipe would be an easy introduction, paired with corn, and the dipping sauces sounded pretty yummy. Well the mixture came together fast, we dolloped it into the oil and...yikes. They just disintegrated into mush. There was no saving the first batch. Checked the oil temperature....it was good....second batch, same as the first. I was getting ready to switch gears and pan fry the rest of them, but when Scott tasted a little of the batter and immediately spat it into the sink....we turned to sandwiches and salad for dinner. And tried our best to ignore the pan full of oily yellow goo on the stove.

I'm disappointed it didn't turn out. Did I do something wrong - was it my corn? My plantain? I don't know. Anyone out there tried this one? I hate kitchen failures.

I LOVE the look of that salad! Zucchini is def not my favorite, but those do look good. I have no experience with plantains, so I can't help, sorry!

I hate kitchen failures too.

I love plaintains. Ever had Mofongo. Perhaps try baking them???

i will try plantains again. at a later date.

Nice to see you cooking again!
For my first baby I ate a lot of grapefruits (for some reason they had to be peeled whole like an orange) and had a few weeks of maple glazed donut eating...
Funny what we crave.
Maybe your plantains were too ripe? The only frying recipes that I have used required the firm, green ones.
I have never tried an RR recipe, good to know they are successful.

natashya, yeah, they could have been too ripe i had them for about a week before i used them.

Gosh I really like the idea of the pretzel crust on the chicken and the zucchini!

Saw you on ERR blog, that BLT salad and pretzal chicken sound terrific. I too like to cook Rachael Ray recipes. Nice to meet you. Lovely blog.