I guess there was a sale on 80 page red notebooks that day. 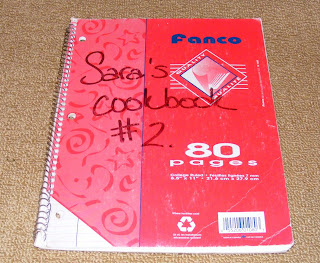 And again I must have been desperate for paper while this book was being worked on; it's only got 32 pages of recipes. This one is all over the place - meatloaf, apple pie, pickles, and even some crafts wormed their way in here - soap, candles, pillow patterns, and how to make little stuffed snowmen out of athletic socks. My old friends bread recipe is in this one too - I remember making bread with her and being in awe of how easy she made it look. 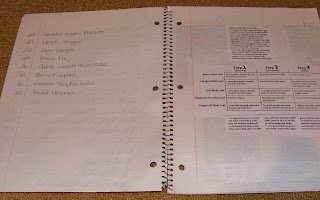 I chose for my recipe from Book Two a recipe for Vietnamese Pho Soup. I recently saw something on TV that said the correct way to pronounce Pho is Fuh. I've always said Fo, like So. Who knew?
The reason I chose this recipe is because I desperately miss the Vietnamese restaurants in Calgary. Kamloops has lots of great restaurants - we found a place in the fall that has a small Korean section on their menu and we tried bimibap for the first time. Yum! But it's not the same. I miss it. 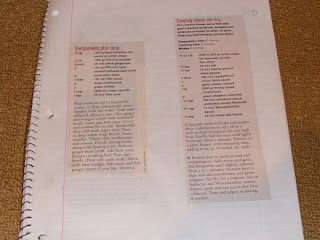 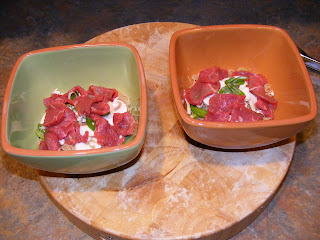 Remove the ginger from the broth, add some lime juice and bring to a hard boil. Then pour the boiling broth into your bowls. The broth will cook the beef. 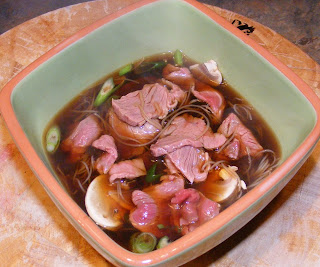 Add some hot sauce and bean sprouts. Grab a spoon (for the broth) a fork (for the noodles) and a napkin (for your chin). 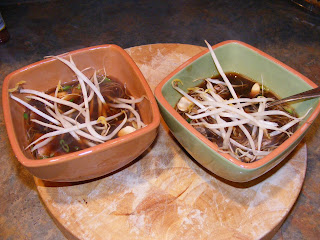 We really, really liked this. I'll make this again, although I'll make a couple of changes. If you look at the second to last picture you can see the super thin noodles. They were too thin for my liking. I'd want a slightly thicker noodle next time. I'd also jazz up the broth a little more - maybe some garlic, and more recent Pho recipes I've seen have included seasonings like peppercorns and cloves.

Over all, this is a fun, easy and cheap dinner. The recipe below serves 4, with 125 grams of beef! Did I already say Cheap?

Place the steak on a plate and put in the freezer for 15 minutes. This will firm the meat and make it easier to cut thinly.
Put the noodles in a large bowl and cover with lots of boiling water. Let sit until softened, 15 minutes or so, then drain and set aside.
Bring the beef broth and water to a boil. Slice the ginger into rounds and add to the broth with the soy sauce or fish sauce. Cover and simmer over medium heat for 10 minutes.
Slice the beef as thin as you possibly can. Thinly slice the mushrooms and green onions.
Divide the noodles between 4 soup bowls. Top with the mushrooms and green onions, and then the beef.
Remove the ginger rounds from the broth. Turn the heat up to high and stir in the lime juice. Bring the broth to a rolling boil, and then pour the broth into the soup bowls. The broth will cook the beef. Top each bowl with some bean sprouts, and serve with lime wedges and hot sauce on the side.

I love notebooks...with recipes, crafts, reminders, scribbled in them. I'm very...intriqued, impressed with your notebooks. There is something special when you can hold a notebook like that in your hand.
Blogging is great, don't get me wrong... I just love the whole notebook approach.

i love pho and i do love the taste of cloves or chinese five spice in the broth. i've never made my own tho. this definitely seems easy enough!

Sounds delicious. Makes me think about that fish sauce I bought a few months back and didn't know what to do with. :)

Debbie - you are right, there is something very special about recipe books. I adore mine and don't plan on ever stopping.

KP - YOU would make such good homemade pho!

Annie - although I like fish sauce i never have luck when i buy it myself. i always sub soy sauce instead.

Wow - sounds great! I need to try this - I even have the fish sauce!

Sara this seems grand from technique to eating! I'll add some garlic for sure.
Wonderful history your book has cooked in it.

I prefer the thicker noodles too. Unless I'm having Singapore Noodles.