the end of the garden, and a recipe for broccoli

We pulled out most of the garden yesterday, and overall, it was pretty disappointing. We aren't able to dig out an area of grass to put in a garden (due to underground sprinklers), so we planted our veggies in the existing flower garden. 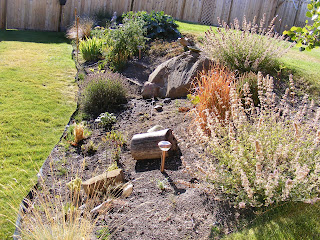 You may remember we had a fair amount of success with our garden last year in Calgary. I was certain that this year would blow that away, Kamloops has generally better weather than Calgary. It wasn't, but there were 3 reasons - a late spring, some extremely hot weather, and not really great soil. So this was a learning year, I need better soil and a little more water for next year.

Total failures included: lettuce (which was first attacked by caterpillars, and then the heat killed it), squash plant, watermelon, many basil plants, mint, fennel, zucchini. Partial successes came from: rhubarb plant (looks pretty bad but is hanging in there), raspberry bushes (this is their first year so they haven't produced yet, hopefully they will survive the winter), celery (grew nicely but is quite tough), the rest of the herbs (hung in there but never produced much), and potatos.

The winners in the garden were the tomato plants and the kale. If there is anyone out there who lives in Kamloops who would like some kale, email me. Seriously. There is so much kale I don't know what to do. I am going to have to start leaving it on peoples doorsteps.

This tomato plant has given us a lot of tomatos this year, and has looked half dead the whole time. I am pretty sure it's on its last legs now. 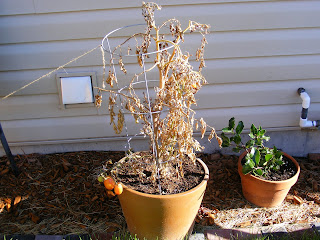 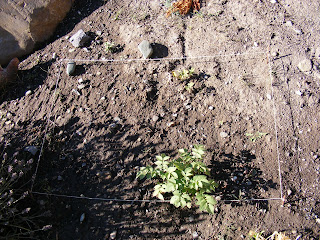 2 heirloom tomato plants. They were late bloomers but now have many green, although small, tomatos. 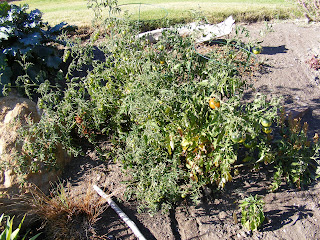 The kale. It grows even as we speak. 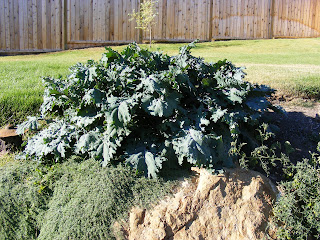 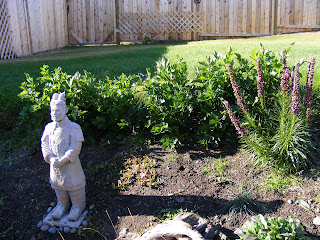 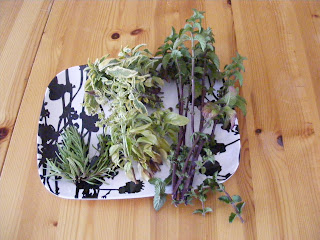 Our potato harvest. That's all of them, and that's as big as they got. 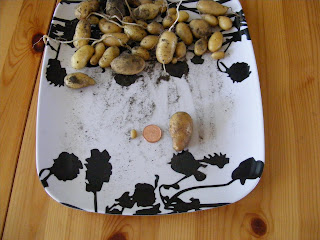 I found a copy of the Christmas 2007 Bon Appetit in my magazine rack last week. I pulled out a couple of recipes to try, and one looked like it would go with the schnitzel I was making for dinner on Saturday night. It was easy to make ahead and was delicious. 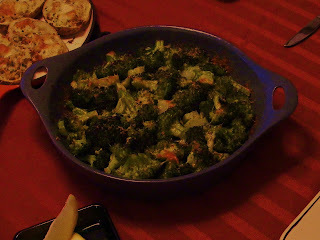 I used half the amount of broccoli as there were 4 of us. I cut back the butter to 2 tb, and sprayed the dish with nonstick spray instead of buttering it. I also used 1/2 cup of grated Parmesan cheese. It was a great dish, only lightly cheesey so the broccoli could really shine through. Next time, I'm adding garlic!
Posted by Sara at Monday, September 08, 2008

It seems every year is a learning year for us. I'm always interested in trying the same plant in different locations and finding it will perform very differently.

The broccoli sounds good but yes, I'd always be adding garlic!

I feel your pain. I have the worst yard for growing anything. First of all, it's way to shady and secondly I have a very hungry ground hog, deer and rabbits.
The ground hog is the worst. I can't even plant flowers, he eats them all.
The only flower he will not eat is begonias, so that is what I plant now.

Its tough to have a bad season--we had such a terrible drought last year that I didn't even bother planting this year. Hopefully next..

*I haven't forgotten about you and the kaolin, just haven't had a chance to run up there yet...soon!

The good thing is that now you can start preparing for next year's garden! We have found that the most effective thing for us has been the compost we till into the soil at the end of the fall. And you can start thinking of what you want next year!!

My garden is still hanging on here in California, although my zucchini and tomatoes didn't do nearly as well as I'd hoped.