del.icio.us recipe of the week - my take on Michelles Beanapaloosa

This is possibly the fastest that a del.icio.us recipe of the week has made it from computer to plate - the same day. I saw this recipe on Tuesday morning before I left for work, picked up what I needed from the store at lunch, and made it that night for dinner.

When we packed up our house in Calgary to move here, cleaning out my pantry was the hardest part for me. I gave away a fair amount of spices, sauces etc, but some stuff I just couldn't part with, and a jar of garlic black bean sauce was one of the things that came with us. But what to do with it? No idea, which is why it was still in the pantry unopened until my Tuesday morning visit to Je Mange la Ville, where I found her Chicken and Green Bean stir fry.

Doesn't it look and sound delicious??? Or del.icio.us (ha! sorry.). Yes it does. But when I was at the grocery store I had a change of heart. We've eaten a lot of chicken lately, to the point I don't want to eat chicken again any time soon. Maybe I should save the recipe, and make something else tonight. OR, I could make a switch and use beef instead of chicken! Am I brilliant, or what? 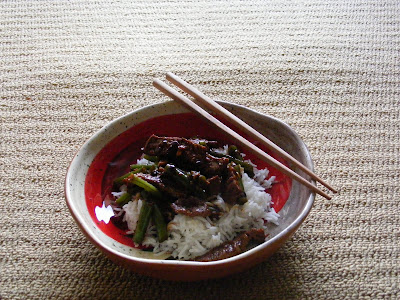 This was ohmygod good. As I said, I used beef instead of chicken. I also used about 1/2 lb each of the beef and the beans - I am trying to cut down on leftovers around here - but left the sauce amounts the same, as we do love sauce. Scott was pretty uninterested in this when I started cooking it, but practically knocked me out of the way to get at it when it was done, then ate 3/4's of it, and said that anytime I wanted to make that again, it was ok with him.

The only thing I would do differently next time would be to cut back on the amount of garlic I used. Michelle's recipe calls for fermented black beans, and I used garlic black bean sauce. As fabulous as it was, I swear we radiated garlic out of our pores for the next two days.

del.icio.us recipe update, as of today 267 recipes. After I hit 300 in May I had to go through and delete recipes I knew that there was little chance I would actually make. And then I severely cut down on how many recipes I added to del.icio.us during the summer. Instead I just bookmarked them to my favorites, or wrote them out instead. So I really got ahead there.
Posted by Sara at Sunday, August 24, 2008

Nice recipe! I LOVE fermented black beans, but there are only so many things I can make with them.

I've been there - radiating the garlic...
Recipe looks great! We're starting to eat rather weird around here - cleaning out the pantry before a move.... So I know how that goes, too ;-))

Oh, awesome! Glad you liked it and played around with it. Next, I am thinking of trying shrimp and broccoli...

Beef sounds really good and glad it works with garlic black bean sauce as I did get some of that as a back up for if I couldn't find fermented black beans!

You are so good! I have no self control, and have over 1000 on my del.icio.us. I should really start making one a week. This one sounds delicious!