That Cookbook Thing. Cooking with friends and Julia Child.

Back in January I took part in a group review of a cookbook with some blog friends. We had so much fun, Mike thought we should do a similar group project on one of the classic cookbooks of all time, one of my heroes, Julia Child's Mastering the Art of French Cooking.

There are 6 of us - Moi, Mike, Ruth, my great friend Mary, Deborah, and Mike's friend and new blogger, another Mary.

Over the next few months we'll be cooking some classic Julia dishes that we all had a hand in choosing. Our first recipe is Onion Soup.

Onion soup has got to be my favorite soup. When it's done properly it's a thing of beauty to be savored and write songs about. When it's done poorly nothing sucks more. But when it's good, awwww yeah. I've pretty much given up ordering onion soup when I eat out. At home I'm torn between 2 onion soup recipes, this Julia recipe and this one.

Julia's soup takes about 2 hours to make, but of course it's totally worth it. My Mom gave me the cute little bowls you see below, but I'm not sure if they're safe to put under the broiler. So once the bread and cheese were added (I used toasted pieces of the french sourdough we bought in Salmon Arm ) I baked them until the cheese melted, and then instead of broiling to brown the cheese, I sprinkled it with a little Parmesan instead. The recipe also called for you to stir a bit of chopped cheese into the bowls before topping with the bread and cheese. I'd never done that before, and I don't know if I'd do it again. It made the soup really really really cheesy. Scott loved it, of course. We had an option to go all the way with this recipe - make Soupe Gratineedes Trois Gourmandes - which, after you have broiled the soup, you whisk together cornstarch, and egg yolk, Worcestershire, and more cognac, then lift up the baked cheese crust and stir this in. I didn't do that, but heard that it is pretty darn good.
Look for a short re-cap of all our soups over at Mike's soon. 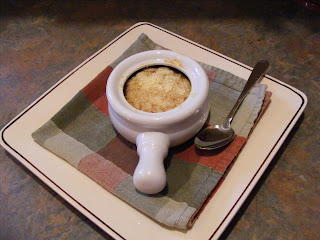 Soupe a l'Oignon Gratinee
Mastering the Art of French Cooking

Cook the onions slowly in butter and oil in a large, heavy bottom Dutch oven, covered for 15 minutes. Stir occasionally.
Uncover, raise heat to moderate and stir in salt and sugar. Cook for 30-40 minutes, stirring frequently, until the onions are an even, deep, golden brown. Sprinkle in the flour and stir for 3 minutes.
Take the pot off the heat and blend in the boiling liquid. Add the wine and season to taste. Simmer, partially covered for 30-40 minutes. Correct seasoning.
Preheat oven to 325'.
Pour soup into each bowl, stir in some Swiss or Parmesan cheese. Place a slice of French bread on top of the soup and top with grated cheese to cover the bread. Bake for 20 minutes and then under the broiler for a couple of minutes to brown the top a bit. Serve immediately.
Posted by Sara at Sunday, May 04, 2008

This has long been on my list to try! A delightful idea to be using some classic books to cook from!
I love onion soup! I'm sure Gorn would love the cheese and the cognac in it too.

Seriously...this was delicious, but definitely time consuming. It's one of those dishes we make to impress others,not for a quick supper after a hard day's work...unless you have leftovers
;-)

I love the soup bowl! See, that's reason enough to make this! It was time consuming, in that you need to be there for a few hours, but not really hard. It really is a great dish for friends because you can stop before the adding the cheese part and put it in the fridge. I did that on Saturday and finished the soup Sunday.

Thanks again for being a part of this crazy thing!

Mike, that's a great idea about fixing it ahead of time and putting it in the fridge. I'll have to try that next time.

Sara - I ADORE those soup bowls? Where can I get some?

Mmm, french onion soup...I love it so. This looks good and classic.

Deborah - sorry, she bought them from a local store. I bet you could find something similar though.

I haven't had french onion soup in such a long time. I miss it and yours looks and sounds fantastic!!

I love french onion soup. Yours looks great. I like the idea of adding worcestershire and cognac. I will try that next time I make it.

Sara, darling ~ Yeah, sometimes dishes are time consuming, but you have to think about the purpose of going to such lengths. I don't ever want to reach the end of the "I just wanted to feel comfortable" line. I think it is a wonderful idea to cook dishes from a classic cookbook and am jealous that I was not invite to participate - hint, hint :-p Great looking soup (and soup vessel!).