Farmers Market and Cheese! Glorious Cheese! And other stuff too.

So week 2 of the farmers market was slightly better than week 1. There were more vendors, but most of them were selling flowers and plants. We came away only with potatos and onions. 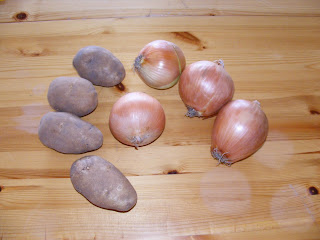 After the market we left town and drove to Salmon Arm, an hour East of Kamloops. When we lived in Calgary and drove out here for visits, we'd always stop at Gort's Gouda Cheese in Salmon Arm and load up on cheese. When we drove here in September we arrived in Salmon Arm after the store was closed, and we haven't been out that way since, so I was happy to visit again. We bought: 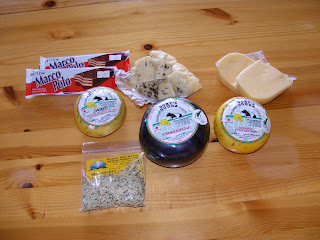 I'd been searching for soba noodles the past week but had no luck. When I saw a natural foods store in SA, I ran in and sure enough, they had a few varieties. I got spelt soba, because I don't think we've had spelt before. I also bought some Himalayan salt, Rogan Josh sauce, and lentils in a sauce. 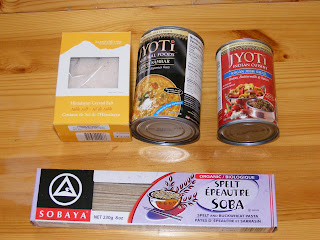 After we ate lunch we went for a walk and found a little bakery and bought a loaf of French sourdough bread. We also bought a nanaimo bar (only so-so) and a gingersnap cookie, which was fabulous. Neither made it back to the car. The cookie was just like the gingersnap cookies my mom made when I was little. Scott is planning on asking her for the recipe. Maybe she'll share it with you too! 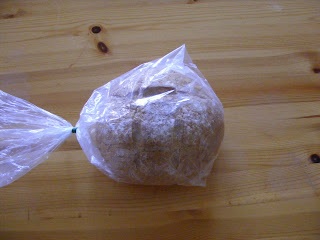 Then we stopped at 2 outdoor markets - Pedro Gonzales Fruit Stand, where we bought some Chicks and Hens and Strawberry plants, and my second favorite place in SA after Gort's, De Milles Farm Market. After we bought our food, 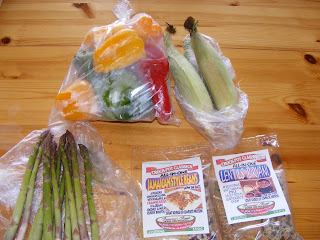 big bag of peppers ($2.50!), corn, asparagus (loose, which I've never seen before), and and two "meal in a bag" things, one lentil and one bean, we visited the animals at the farm. I spent most of our time there chastising myself for not bringing our camera. We saw HUGE hogs, little pigs, ducks, all different sorts of chickens, peacocks, ponys, goats, llamas, turkeys, cows, rabbits.....I'm sure I'm forgetting some. On our way out we found the little table to buy animal feed from, so we went back in and fed the ponys, goats and llamas. Well, Scott fed the llamas, I though they looked mean. We had to team up to feed the goats, there was one mean goat, the biggest of course, who would head butt all the little goats out of the way to get the food. So I stood at one end of the pen and fed the meanie, who also tried to eat the strap on my bag, while Scott fed the little ones. After we washed all the animal slobber off our hands we headed home so we could put some of our groceries to good use for dinner.
But that's another post.
Happy Monday!
Posted by Sara at Monday, April 28, 2008

We have driven by that DeMille before but have never stopped. Guess we'll have to next time, the kids will love it.

What a fabulous day!
What's with you though, going off without the camera.
I would love to try that smoked habernero and jalapeno! Gort's only has Gouda? Sounds like a wonderful place.
The gingersnaps sound great, hope they'll share.
Glad you washed your hands ;))

I wish we had a good farmers market locally. We live near Dallas and what happens is the "farmers" stop at the local produce wholesaler to buy their wares for the market...BIG sigh.

Tanna - they also make feta, quark, and one other kind of cheese that has a long funny name. It's very very strong, and I don't like it very much.

Marye - Yeah, that happens in Calgary too.

That selection of cheeses sound really good. I often leave the farmers market with lots of goodies! I can't wait for the fresh local produce to start showing up again.

I have been to Gort's as well as De Milles in Salmon Arm. I used to have relatives in Sorrento and still drive up that way once in a while. K-town has it's own goat cheese farm...Carmelli's as well.