Cook Most of the Book - Vegan With a Vengeance

Well, it's Tempeh time, let's get started. This week I've done 4 recipes, although technically 3 of them were done for one dish.

I bought the tempeh a couple of weeks ago. I had a harder time that I'd expected finding it, and when I did, I snagged the last package. Before I bought Vegan with a Vengeance, I'd never heard of Tempeh, and until I bought it, I'd never seen Tempeh. Here's what it looks like: 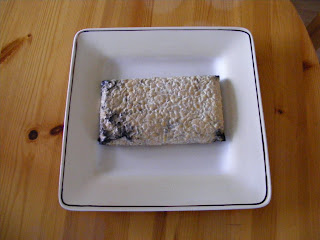 Frankly, not very pretty. The package said that the black came from the processing (or something) and doesn't mean the tempeh is bad or anything. I can see why they need to have that on the package, it's not very appetizing. Thank God Scott was sick in bed the night I made this. If he'd seen this, he would not have even humored me with sampling the finished product.

Isa says: "...don't be afraid to experiment with it (in different dishes)." 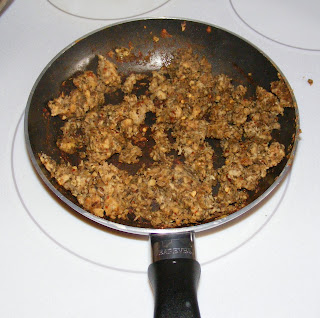 I tried. I really did. I wanted to like this. I liked the spice mix (fennel, basil, oregano, hot pepper, sage) and I thought the end result looked like sausage. But I had issues with the texture and the smell. Scott, who was as I mentioned was sick in bed the day I made this, didn't think much of it either. He didn't care for the spice very much (he hates fennel) and didn't like the texture either. But hey, we tried, right?

What I'll do differently next time: Nothing. There won't be a next time.

Isa says: "(this) biscuit recipe has served me well for years." 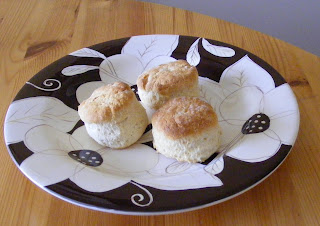 I love me a biscuit, and these are really nice and flaky. I cut them into the requisite 2 inch rounds, and boy, did they look small. But they were still yummy. I served the above plate of warm biscuits to Scott in his sick bed. They didn't make him better, but he liked them.

What I'll do differently next time: Make 'em bigger!

Isa says: "The gravy is a modified version of a recipe submitted to my Website by someone named Lisa."

Sara says: "It's like pea soup on a biscuit!" 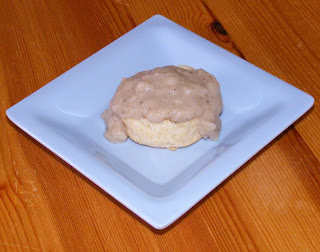 Actually Scott said that. I omitted the tempeh sausage crumbles from the gravy, so this was just white bean gravy on the biscuits. Pretty good, for a can of beans with some broth and seasoning.

What I did differently: used dried sage instead of fresh.

What I'll do differently next time: This was pretty good, but I'm not sure I'd make it again.

Isa says: "Coconut and nutmeg are a great combination" 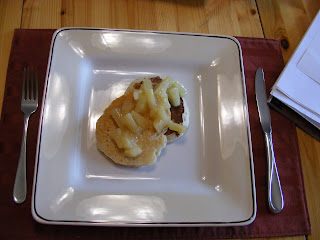 Coconut is not my favorite thing in the world, but these are nice, and the coconut and pineapple really transform a plain pancake. I'm used to pancakes and waffles not really tasting like anything. I love how Isa adds nutmeg (in this recipe) and other spices to her pancakes and waffles. I would make the pancakes again, but I'd probably play with the pineapple sauce. (PS, have you made the pumpkin waffles yet??)

What I did differently: cut back the coconut to 3/4 of a cup.

What I'll do differently next time: Nothing.

Well, I'm disappointed we didn't like the tempeh. But I'm glad we tried it. Unfortunately I'll be omitting any other tempeh recipes from this challenge. There's no point in cooking with something we won't eat.

But you wouldn't know if you didn't try! So I say good job.
The bean gravy is intriguing. I've tried for years to find a gravy my veggie/vegan son would like. All I've gotten to were OK but nothing over the top good. That's what I have my heart set on;))

I think that because I took something away from the gravy, you'd need to play around with adding ingredients to make it really good. Does your son have this book?

I'm thinking, based upon your photo of the tempeh, I'd be in Scott's camp! That just looks gross...

The biscuits sound yummy and I'm intrigued by the gravy.

I'm really enjoying this series Sara! While it won't convert me to a Vegan, it will make me try a few vegan recipes.

I still want to try tempeh - but I'm so glad I read your take on it. I'll never be a vegan - or even a vegetarian - but I love this stuff!

Have you considered adding bacon to most of these recipes?

Sara, I've had so many recipes come out badly, you can't let this get you down. Larry the Cable Guy and I insist on it!

At least you gave it your best shot!!! I'm not sure I would attempt it at home myself, but if a nice vegan friend made it for me I would give it a try too:D

I just can't get down with tempeh! :):) I'd rather do a water fast! Glad someone else fails to find its charms!

Sara, you really shouldn't give up on tempeh yet! I have a recipe coming to Lisa's Kitchen soon that you might like to try. Stay tuned. It just might tempt you :)