Lucky you, you're getting two weeks of market in one! Last weekend was a combo of being busy and lazy and there was just no time for posting.

I finally got a chance to visit Heartland Foods last Friday. Their store is small, but they offer an amazing array of locally produced fruits, veggies, flours, honeys, etc. They've also got locally raised meats - organic, free range which is awesome. They are only open Monday to Friday, but open until 6 on Wednesdays for your after work shopping. We picked up some tomatos, a cucumber and an organic chicken, not shown here but you'll see it soon. 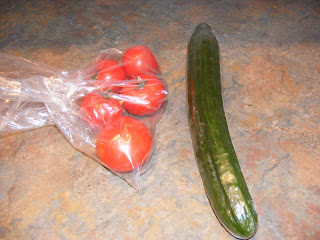 Also last Friday we visited the first night of the new Farmers Market on the North Shore in Kamloops. It's being held at McDonald park every Friday night from 4 to 8 (I think). Being the first night the market was a little small, but all the vendors were super nice and very enthusiastic. We bought some stuff for our garden - basil, a pepper plant, a zucchini plant and some sage. 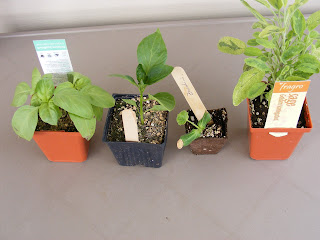 Then last Saturday we went to the downtown market. There's still not a ton of produce available. We shared some bannock spread with raspberry jam after Scott stood in line for ages, right now they are the most popular stall at the market - and came home with some celery plants, a watermelon plant, and a container of Wild Mushroom Curry powder from Forest to Fork. 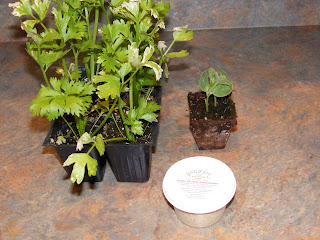 The rest of Saturday was spent in the yard, sitting on the porch and enjoying the sun. Later we made beer can chicken with the organic bird we'd bought the day before. 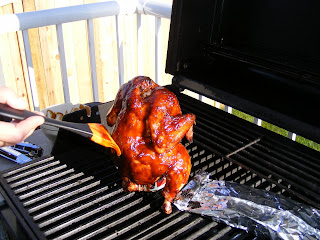 Yesterday morning we headed downtown for the Saturday market. After sharing a bannock with jam for breakfast, we got to shopping. There were more vendors this week, but most of the new ones were selling plants. Still not a ton of fresh produce. My Dad, who went to the market later in the morning, asked one of the vendors who was selling plants when they would be selling veggies. He was told that the cooler weather we had has pushed most of the produce back to mid or late June.
Yesterday we bought: buns, sausages, spinach, 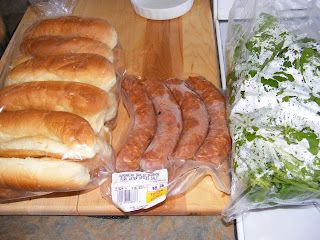 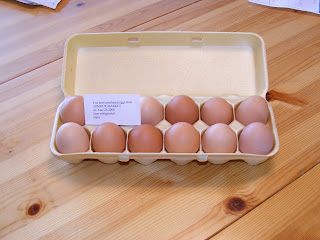 and 2 lettuces and a parsley. 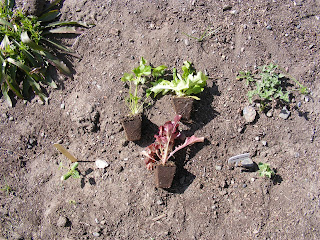 Beer Can Chicken. Wash and dry your chicken. Pick your favorite spice rub and rub it all over and inside the chicken. I used my lovely rub that Jasmine sent me a couple of months ago. Jasmine correct me if you read this, it is this recipe? Cover and refrigerate for at least an hour. When the time has come, take the chicken out of the fridge, and heat your bbq. Get a can of beer, open it up, and drink (or have someone else drink) half of it. Take your chicken and beer to the bbq, along with a pair or two of tongs, and a washable oven mitt or kitchen towel.
Get your bbq ready - if your bbq has burners running vertically, turn off one side. That is the side you will put the chicken on. Our burners run horizontally, so I turn off the front burner, and turn the middle burner down to low. However you do it, you can turn the heat up or down as needed during cooking.
Push the chicken securely onto the beer can, and place on the grill. Move the chicken legs to stabilize the bird if necessary. Then go wash your hands. When your hands are clean, slather the chicken with bbq sauce, lower the cover and leave for 20 minutes. Check your heat, and adjust if you think you need to. Use the tongs and your kitchen mitt or towel and rotate the chicken by about 1/3 (so a new side of the chicken is facing the more direct heat). Slather with sauce again, close the lid and leave for another 20 minutes. Then rotate and slather again. After an hours cooking, give the chicken a check for doneness. If it's not ready, give it another turn and slather and check in another 20 minutes. When it is ready, turn off the bbq and have a plate or bowl standing by. Be very careful while you remove the can from the chicken. I do this at the bbq, so if I spill the beer can it's going to spill on the bbq, not in my kitchen. Grab the can firmly with one pair of tongs. With another pair of tongs or a kitchen towel, or both, grab the chicken. Gently twist and pull the chicken off the can. Put the chicken on a plate. Set the beer can aside to cool before tossing it out.
Posted by Sara at Saturday, May 24, 2008

Isn't spring exciting? I too started a small garden this weekend. I planted some herbs, tomatoes, and hot peppers in large pots.

Oh my goodness yes beer can chicken. We should put that on the grill soon.

Your beer can chicken looks so delicious! I don't have an outdoor grill, so I have to just try to savor the flavor from your picture!

Yes! That's the recipe. Glad you like it. The chicken looks amazing...

My organic chicken is comiong out of the freezer this morning. Beer can chicken is in its future:D

I'd never heard of beer can chicken but can imagine every male I know having seen it made once will make it forever more. The next time the sun comes out in England (it could be a while!) beer can chicken it will be. Thanks for introducing us to it.

I am so envious of all your farmer's markets.. I wish we had more here.

This comment is going to be long, because it's for the past 10 posts or so - cuz I'm late for work and can't comment on all of 'em. :P

I will try those pumpkin waffles! YUM! And OHMYGOD I am so kickin' myself in the ass not to have gotten in the Julia group - I freakin' LURVE onion soup. I've copied the recipe and will make it this fall.. I can't wait!

I want an asparagus plant! I've never even seen one! Maybe I'll finally get me arse out there in time for fresh asparagus from your garden! Ohh and speaking of garden - yours is going to be magnificent this year! :D

I'm so glad you have found so much use from the veggie book.. that bread pudding with the spinach, gruyere & shrooms looks to die for.. send me the recipe? :D

The shroom & pecan pate also looks and sounds amazingly good.. I shall make it for my first party of the season in just a few weeks! Squeee!

And finally.. what the fakk IS tempeh, anyway? It looks like a block of spores. And I don't mean that in a good block of spores way (if that's possible?). :P

Have I ever told you how much I love the way you cook? So many different things.. such a variety.. you are fearless in the kitchen and I love that about you. :)